Germany Thirty Years after the Fall of the Wall 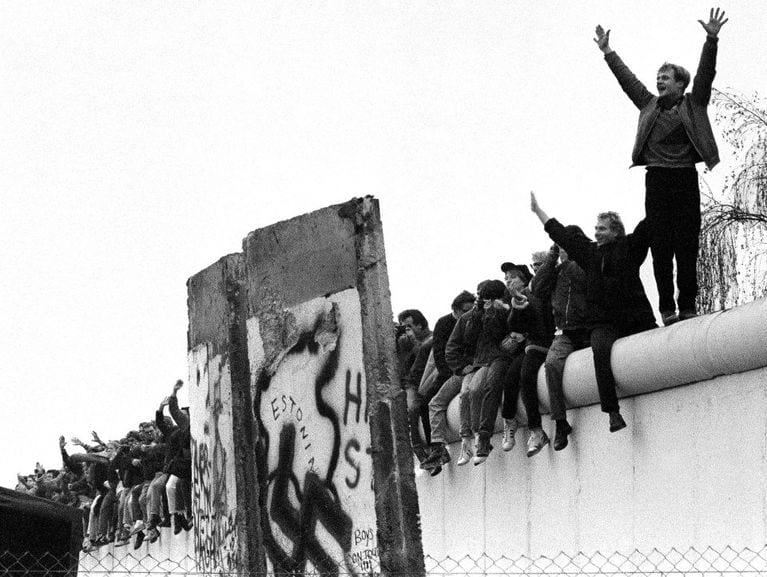 What a difference thirty years make! They brought the sun and the flowers where there used to be rain and storm. Now there’s a rainbow before the country.

On August 13, 1961, the communist German Democratic Republic, GDR, began building a wall, a so-called “anti-fascist bulwark,” between East and West Berlin. The wall 91 miles long, which at first was barbed wire was strengthened with concrete blocks. Its real objective was to prevent defections from east to west Germany. The communist regime, founded on October 7, 1949, was led by Walter Ulbright with Leninist beard and style of Stalin, as a totalitarian system. Between 1949 and 1961 more than 2.7 million had fled to the west.

Berlin was 100 miles inside East Germany. In June 1945 the city was split, the Soviet Union took the eastern half, the other war time Allies split the eastern part. A number of checkpoints, most famously Checkpoint Charlie, were access points for westerners to cross the border. The wall for 28 years was the symbol and icon of the Cold War, vividly immortalized in literature by John Le Carre, and films such as The Third Man and Dr. Strangelove. The wall lasted for 10,316 days, but a longer period has elapsed since its fall.

The wall lasted in spite of Western criticism. President J.F. Kennedy on June 26, 1963 before a crowd of 120,000 people outside West Berlin’s City Hall, declared, though with bad accent, “Ich bin ein Berliner.”  On June 12, 1987, President Ronald Reagan called on Russian leader Mikhail Gorbachev to “tear down this wall.” Ironically, a piece of the wall is now in the Reagan presidential library. The beginning of the end came after communist Hungary’s decision in August 1989 to open its border with Austria, evading East German border controls. On November 9, 1989 the head of the East German communist party announced that citizens of GDR could cross the border. Some left for the west, others began destroying the wall.  Today, only a single watchtower is a physical reminder of the border.

Symbolically, the Cold War had ended, and with remarkable speed Germany was reunified on October 3, 1990. Since then the unified country been politically dominated by the Christian Democrats, CDU, heading coalition governments, led by Helmut Kohl, Gerhard Schroder, and Angela Merkel, advocates of peace and economic prosperity. The old feared “German Problem,” a dangerous, aggressive country because of its geo-political position, disappeared in the thirty years since the wall fell for three reasons.  First, the dynamic German economy made it the dominant economic power and the largest national economy, and the largest manufacturing economy in Europe. Germany today is fourth in GDP in the world. Its GDP in 2018 was $3.9 billion in total, and $48,000 per capita. The unemployment rate is 3.4%.

Secondly, it has been the motor force for European integration, the central center of the European project, and supporter of the euro. Manifestations of nationalism have been reduced while internationalism has been emphasized. The old fear of an aggressive Germany needing an international balance of power to check it was gone with the development of a pacific country committed to NATO.

Thirdly, German for the most part acknowledged its responsibility for the Holocaust, and guilt for the Nazi genocide.

The key political figure, actual and symbolic, in recent years has been Angela Merkel, the most powerful woman not only in Europe but, for many, also on the world stage. Merkel, born in Hamburg, daughter of a pastor, was brought up in east Germany, and became a student of physics and chemistry, earning a doctorate in quantum chemistry. She entered politics in 1986 in east Germany, then after reunification was elected to Bundestag in 1990.  She has held a number of governmental positions before becoming Chancellor in 2005, from which she will withdraw in 2021. It is significant that Merkel is first Chancellor to have grown up in east Germany, the youngest person to become Chancellor, the first born after World War II and the first with a background in science.

Her career illustrates the path that Germany has taken internationally. Merkel played an important role in the EU, was president of the European Council, was central to the Berlin Declaration signed in March 2007 and the Treaty of Lisbon signed in December 2007. The Berlin Declaration provided impetus to reform of the EU after attempted ratification of a European Constitution had failed. The Lisbon Treaty amended the treaties that form the constitutional basis of the EU in order to improve the efficiency and democratic legitimacy of the Union. Merkel has always wanted to strengthen European cooperation, and international trade arrangements. She called for an integrated European military force, one that would not undermine NATO but be complementary to it. However, the proposal does suggest the establishment of a European army in the future.

Merkel has been both a Europeanist and a proponent of transatlantic partnership and relations with the U.S, supporting the U.S. led invasion of Iraq, and critical of developments in Turkey. But Merkel , in similar fashion to other European leaders, has not solved the immigration problem, nor  succeeded in attempts to build  an acceptable multicultural society. She caused a major problem in 2015 when saying that Germany would process asylum applications from Syrian refugees if they came to Germany from other EU countries; 1.1 million people came.

Germany today confronts two problems: the inequality between parts of the country; and growing nationalism with the increase in the far right in old communist territory.

Merkel has not solved the problem left by history, the acute differences between East and West Germany, the economic gap, perceptions of political alienation, and psychological grievances. The standard of living and annual income is much higher in the west of the country, such as North Rhine -Westphalia, and lowest in the eastern states, the old communist areas, such as Brandenburg and Thuringia.

Many in the East see themselves as second class citizens. This is similar to and familiar in France with the protests of gilets jaunes, the urban-rural divide, or class distinctions. The problem has now surfaced with the feeling of easterners that refugees are receiving more help than they are. The success of Merkel, and that of Joachim Gauck, president 2012-17, are seen as exceptions to the negative experience for other easterners. Westerners have the top jobs in politics, federal courts, military, and business, even though the East has 17% of population.  Incomes in the East are about 85% of the level in the West and life expectancy has increased. Yet about a quarter of the East has moved to the West, mostly women, causing Eastern areas to be deserted and hence lower tax revenue and fewer schools.  The population of the East is older with larger numbers of over 60s. Stark differences between East and West exist. GDP per capita of East is only 73% of that in the West. Unemployment is higher, average monthly salary is lower.  The 5 eastern federal states have lost more than 2 million or 15 % of total population. The younger and better educated were first to leave, and women more than men

The East is seen as the birthplace of Nazism, and now far right, part of which is neo-Nazism. It is psychologically puzzling that these formerly extreme communist areas should now vote for what is the opposite extreme. In the free society of which the East is a part, conditions have improved to a considerable extent it is troubling that in the East there are echoes of military nationalism, as well as fierce anti-immigration, and dissatisfaction with the status quo.  About half the easterners identify with their region seeing themselves natives of East Germany rather than as Germans. Some even consider the easterners were the true victims of World War II, and they had experienced “ethnic cleansing.”

The far right party, AfD, Alternative for Germany, that dislikes both Muslims and Jews has become prominent in those areas. In Germany as a whole it won 12.6% of the vote, and is the third largest group in the Bundestag. In Saxony, it came first, winning 27.5 %, and in the town of Gorlitz 33%, and in surrounding areas 45%. It increased from 9.7% and 14 seats in the previous election. In Thuringia, AfD got 23.5% of the vote, up from 10.6% in 2014.

The increasing strength of the far right parties is a danger to the peaceful, non-aggressive, democratic nature of Germany since the fall of the wall. It is a specific danger to the Jewish community, explainable by the “lifting of inhibitions and  the uncouthness on the rise in society” according  to German commissioner  Felix Klein. He had changed his mind as a result of the increasing number of antisemitic attacks. In May 2019 Klein suggested Jews not publicly wear identifiable signs, yarmulkas or Star of David jewelry for safety. The question now is whether it is still safe for Jews to live in Germany.