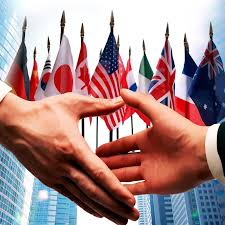 One may be forgiven for believing that Hollywood has moved to Washington, D.C. Instead of James Bond, the political scene is full of heroes and villains, allegations of international spies, contacts of officials of the Trump administration with Russian intelligence operatives, if not with President Vladimir Putin himself, and illegal intercepted phone calls. Though the scenario is amusing, and diverting, so far it lacks evidence of collusion between the two sides to influence the 2016 U.S. presidential election, or any aspect of policy.

It is less amusing but more important for the political and media worlds to turn attention from obsession with the reporting on publicly unrevealed phone calls to more sober topics such as global trade, the possibility of a trade war, and the tax agenda of President Donald Trump that may affect that trade war.

At the heart of the issue is the process of globalization, theoretically the interaction of economies, capital, investment, societies and cultures and migration of people through greater communication and trade between the countries of the world. It was present at the end of the 19th century with free trade, mass migration, and capital flows. More pertinent, globalization has stemmed after World War II with the new institutions such as IMF, 1945 World Bank, with the intention that global interaction was more likely to lead to peace and prosperity more than economic nationalism.

Elites thought free trade and globalization would raise all living standards, as well as bring a more peaceful world. No doubt gains have been realized by globalization, free trade and financial flows, and part of the gap between rich and poor countries has been reduced, but the gains have not been equally shared. It has raised incomes of the world’s poorer economies at the expense of the West.

Globalization is disruptive, destabilizing and unfair since the global market is highly competitive. Some countries, Japan, China, South Korea, have benefited, while others have not. One consequence in defense is protectionism and rules ostensibly based on factors such as food safety and intellectual property.

The Trump administration is now facing the problems of globalization and begun to take action. Trump has announced policies including preventing US companies from shipping jobs abroad, by various means including border taxes. He argues for bilateral trade agreements, but also for tariffs on imports to protect US manufacturing.

Is this sufficient? Globalization can only work if all countries abide by the same set of rules, but most countries, as the economist Dani Rodrik has argued, is that it is not possible for all three factors, democracy, national sovereignty, and globalization, to coexist.

Because globalization has led to a global redistribution of wealth and in the US to unemployment in some enterprises and to reduced wages for blue collar workers, the US has needed to provide safety nets, and government investment in job retraining. Candidate Trump on June 27, 2016 held that globalization made the financial elite very wealthy, but left millions of US workers with nothing but poverty and heartache.

His response is to reject the Trans-Pacific Partnership (TPP), and to call for withdrawal from or renegotiation of NAFTA. It is highly likely that utterances of this kind contributed to his electoral victories in states such as Pennsylvania, Wisconsin, and Michigan. Many US citizens believed that the existing political and cultural elite were more concerned with foreigners than with US citizens, especially the unemployed working and middle class.

In developed countries, income has shifted from labor to capital. The share of income going to the top 1% of the wealthy has increased in countries such as the U.S. and UK. Workers with higher education and better skills have benefited more than others. Globalization has eroded job security for middle and lower income families, and made some jobs redundant. There has been a decline in well-paying manufacturing jobs, while low wage competition has benefited Mexico. Today, the U.S. has a $60 billion trade deficit a year with Mexico.

In the current world of rising nationalism, increasing attempts at immigration into the U.SA. and Western Europe with the consequent fear and resentment of foreigners, and spread of fundamentalist religion and terrorism, globalism has become suspect politically as well as economically. In multiethnic societies, people seek cultural security.

The US political world is divided between globalists believing that globalism is good and natural, and like “Davos man” that national boundaries are obstacles and should vanish, and those maintaining the priority of the nation state for the benefit of citizens.

It is an open question whether open borders hurt the poor. Trump is one of those who believe the nation state still matters. If jobs are outsourced they may not come back. The nationalist stance is not only economic in nature but also based on social and cultural factors, mainly immigration that affects schools, workplace and daily life, and fear of terrorism. In this regard it is populist, even nativist, which may be at odds with principles of democracy and equality.

In this view, free trade and protectionism, if necessary, will lead to greater prosperity and strength. Slower economic growth in the world has reduced support for globalization since growth is the most important factor reducing extreme poverty. At the core, the US must succeed in maintaining or getting jobs in industries vulnerable to automation or imports.

The US is facing the downsides of globalization in trade and migration. It must seriously consider the desirability of the Trump agenda, bilateral trade agreements plus tariffs on imports to protect US  manufacturing, plus a border tax on companies that move jobs out of the US.  Chinese currency manipulations cannot be ignored. A related problem is whether the Trump agenda will undo the growth benefits from his projected tax cuts and proposed spending on infrastructure.

Nor can the main issue of globalization be ignored. The country needs a healthy debate on the issue not only in itself but also in the context of whether the loss of manufacturing  jobs is due more to the process of automation than to trade globalization. A conversation on these issues may not be as enticing as James Bond but it would be better for the economic and physical health of the U.S.

PrevFather forced to move after renouncing Islam calls for action on hate crimes.
Window to the BackyardNext