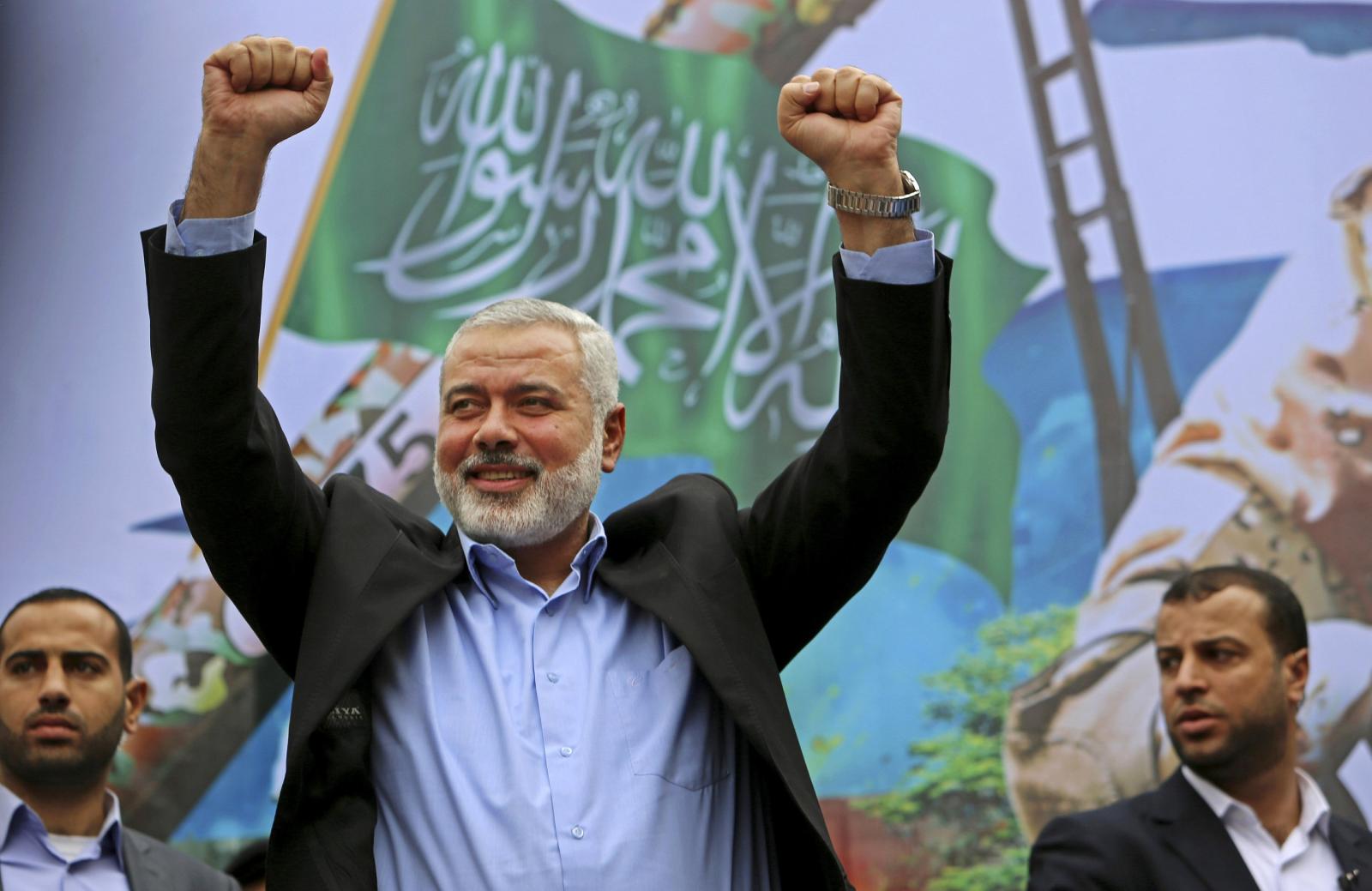 Bad men need do nothing more to compass their ends, than that good men should look on and do nothing.

In the British House of Commons on May 23, 1939, Winston Churchill explained the pledge of the Balfour Declaration of 1917. It was made to the Jewish people who through centuries of dispersion and persecution patiently awaited the hour of its restoration to its ancestral home. He did not feel that Britain had accorded to the Arab race unfair treatment. He spoke of the great experiment, the historic dream,  the magnificent work the Jewish settlers had done, making the desert bloom, starting thriving industries, founding a great city on the barren shore. So far from being persecuted, the Arabs had crowded into the country.

Churchill would be astounded on May 23, 2021, by the tensions between the State of Israel and Palestinians, and above all by the upsurge in antisemitism around the world caused by those glorifying the Palestinian terrorist group Hamas.

The national emblem of the State of Israel is one of olive branches surrounding a menorah. The symbol for the Israel Defense Forces is a sword wrapped by an olive branch inside a Star of David. The inference is clear: we seek peace but we are prepared to defend against our enemies. The emblem of Hamas is two crossed swords in front of the Al Aqsa mosque, with two phrases, God is Great, and Muhammad is the prophet of Allah. The inference is a call for Jihad, and the creation of an Islamic state in all of Palestine, from the River to the Sea.

The emblems symbolize the clear and absolute distinction between Hamas, a terrorist organization whose specialty is to target homes, people, businesses, places of worship with rockets, and whose objective is the eradication of Israel, and the State of Israel, which is 21% Arab by population, defending itself, with a policy of minimizing civilian casualties, from attack. The conclusion is clear. No peace is possible until Palestinians and other Arabs acknowledge the right of Israel to exist as an independent Jewish state.

This year, Jerusalem Day, the commemoration of Israel’s victory in the 1967 Six Day War, was marked by rockets fired into the Holy City. After eleven days of hostilities, the mutual and unconditional cease-fire took place on May 21. Hamas which had fired more than 4000 rockets, had suffered at least 240 dead, thousands of injured, and widespread damage of the Gaza Strip, while those rockets killed twelve Israelis. Prime Minister Benjamin Netanyahu claimed that degrading the military power of Hamas had been an exceptional success and had dealt a blow it could not imagine. Hamas celebrated the “euphoria” of victory, a “costly but clear” victory claiming it had brought life in Israel to a standstill and had inflicted a heavy blow to the image of Israel around the world. Hundreds of masked Hamas fighters with assault rifles paraded in Gaza City.

Did anyone win? Israel destroyed the “metro”, the 250 mile system of underground tunnels leading into Israel, many of the Hamas missile launching sites, assassinated a number of senior military commanders, sank the fleet of small unmanned submarines, used its impressive Iron Dome missile defense system, and damaged the infrastructure of the Gaza Strip. However, Hamas fired a number of missiles at Jerusalem, that ended debate in the Knesset. It claimed it had brought Israel to a standstill. It was able to incite Arab and Jewish citizens of Israel against each other, triggered anti-Israel violence in the West Bank, and boasted it not Fatah, was the savior of Jerusalem. Above all, it spread, directly and indirectly, the virus of antisemitism.

Hamas still has more than 8,000 rockets and several hundred rocket launchers. Hamas may be a terrorist organization but it has a sophisticated military apparatus, in weaponry, in strategic personnel, and with a considerable arsenal. The Hamas political leader, Ismail Haniyeh, proclaims that the fight against Israel will continue until the Al Aqsa mosque in East Jerusalem is “liberated.”

A number of factors are related to the Israel-Palestinian issue. One is the alarming announcement by Iran that it has unveiled a 1,250 mile range bomb carrying drone named “Gaza” in honor of those “who stood against the invasion of the Zionists.” This drone can fly for up to 35 hours   and can carry 13 bombs and 1,100 pounds of electronics equipment. It is not only a conventional military threat, but also a possible delivery mechanism for nuclear weapons. Iran has been advising Hamas on its tactics, and asserts that Israel has vulnerabilities because the Iron Dome system is vulnerable to large barrages of rocket fire. Hamas in fact was able to fire large barrages up to 135 rockets in five minutes.

A second factor is the rift in the U.S. Democratic party, both generational and political, indicating that support in Congress for Israel is no longer axiomatic. Except for Bernie Sanders, that support still exists among the party’s older leaders, Biden, 78, Chuck Schumer 78, Nancy Pelosi, 81, Steny Hoyer 81, who said we must not allow extremists to promote a false narrative. But increasingly outspoken are younger member of Congress and people of color who are critical or hostile to Israel.  Among them are the usual suspects, “the Squad,” Alexandria Ocasio-Cortez, Rashida Tlaib, Ihan Omar, Mark Pocan, Ayanna Pressley. All are opposed to the U.S. sending military aid to Israel. They introduced a House Resolution on May 19, 2021 to oppose the sale of $735 million of America made weapons to Israel. The Resolution was endorsed by more than 70 organizations.

The shift is important. The U.S. younger generation, especially in the Democratic party, is more sympathetic than their elders to the Palestinians. This is partly the result of the diversity of viewpoints in Congress: currently 23% of the House and Senate are people of color or of Native American heritage: in 1945 it was 1%. In general, there is more sympathy for Palestinians among voters under 40 than those over 60. For younger voters the presentation by the media and photos of images of destruction and deaths of Palestinians, published without context, is more potent than the memories of David Ben-Gurion or Golda Meir.

Even more significant is the refusal by the anti-Israeli brigade to acknowledge the impact of Palestinian propaganda on the upsurge in antisemitism.  In both the U.S. and the UK, thousands of protestors have taken to the streets chanting antisemitic slogans, causing damage, and blocking traffic. Wearing costumes, masks and face paint, and some draped in Palestinian flags they have smashed cars and burned Israeli flags.

In London, activists drove in convoys of cars through areas, Finchley and Golders Green, in north London, areas with considerable Jewish populations, shouting “F…the Jews, rape their daughters.” A rabbi in Chigwell, Essex was assaulted near his synagogue. A number of Jewish individuals have been assaulted in the streets, shouts of “Free Palestine” have been made  at random Jewish people,  threats  against  Jewish secondary school students, targeting synagogues, extensive  antisemitic content  and deluge of hate, especially on social media platforms. The use of cars, waving Palestinian flags and shouting  antisemitic slogans has taken place in other British  cities, in Manchester as well as north London.

The Community Security Trust indicated that there had been a fivefold increase in reports of antisemitic  incidents since the  escalation in violence by Hamas. Between May 8-May 17, 86    antisemitic incidents were recorded. In the U.S. there are similar alarming incidents, Jewish people being attacked in cities across the country. Particularly scandalous was the caravan of cars in Los Angeles whose occupants threw bottles and shouted antisemitic epithets at Jewish diners  outside a sushi restaurant.

The Hamas war has succeeded in inflaming tensions between Arabs and Jews within the state of Israel. The country in the last week has witnessed violence, burning of synagogues, cars, businesses, even police stations. Once again, as in 1948 the very existence of Israel is being challenged. the Palestinians continue to cling to the Nakba, the catastrophe, the creation of Israel. Fortunately for Israel, the Arab and Islamic states, except Iran and Syria, have not joined the anti-Israeli and antisemitic crusade.

The Biden administration must continue to support Israel’s right to self-defense against rocket attacks , and continue funds to help the Iron Dome system, while seeking with friendly countries,  Egypt and Qatar  to seek an end to the Israel-Palestinian conflict and negotiate a settlement. It should provide humanitarian aid to Gaza, to help repair the damage, but not help Hamas replenish its store of rockets. Biden and the U.S. should continue support for Israel in international organizations. He should strive to increase membership of the Abraham Accords.

Biden and the politicians in D.C., especially the younger Democrats, should recall the words of Churchill about the Jewish community  in the Middle East, a historic dream, a great experiment.    .

PrevEven the Arabs are Tired of Hamas
Academics Use Propaganda, Not Expertise, to Bash IsraelNext