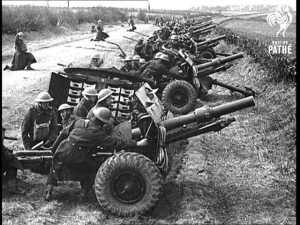 ‘Be it thy course to busy giddy minds
With foreign quarrels.’

The dying King Henry’s advice to his son was of course disregarded.  Henry V soon embarked on a foreign quarrel of his own, in person.  After a profitable period of arms manufacturing (‘Now thrive the armourers’) he invaded France and won a lucky victory at Agincourt against the most incompetent leaders in French military history.  After that he continued his wars in France, dying of dysentery or camp fever at the Chateau of Vincennes in 1422.  You can still see the room where he died, for a modest charge.  Foreign quarrels have limited usefulness.

Boris Johnson has an acute sense of the advantages of foreign quarrels.  They take attention away from the other looming problems of his rule, of which we need only mention the cost of living.  The giddy minds are seduced by Liz Truss, Foreign Secretary, who encourages volunteers to fight for the Ukrainians.  A century ago, she’d have been issuing male civilians with white feathers for their buttonholes.  She is not alone in her enthusiasms: when the Ukrainian Ambassador appeared in the Visitors’ Gallery, the entire House of Commons stood up to applaud him.  He must have been impressed with the unanimity of a free society.  Perhaps he knew that the Russian TV channel, RT, had already been silenced: the screen shows only THIS SERVICE IS NOT AVAILABLE.  A pity, that, I rather liked RT, it offered a welcome change from the monolith world-view of BBC and Sky News.  Telegraph readers were told in the editorial that ‘The tightly-controlled Russian media continues to pump out false accounts of the war.’  Lucky Brits, to have the truth laid on through the approved channels!  And to be sheltered from the fake news of Rus on RT!

Of the real news, I select the serial bombing of Ukrainian targets by the Russians.  Many civilians have been killed.  This is presented as a war crime which must be pursued to the Hague.  But the British have done it before.  At the Normandy landings on D-Day, the plan was to take Caen on the first day.  The landings on Juno beach were successful, but the following advance stalled and German resistance as so often made good the defences.  As Anthony Beevor drily remarked, after noting that artillery was the arm on which the Allied commanders relied, ‘the French civilians, not surprisingly, felt that they did so to excess.’ Caen did not fall, and Montomery changed the attack to bombing.  This was merciless, and the French population suffered greatly.  Not for six weeks were Caen and its environs controlled by the British and Canadians, by which time Caen was reduced to rubble.  Some 3000 French civilians died during the bombing campaign.  This fact should give pause to the widespread condemnation of what for the Russians is a regular practice of their system of warfare.

The media, and the political world generally, believe that they are witnessing a morality drama of good versus evil.  Yet this belief is simply picking sides in a conflict, each of whom has a distinct set of values. They also suffer from a related delusion: having denounced war, they believe that it is now in process of being stopped.  The disapproval of war must lead to its abolition.  However, the political advantages of war have not disappeared, nor has its continued existence.  What Shakespeare said of the one, his contemporary Sir Walter Raleigh said of the other: ‘The ordinary theme and argument of history is war.’

PrevPutin the War Criminal must be Punished
OUCH! A Balanced Diet on a Desert IslandNext