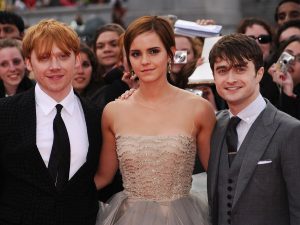 Hooray for Hollywood, screwy ballyhooey, phoney Coney, Hollywood, where you’re terrific if you’re even good, and strive to get your name up in lights, to court tabloid fame, and find the right role to play. There’s no people like show people, they smile when they are reprehensible.

One of the existing mysteries is why actors and celebrities, whose job is to misrepresent people and actions, are taken seriously when they pontificate on political, social, and economic events. The most recent example is the outburst of support from film professionals speaking out in support of Emma Watson, the 31-year-old British actress born in Paris, who shot to stardom as Hermione Granger in Harry Potter movies. and has become a well-known actress.

Watson, educated at Brown University, an outspoken feminist, who has declared Barak Obama as one of her heroes, issued an Instagram post, illustrating a pro-Palestinian political rally featuring Palestinian flags, overlaid with the words, “Solidarity is a verb.”  This somewhat bizarre and puzzling statement was apparently derived from the work of Sara Ahmed, a British-Australian scholar of feminist theory, lesbian feminism, and post colonialism, a theorist who argues that the struggle for women’s equality is related to other causes.  This scholar enlightened us, if obliquely, that Solidarity   does not assume that struggles are the same struggles, or that our pain is the same pain, or that our hope is for the same future.

The obfuscated utterance by Emma Watson, among other things a member of the “Free Palestine Movement” was accused of being antisemitic, though it was not a vivid political declaration, but kindly critics were led to suggest that her proper role was to return to Hogwarts for the 20th anniversary of the first Harry Potter film. Magic may work in the wizard world of Harry Potter, but so far has not ended the bigotry against Israel.

The usual Hollywood suspects, fellow members of Free Palestine, film professionals, came out in support of the criticized Watson. First, it is important to point out that almost all these more than 40 suspects from the film world are always willing to support a cause or petition that is anti-Israeli in nature, but apparently do not discern any problems from the other 92 countries in the world that deserve censure. To illustrate the suspects a few of them may be named:  Susan Sarandon, Mark Ruffalo, Maxine Peake, Charles Dance, Ken Loach, Jim Jarmusch, Viggo Mortensen, and Michael Malarkey. These intellectual giants helped us understand the mysterious statement that “Solidarity is a verb,” which they interpret as meaningful solidarity with Palestinians struggling for their human rights under international law.

These intrepid celluloid warriors oppose injustice anywhere in the world and stand with all those seeking an end to oppression. Sadly, their view of injustice in the world, and indeed their political knowledge of the world, does not appear to go beyond the actions and existence of Israel. Unobserved are the countless instances of that injustice: the Uighurs in China, the Kurds in Turkey, women in Pakistan, Christians in Syria, the Rohingya in Myanmar, Alexei Navalny in Moscow, or the terrorist actions of Hamas.

The Hollywood warriors are prone to fight the wrong war, involved as they are with their limited and biased view, making no effort to investigate prejudice and lack of solidarity in general.  As a minimum they might be conscious of the address of Mahmoud Abbas, now in the 13th year of his four-year term as President of the Palestinian Authority, PA, at the 76th session of the UN General Assembly in September 2021   that “this colonial regime, Israel, that has been established on our land will disappear, regardless of how long   it   takes.”

For the Hollywood crowd, essential reading is a report of the lack of solidarity and of mutual understanding, the encouragement of violence and demonization of the State of Israel and Jews.  This is a study, funded by the European Union, of Palestinian textbooks used to educate public school children  in PA administered regions which profiles rampant antisemitism and violent references in the texts. This is important because textbooks are crucial in influencing the images of history and of peoples in the minds of young people.

Some Middle Eastern countries, Jordan, Tunis, Morocco, even Egypt, have reformed educational texts and removed objectional anti-Jewish material, but not Iran or Syria which call for total struggle or jihad, or the Palestinian Authority, PA.

The PA had reneged on an agreement with the EU to revise its academic curriculum in 2021, and instead has promoted new material that features hateful language and violent imagery. It introduced new material with worse content than before. The children are now told that Jews are devious and treacherous, and that Israelis when they are mentioned are “Satan’s aide.” Students are asked to discuss the “repeated attempts by the Jews to kill the prophet Muhammad.

Israel is not mentioned in geography classes. In history classes the focus is on Jewish control    of international events through the money and power of Jews. Students are instructed to engage in jihad, which is “the private obligation for every Muslim,” and to remove Jews from Palestine. Incitement is virtually always present in Palestinian Authority textbooks.

The report, 200 pages long, examined 156 textbooks and 16 teacher’s guides. The critique is unqualified. The PA incites more than a million children to antisemitism, hate and violence.

The teachings are weird. School children are informed of a connection between the deception of Jews in the early days of Islam and the behavior of Jews today. Jews are cunning. Israel removed the original stones of ancient sites in Jerusalem and replaced them with ones bearing “Zionist drawings and shapes.”  The textbooks are full of negative attributions to Jews, all allegedly pernicious.

The prejudice is pervasive, not simply in subjects such as history, political studies, or religion, but in other subjects, such as mathematics    using a picture of Palestinians hitting Israeli soldiers with slingshots to illustrate Newton’s second law of motion.

Math is also taught by counting the number of martyrs in each uprising, those Palestinian terrorists who are always “martyrs.”  Students are encouraged by the result of their own martyrdom: seventy-two virgin brides will greet those who die as martyrs.

In geography, the State of Israel, always referred to as a “Zionist occupation” is erased.

A number of members of the European parliament has called for the withholding of aid to the PA over the books which preach antisemitism, incitement, and the glorification of violence and terrorism. It is astonishing that funds have been given by to the EU for the Palestinian educational program that has encouraged    hatred and violence, instead of promoting a peaceful solution to   the conflict with Israel. The policy of the EU should be to limit funding to the PA educational system unless it drastically changes the educational curriculum and focuses on genuine solidarity. Perhaps the EU might finance a film starring Emma Watson, or Susan Sarandon, portraying this point of view.  After all they’re only actors, not ideological combatants.

The most up to date feature in any revised PA textbook should be the news of the appointment in Israel of Osali Abu Assad to a senior judicial position.  She had been appointed as a Northern magistrate’s court judge in 2012.  Ten years later in 2022 she has been appointed Israel’s first female Muslim district court judge. Up to now, there had routinely been Arabs, all Christian, on the high court, and the next person is likely to be a female Muslim.  Will Hollywood film the ceremony? Or will Emma Watson or Susan Sarandon, play the role of this gifted Palestinian woman, an example of Solidarity in Israel.

PrevWelcome to the Machine
The other pandemicNext