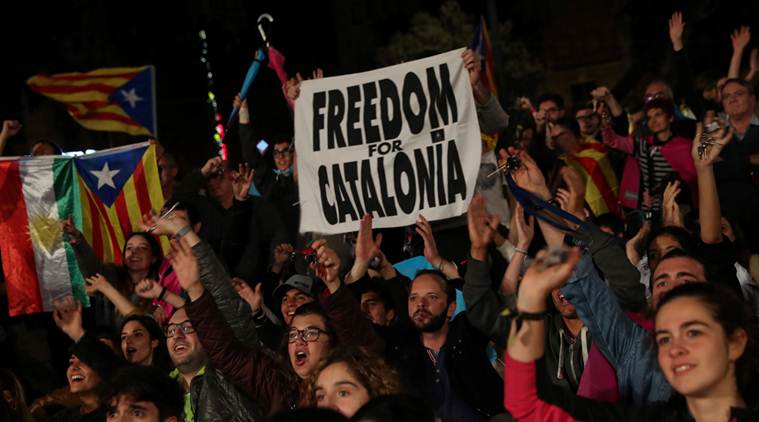 In a context of scenes of violence and disproportionate use of force by National police against citizens asserting their right to freedom of expression and peaceful assembly, the country of Spain is divided between a national government calling for respect for law and the constitution and national unity, and the authorities and people of Catalonia declaring the right to become an independent political entity. The case is still open between Spanish nationalists believing we’ll be together again, and secessionists responding, we get along without you very well, of course we do.

In his speech on September 19, 2017 at the UN General Assembly President Donald Trump somewhat surprisingly made some political philosophical remarks about the nation state, the best vehicle for elevating the human condition. He urged the need for “strong, independent nations that embrace their sovereignty, to promote security, prosperity, and peace for themselves and for the world.”

No one is likely is mistake Trump for Thomas Hobbes or for a formulator of the 1648 Peace of Westphalia that ended the European wars of religion, and called for the creation of nation states, based on territory, population, accepted central authority, and international recognition. Nevertheless, Trumps’ remarks follow the lines of classical concepts of sovereignty, states that result from independence of nations that are rooted in their histories and invested in their destinies.

The Trump administration is now faced with two issues, Catalonia in Spain and the Kurds in the Middle East, that challenge the sovereignty of the states in which regions exist by their call for independence or secession from an existing state in order to create a new state. The Catalonia issue is the more immediate and pressing one, and one that may affect the behavior of regions in other countries such as Scotland in the UK, Flanders in Belgium, Quebec in Canada, the Faroe Islands under Denmark, Chechnya in Russia, “Padania” in Italy, Texas in the U.S., and even Brooklyn, allegedly the country’s fourth largest town, in New York City.

Spain is a diverse country including people with different languages and cultures, and embracing 17 provinces that have autonomy and some devolution of power. It has long been troubled by regionalist demands. The immediate problem is whether Madrid, the capital of Spain, which won the football world cup in 2010, and has a red, yellow, red flag, will allow the secession of Catalonia, based in Barcelona, the host for the Summer Olympic Games in 1992, with its unofficial striped blue, red, yellow Estelada flag, as an independent state. If not, will Spain be faced with continuing violence and perhaps even civil war?

This kind of issue is not new in three senses. One is that a number of countries, for example Belgium, the Baltic Republics, the Czech Republic, have emerged out of larger ones. The second is the reality that the region desiring independence may be more developed than the rest of the country, as in the case of the Czechs living under the rule of the Empire in Vienna. A third factor is that minorities in a number of countries, Lega Nord in Italy, Alsace in France, may call for some form of devolution if not absolute independence.

Relations between Catalonia and the Spanish ruler have been strained since Barcelona its main city, fell in 1714 to Philip V, grandson of Louis XIV, and the area of Catalonia was subjected to the institutions and laws of the Crown of Castile. The problem was that Catalonia had supported the losing side, Archduke Charles of the House of Habsburg, Austria, in the war, 1701-14, against Philip of the House of Bourbon, for the Spanish throne. The region’s national holiday, the Diada, on September 11 commemorates the 1714 defeat.

In 1901 a Catalonian nationalist party was founded, based on the view that Catalonia was the most economically and culturally advanced part of the country, that its people spoke a different language and had a civil law from the rest of the country, and constituted a nation of its own.

There was indeed a short-lived Catalan Republic, 1931-39, that was ended with the victory of General Francisco Franco against the Republican regime in the Spanish civil war. The Catalonian slogan,” (they shall not pass) was to made famous by the Communist Dolores Ibarruri Gomez in the siege of Madrid in July 1936 during the Civil War.

In 1934 a Catalonian state in the Spanish Federal Republic was proclaimed, but this regional government, the Generalitat, headed by a president, Luis Companys, was abolished by Franco who also banned the official use of the Catalan language. Many Catalonians fled to France, including Companys, who was arrested by the Nazis, sent back to Spain, and executed, a martyr president.

The core problem is whether the Catalans constitute a nation? Catalonia, a wealthy region, is one of the 17 autonomous regions with considerable self-government, but it has long wanted more. The region, centered on Barcelona, has 7.5 million population, 16% of the Spanish population, accounts for 20% of Spain’s GDP, and 30% of foreign trade, is self-governing in certain areas, police, health and education, while Madrid still controls taxes, foreign policy, and infrastructures. Catalonia has its own widely admired regional police force, the 17,000 Mossos d’Esquadra, one that is responsible to the Catalan minister of the interior, in addition to the 5,000 state police.

Barcelona is now one of the world’s favorite tourist areas. It is the home of FC Barcelona, perhaps the most popular soccer team in the world, a nationalist symbol with the motto, “more than a club,” and potent rival of Real Madrid. It is also the locale of a more controversial inhabitant, the La Sagrada Familia Temple, the large unfinished Roman Catholic Church, about the structure of which there are strong mixed opinions.

For a decade, the relationship between region and state has become complex, resembling a political and constitutional crisis. In 2010 the Spanish Constitutional Court declared invalid some of the provisions for Catalan autonomy outlined in a 2006 statute, as well as in the 1978 Constitution. The Spanish courts and the central government hold that the 1978 Constitution, which was approved by 91% of voters in a turnout of 67%, is indivisible, and that the separatists are breaking the law.  Article 155 of the Constitution allows the government to suspend Catalan autonomy.

However, an unofficial non-binding vote in Catalonia in November 2014 registered 81 % favoring independence, though the turnout was only 35%.  In the regional election in September 2015 the separatist parties won. In November 2015 the Catalan legislature approved, 72 to 63, a plan for secession by 2017, but the Constitutional Court suspended the plan.

Then the 54 year old former journalist now president of Catalonia, Carles Puigdemont in June 2017, a fervent advocate of Catalonia as an independent republic, announced a binding resolution on independence would be held on October 1, 2017.  The question is simple: “Do you want Catalonia to become an independent state in the form of a republic, Yes or No?”  If the vote was positive, he would declare independence from Spain within 48 hours of the vote.

Political systems differ. In 2014, a referendum on independence for Scotland was held with legal consent of the central government in London. In contrast, the central Spanish government in Madrid headed by Prime Minister Mariano Rajoy, head of the conservative Popular Party, regarding the referendum held on October1, 2017 denies the legality of the Catalonian referendum. He spoke of the “indivisible unity of the Spanish nation, the common and indivisible homeland of all Spaniards.”

The Spanish government got rulings from Constitutional Tribunals that it is unconstitutional for a region to call a referendum. The powers of the Constitutional Court were increased in 2015 so it can enforce its decisions. The Court has struck down a number of laws enacted by the Catalan parliament, and in September 2017 imposed fines on members of the Catalan election board.

The national government argues, and the majority of Spaniards and the media agree, it is upholding the rule of law that must be respected; the separatists however speak of “authoritarian repression” and compare the actions by Madrid to prevent it with the brutality of Francisco Franco in attacks on the Catalan language, culture, and political aspirations.

About 5.3 million Catalans are eligible to vote. In preparation, on September 23, 2017 Madrid put all police forces temporally under a single chain of command reporting to Madrid. Four thousand more police were sent into the area. Separatist web sites were blocked, material and ten million ballots were seized, and police were told to stop public buildings from being used as polling stations. At least 14 officials working on arrangements for the referendum were arrested.

Nevertheless, most of the mayors in the 940 Catalan municipalities were pro referendum. The Catalan regional police, numbering 17,000, did not obey the court order to prevent voting if it inflamed local tensions. At the referendum on October 1, 2017 in which 2.2 million participated,  42.3% of the electorate, 90% voted for independence and 8% voted no. Yet, the violence in which about 850 Catalans were injured by the national police attempting to prevent the voting escalated the conflict over Catalnia, as well as hardening political positions in the country.

Logically, the next step is now that the official result has been announced for it to go to the Catalan parliament which could then adopt a motion of independence, a real possibility since separatists have a majority, 72 of 135 in the parliament. But all sides in the country are toiling with the problem,  What price victory?