How Do You Eat Blueberries and Celebrate Next to a Death Camp? 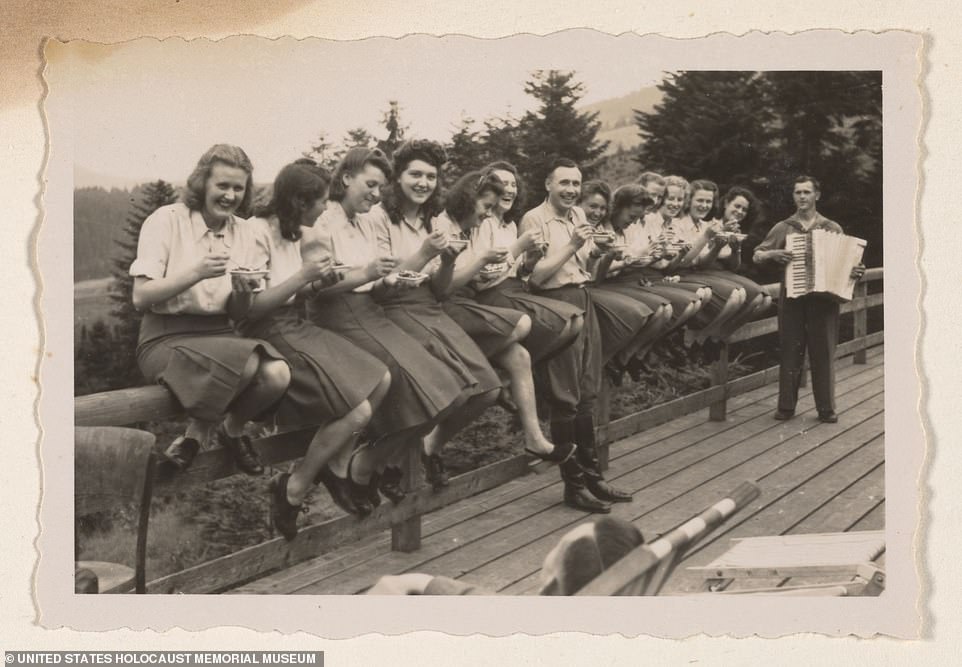 Speculation on rendering moral judgement of human behavior, as Thomas Jefferson warned, must be “hazarded with great diffidence.”  Countless issues arise.  People change behavior based on the influence of others. Acute diffidence is necessary when considering controversial experiments on obedience, such as that by Stanley Milgram, Yale social psychologist, in 1961 in which students, ordinary people, obeying orders, were willing to assist in inflicting pain on other persons. And an even more urgent question arises in relation to judgement of human behavior: Are moral and ethical considerations always relevant to political action?

The revelation of 116 photos, taken during a three-month period, May to July 1944 of individuals connected with servicing the world’s most notorious death camp, Auschwitz-Birkenau, well dressed, comparable to normal people on vacation, are chillingly bewildering examples of the complexity of the human condition. Diffidence must be applied to these photos depicting good times being enjoyed by individuals usually seen as sadistic, psychopathic, monsters capable of human cruelty, for at least two reasons.

They portray ambiguity and contradictory elements. On the one hand, the people in the photographs look like ordinary people on vacation. There are no images of horror, and everyone seems normal.  On the other hand, the photos were taken during the months when the Nazi staff at Auschwitz-Birkenau processed 142 trains carrying 434,000 Hungarians to their death in Auschwitz, within hours of arrival at the camp. One would expect to see photos of the meetings of senior Nazi figures, Richard Baer, Rudolf Höss, first commandant of Auschwitz, who returned to Auschwitz to observe the killing of the Hungarian Jews, Joseph Mengele, and Joseph Kramer, the beast of Bergen Belsen, some never brought to justice. Most disturbing are photos of an accordionist leading singing by 70 SS officers including Otto Moll, supervisor of the Nazi gas chambers, Mengele, and Kramer.

Even more disturbing are the images of well dressed, seemingly, regular men and mostly young women, enjoying life. The image of smiling girls sitting on a fence, eating bowls of blueberries, looking as if they have no cares in the world,  is presented in a play based on photographs of individuals associated with  activities in the camp of Auschwitz relaxing in their private lives, sunbathing, eating berries, in a resort, Solahutte, specially built in Poland by the Nazis, about 20 miles south from the Nazis’ largest death camp, one in which over one million Jews were massacred.  The hamlet, mostly a country club, remained unknown, until 2007 when the album of photos of it was revealed. Located in a wooden area, suitable for hiking and relaxing, it was a sub-camp of Auschwitz where about 4,500, SS officers were stationed; it was a haven of tranquility.

The SS rewarded Auschwitz guards for their work, “well done” with a trip to Solahutte.

The photos were made by SS Obersturmfuhrer Karl Höcker, Chief First Assistant to Richard Baer, last Commandant of Auschwitz-Birkenau. Höcker remained at Auschwitz until its evacuation and fled just before it was liberated. He was captured by British forces and spent 18 months in prisoner-of-war camp. He then merged into post-World War II German society and worked as a banker. At a trial in 1963 in Frankfurt, he was held responsible for transport of Jews to Auschwitz-Birkenau, but the prosecution was unable to prove he was personally responsible in the killing process. Nevertheless, the court was able to find him guilty of aiding in the murder of 1,000 people, He was sentenced to seven years in prison but released early, in 1970. Höcker always denied any wrongdoing.

The photos dating between June 1944 and January 1945, consist of a series of snapshots of mundane activities in the resort, including the accordionist leading singing. Bowls of fresh blueberries were given to a group of young women and Höcker photographed them sitting on a fence, smiling for the camera. There are no photographs of any prisoners, or of any criminal or immoral activity, of killings or of forced labor.

The photos were taken when Auschwitz was particularly active with the killing of more than 400,000 Hungarian Jews who had just been transported to the death camp. The photographs disappeared after the war but were found by a US army colonel, a former counter-intelligence officer, in a photo album, in a trash can in the basement of an abandoned apartment in Frankfurt in 1946 and kept until 2007 when it was donated to the US Holocaust Memorial Museum.

How should we see the photos of these people, smiling, playing with their dogs, as ordinary individuals or as sociopathic monsters, as ordinary human beings or as preparators of human cruelty? Were they evil or normal people caught up in an atmosphere of hate?

The play, a multi-media project with dialogue taken from other records and interviews with the archivists at the US Holocaust Museum who have been doing research on the photos has been written by Moïses Kaufman, a stage director and son of Romanian Holocaust survivors who hid in a basement during the war and afterward, immigrated to Venezuela, where Moïses was born, and raised. His co-author is his colleague Amanda Gronich at Kaufman’s New York-based Tectonic Theater Project. In documentary style, the story is told from the perspectives of real people, who then discuss the impact of the exposure of the images, relating to the issue of why seemingly decent people commit murder and atrocities. The play titled “Here there are blueberries” opened on July 31, 2022 at the La Jolla Playhouse, California.

The central issue is the following: Should the fact that the inhabitants could participate in simple, everyday activities, laughing, singing, relaxing, eating blueberries be seen as a disturbing side of human nature, as people who were not monsters but learned how to commit evil? Höss was a farmer, Höcker was a bank clerk.

Kaufman has suggested that the photos pose questions about both culpability and complicity, and that these issues are important in American culture right now. Can we participate in ordinary every-day activities such as these depicted in the photos when tremendous injustices are being committed, without being complicit in those injustices?