I Know Your Time is Valuable But, Before Summing Up, Let Me Take Just a Few Moments to Say…… 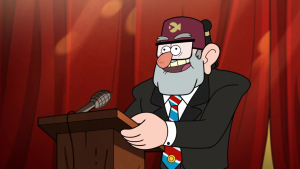 The best speech introducing a main event that I ever heard (and as a reporter I suffered through a lot of them) was from David Jacobs, a great British story-teller. The night I heard him at a London theater was very special and I was expecting two or three minutes of polished eloquence. He gave me and the whole audience much more, however. This was his entire speech: “Ladies and Gentlemen, Mr. Frank Sinatra.”

For me and, I’ll bet, every person there it was his finest moment. By denying himself a talk about how Sinatra was the greatest singer of our age or how he made every song a little work of art or how you felt he was always singing directly to you, he provided the time for an extra two or three minutes of an unforgettable (and, as you see, unforgotten) performance.

The second best speech I’ve heard was by a sailor in World War II when New York City was honoring several servicemen in a ceremony that — like all others of its kind, gave everyone who’d helped organize it a turn at the mic — and had already dragged on from inspiration to boredom.

This was his entire speech. “Ladies and gentlemen, normally I talk too much. Today I am speechless.” To the burst of relief and laughter that followed, the mayor, Fiorello La Guardia, added, “Phew! Couldn’t we use that boy on the city council!”

I thought of all this today when I read the words of a doctor, who has just received an award. This is her response.

“Dr. X has made enormous contributions to the community – in discovery, education, advocacy, and leadership – and I am incredibly honored to have been selected to give his namesake lecture at the annual meeting. I’m speechless actually. My relationships with patients – in the realms of clinical care, research, and advocacy – fuel my passion for [my work] and inspire me to seek innovative approaches to improving the health and well-being of people affected by [this] disease.”

I have no reason to doubt the award was richly deserved and her gratitude sincere. But speechless? If only…..