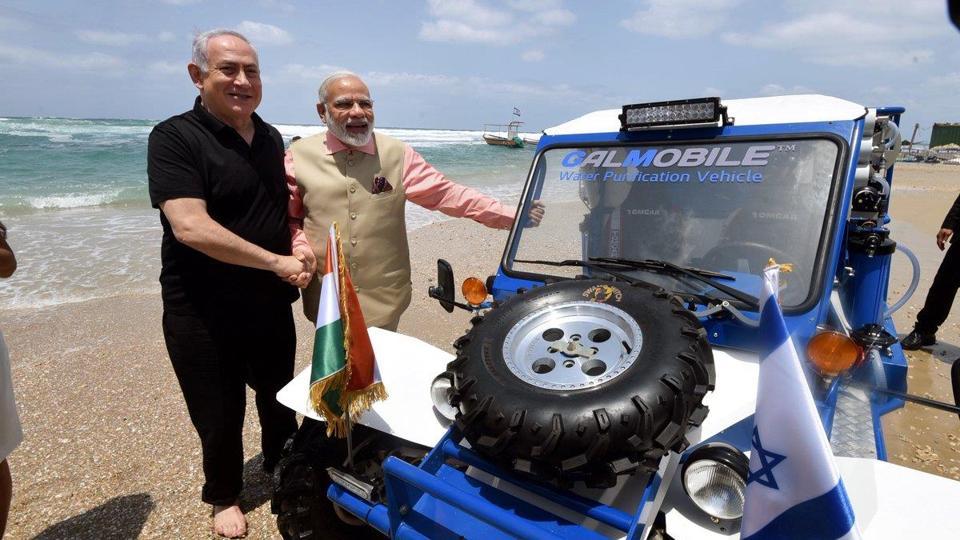 When I’m calling you will you answer too? As the song goes, “If you refuse me what shall I do.” Indian Prime Minister Narendra Modi, who took office in May 2014, had no cause for alarm. He received an enthusiastic grandiose response and warm embrace from Israeli Prime Minister Benjamin Netanyahu when they met at Ben- Gurion International Airport on July 4, 2017. After greetings by namaste, the salutation spoken with hands pressed together, the two prime ministers remained close during Modi’s three day productive and fence mending official visit to Israel.

Logically, the two countries, both democratic, officially secular, pluralistic, with diverse populations and substantial Muslim minorities, (180 million in India) have much in common. Both have absorbed substantial numbers of refugees. Both have and potentially still face threats of Islamic terrorism. Both promote a distinct national identity, one Hindutva, referring to the Indian nationalist movement, the other, the Israeli national identity, Jewish. Both have a free press, religious freedom, representative government, and an impartial judiciary.

Relations between the two countries were not always as harmonious as they appear today. Everyone knows of Albert Einstein, the scientist with the long, unruly hair, the inventor of the theory of relativity who won the Nobel Prize in Physics in 1921. Not everyone knows he was a modest man who rejected in 1952 the invitation to become President of the State of Israel. He lacked, he wrote in replying to the invitation in a letter on November 17, 1952 to Israeli Ambassador Abba Eban, “both the natural aptitude and the experience to deal properly with people and to exercise official functions.”

Yet, Einstein was deeply moved by the invitation since his relationship to the Jewish people had become his strongest human bond. An early example of this bond was his attempt in 1947 to persuade Jawaharlal Nehru, leader of the Indian National Congress party and prime minister, to support the establishment of a Jewish state. In a long letter of June 13, 1947 Einstein asked Nehru to favor “the rights of an ancient people whose roots are in the East,” and support the “glorious renascence which has begun in Palestine.”

However, Einstein was not able to convince Nehru, who despite having “a very great deal of sympathy for the Jews,” was concerned with India’s “national or selfish interests,” the problem of his country’s large Muslim minority, the need for support from Arab and Muslim countries, and concern about a likely conflict with Pakistan. The result was that India voted on the historic UN General Assembly Resolution 181 of November 29, 1947 against partition of Palestine, and the establishment of Israel.

India did not recognize the State of Israel until September 1950. Nehru explained the delay: “We refrained because of our desire not to offend the sentiments of our friends in the Arab countries.” Throughout the period of the Cold War India supported the Palestinian side. As one of the founders in 1956 and member of the Non-Aligned movement India tilted towards the Soviet Union and the Palestinians.

India would not allow its citizens to enter Israel on an Indian passport.

This unfriendliness persisted though Israel provided modest military assistance to India in its wars in 1962, 1965, and 1971, and was quick to recognize Bangladesh after India’s victory against Pakistan in 1971. Israel was the first country to recognize Bangladesh as East Bengal, India. In contrast, Arab nations did not support India in its dispute with Pakistan. Yet, despite Israel’s friendly actions, India did not establish full diplomatic relations with Israel until 1992, an act that coincided with the fall of the Soviet Union, an ally of India.

India’s subsequent relations with Israel have varied depending on the party in power, as well as on the changing international situation. Bilateral ties improve when a Hindu nationalist party or coalition, particularly the Bharatiya Janata Party (BJP) is in power. The first senior Indian minister after 1992 to visit Israel was L.K. Advani, BJP leader and Home Secretary who went to Israel in 2000. A game changer in relationships resulted from Israeli help during the Kargil war, in the district of Kashmir, when Israel, which was the first country to help India directly, supplied India with artillery shells, drones, mortars, and transport facilities.

Part of India’s response was refusal to join the condemnation of Israel during Operation Protective Edge, the war in the Gaza Strip, in July-August 2014. Henceforth, India dropped the word “condemn” but was only “deeply concerned” about the fighting in Gaza.  Noticeably, it has abstained from anti-Israeli resolutions at the United Nations, such as the one at the UN Human Rights Council in 2015 that blamed Israel for “war crimes.”

For two decades, India’s relations with Israel have increased in a variety of ways. Bilateral trade has expanded significantly. In the 1990s, the trade between the countries was about $200 million; in 2016 it was $4.5 billion. India accounts for 41% of Israel’s global weapons sales, and the two countries cooperate in production of high technology weapons systems.

India is still close to the Arabs because of its need for oil, and the presence of the large Muslim minority, 180 million, which is the highest number in any other non-Muslim country, in India. Yet its rapport with Israel, and its declared admiration for Israel’s accomplishments have developed into an open friendship. Interestingly, by coincidence already there are 12,000 Indian Jews in Israel, while 4,000 Jews remain in India.

Cooperation stems from mutual interest. Both countries created after World War II as independent entities have built their nation states on democratic principles. Both are troubled by being surrounded by military dictatorships, theocracies, and failed states. Both countries are imbued with a spirit of innovation. It is said in jest that in Silicon Valley the two most frequently heard languages are Hindi and Hebrew, occasionally interrupted by English.

That advance in innovation is crucial and is the spur. India is conscious that its development benefits not only politically, but mainly on increasing trade and cooperation with Israel. The cooperation extends from practical issues such as water supply, agricultural productivity, and business to security issues, counterterrorism, cybersecurity, and innovations such as encryptions and robotics. Indian businesses and entrepreneurs, like Tech-Mahindra, Reliance Industries, and the Tata Group have links with Israel’s private sector. Ignoring the biased Palestinian and other BDS groups, these firms enjoy ties with Israeli academic research units. At the same time, MASHAV, Israel’s agency for international development cooperation in developing nations, operates centers for technology for farmers, in 19 of the states in India. An agreement was reached in July 2017 between Walter-Gen, an Israeli company based in Rishon Lezion developing water generations and India’s sun group, by which the technology of Walter-Gen will be used in the Indian market.

History was made by the visit in July 2017 of Prime Minister Modi, leader of the nationalist party, BJP. Modi as a junior minister had previously travelled to Israel in 2006, was impressed, and promised to return which he has now done as PM.

Modi forthrightly expressed India’s need for Israeli help in soil, water, and agricultural management. Interestingly, his first visit directly after leaving Ben Gurion airport was to Danziger Flower Farm, one of Israel’s leading horticultural companies specializing in advanced agricultural technologies. It was recognition that Indian farmers are interested in deep irrigation and water security. As a compliment, the Flower Farm named a white chrysanthemum the “Modi flower.”

The visit of Modi, the first Indian prime minister to do so, is a recognition of necessity. India’s pro-Palestinian stance has not brought the country any rewards, India is rapidly modernizing and anxious to increase its technological and defense capabilities. It can find Israel a friendly partner in this objective. The conclusion of the visit showed this alliance in two ways. One was an agreement made between the two countries on a fund, starting with $40 million, to increase economic cooperation and research. The other was not only an inspection of a desalination plant, but also, almost a vision of the future, was a ride of Modi and Netanyahu in a vehicle that is said to transform sea water into drinking water. Here’s to life.

PrevTime for a North Korea ultimatum: Choose peace or obliteration
Police suspect others were involved in Manchester Arena attack – and may make further arrestsNext