Because the government is sensitive to world opinion, it lets its incarcerated child offenders live until they are 18. Then it executes them as adults 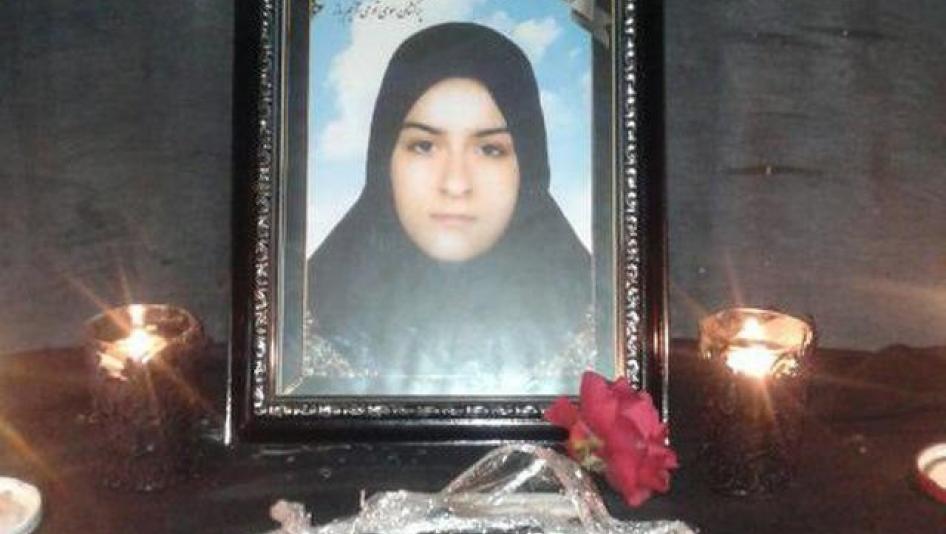 On Jan. 30, 2018, a young woman, Mahboubeh Mofidi, was executed by hanging in Nowsharh prison in northern Iran. She was 20 years old. Allegedly, she had murdered her husband and thus was condemned to death according to the Islamic Penal Code of the Islamic Republic of Iran. She was not the only one.

Mahboubeh was married to her husband when she was 13 and allegedly killed him when she was 17, with the help of her brother-in-law, who must have witnessed some terrible things. She was the third person executed by the Iranian regime during the month of January for a crime allegedly committed while she was underage. Even the UN has protested a “surge” of juvenile executions that have been taking place in Iran during the first quarter of 2018.

Mahboubeh was a child bride forced into an arranged marriage. Obviously, she did not give her willing consent. According to the Islamic penal code of Iran, based on Shia-style “Shariah” legal system, both fathers and grandfathers have the right to kill their daughters for various kinds of “immoral” behaviour. This kind of law incentivizes obedience in young, terrified child brides.

It is likely that Mahboubeh was forced into marriage by her family, then probably raped and sexually abused by her “husband.” If she later killed him, would we not conclude that she did so in self-defence after four years of abuse? Does this not go against every UN treaty on the rights of children signed by the Iranian government? Why would the Iranian government execute someone who was convicted before they were 18? Is this not against international law? Feminists should be outraged.

The answer is that in Iran they do things differently. They do not follow Western legal traditions. They have a different culture. And this culture is best understood when looking more closely at their Islamic Penal Code and how it is administered in that totalitarian dictatorship, dominated as it is by aging male mullahs. For starters, when it comes to child offenders, the Iranian government and its religious advisers have ruled that a female is a fully responsible adult when she is 13 years old and a male when he is 15. And so, when the authorities arrest, try, condemn and execute girls and boys under 18 for various crimes and misdemeanours, they are considered fully adult under the law and liable for the death penalty.

Forty seven per cent of Iran’s population is under 18. Iran is responsible for 73 per cent of all child executions in the world and it is the world’s top executioner of children. It also has the hi

ghest per capita execution rate in the world. Yet because the government is sensitive to world opinion, they let their incarcerated child offenders live until they are 18. They then execute them as adults. So, they have, in their own eyes, cynically lived up to their treaty obligations, the UN Convention of the Rights of the Child, which defines children as being under 18 years of age. This is how Iran covers up its cruel war on its own children. During the Iran/Iraq war Iran sent 100,000 child soldiers to be killed in battle by the Iraqis. In the government of Iran’s eyes, they were not really children.

It is hard to know how the Islamic Penal Code really works because the government does not give statistics as to who is arrested, tried and executed and for what reasons. It is almost impossible for the families of the victims to get full and unfettered access to court transcripts. There is no habeas corpus in Iran, nor is there due process in the Western sense. Arrested by the authorities, you can be interrogated and tortured before facing a judge who is, as the expression goes, also the jury and executioner.

In Iran, trials are often short and carried out in secret. When a family finds out that a member is charged with a crime and they manage to hire a lawyer, the lawyers are often harassed and sometimes arrested themselves, on trumped-up charges such as being agents of European or North American human rights organizations — a way to punish the human rights organizations who track the daily, monthly and yearly war of the Islamic Republic against it children.

According to the Islamic Shariah of the state of Iran if a man or woman is convicted of fornication four times, he or she can be executed (sounds like sex outside of marriage or before marriage). Fornication by a non-Muslim with a Muslim woman can warrant execution. Anal sex among adult males (over the age of 15) is justification for execution. Lesbians are condemned to death after they are caught four times. Possession of obscene audio-visual materials can be punished by death. When you are caught drinking alcohol for the third time, you can be executed. Theft is punished by death on the fourth count. Before that, there are amputations. If you are born a Muslim and convert to another religion, this is considered apostasy and can be punished by death. Killing of a non-Muslim by a Muslim does not automatically carry the death penalty.

In the democratic West, we think of murder as a fundamental violation of the social contract that guarantees our national safety and the safety of our loved ones. In Iran, murder is considered largely a private matter between families. If a man murders someone and is then arrested and tried, and even condemned to death, then the family of the deceased can receive blood money for the family member they have lost, and the murderer may go free.

Methods of execution in Iran are cruel. Hangings are often carried out in public in crowded places and act as both entertainment and threat. Victims are often roughed up and tortured before being brought out to hang. These hangings are often less than efficient, and death often only comes from asphyxiation after 10-20 minutes of humiliating agony. Exiled Iranian human rights activists such as Toronto-based Maryam Nayeb Yazdi have pointed out that stoning is still a viable legal threat in Iran, for both men and women, and that executions in general are rising.

Iran is an imperial, colonial state where the Persian-speaking demographic majority uses its state legal mechanisms to terrorize its occupied peoples. While it has always accused the West of imperialism and colonialism, it still occupies much of Turkish-speaking southern Azerbaijan. It has suppressed its own Kurdish minority who long for autonomy and independence as promised to them by the international community in the 1920s, and as a Shia majority state, it persecutes both Arab and Turkish Sunni Muslims living within its borders.

The Iranians have also destabilized Lebanon through its military proxy there, Hezbollah, and have sent it to fight Israel on numerous occasions. It goes without saying that the Iranian leadership periodically threatens to “wipe Israel off the map.”

In December 2017 and January 2018 thousands of brave young Iranian men and women took to the streets to protest the injustice which permeates the state of Iran and its cruel penal code. They

were quickly and brutally suppressed by the authorities. We can only imagine the torture, mental cruelty and kangaroo courts that have sentenced these brave young men and women to unjust prison terms and perhaps secret death sentences. Some of the bravest are the courageous young women who have publicly torn off their head coverings in protest of rule by men. In Iran, they are forced to wear the hijab. If they don’t, they would face arrest, imprisonment and torture. Here in Canada, the wearing of the hijab has been perverted into some sort of “human right.” What a contrast!

Our present Liberal government is under the influence of a strong pro Iranian-lobby. They would like Canada to reopen our embassy in Tehran and pursue extended commerce with Iranian companies, most of whom are owned and dominated by members of the revolutionary Islamic government of Iran. Justin Trudeau and his advisers know very, very well that all Iranian diplomats and government bureaucrats are members of the IRGC, the terrorist arm of Iran. Recently, the Liberal government financed Iran to the tune of $100 million to do business with Bombardier. Among expatriate Iranians living in the GTA, it is widely known that the men who often tortured them in Iran’s jails have bought real estate here and send their children to our schools.

Anything less than a continuing diplomatic boycott and the seizure of Iranian government assets here, as well as a ban on visits by their government officials, would be a betrayal of our democracy and of those Iranian-Canadians who have fled that Islamic dictatorship since the “revolution” that brought these evil men to power in 1979. It would also be a slap in the face to the children waiting in Iran’s prisons for their turn on the gallows. Canada must stand firm.

Geoffrey Clarfield is a Toronto-based anthropologist.