Is it Goodbye to Good Friday in Northern Ireland? 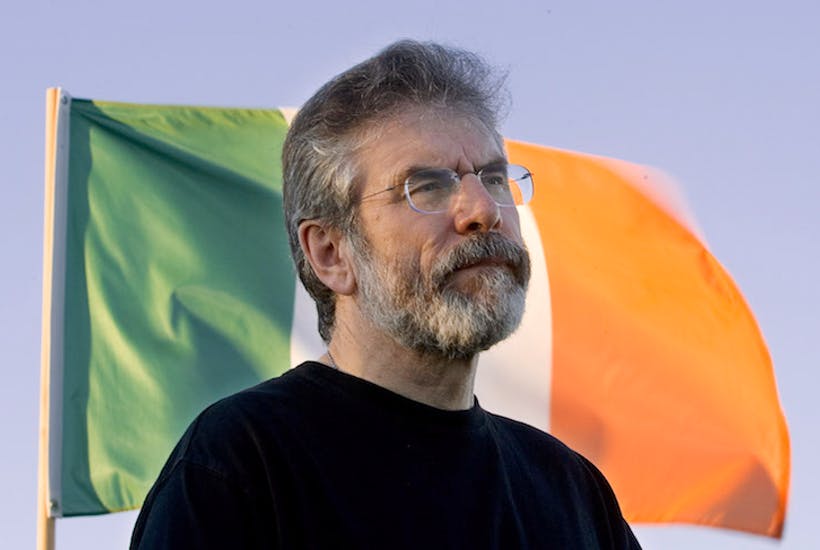 All or nothing at all, three quarters of a country never appealed to him, nor did the idea of a political entity called Northern Ireland that was created in 1920 comprising the six northeastern counties of Ireland in the province of Ulster. Gerry Adams is still adamant about the need for a united Ireland. As a political entity the Republic of Ireland, first called the Irish Free State was created in 1922. On November 18,  2017 Adams, the 69 year old president of Sinn Fein, the left wing political party, since 1983, announced it was time for a change and that he would not run for another term in 2018, or seek re-election to the Parliament of the Republic of Ireland, the Dail Eirean, which he represented in the border constituency of Louch.

Adams has been the dominant person in Irish republican politics for over 30 years, an individual whose activity made Sinn Fein, founded in 1905, a political force and a dominant group in the republican movement. He has been a major political figure, among other things an MP in the British Parliament in Westminster for the constituency of West Belfast for a number of years. However, like his party colleagues he was an absentee from Westminster, unwilling to  take his seat in order to avoid the obligatory House of Commons oath of loyalty to the Queen.

The essential controversial aspect of the complex Adams is the amnesia about his membership, role, and indeed leadership of the IRA, the Irish Republican Army. He had entered politics to defend the Catholic minority in northern Ireland from discrimination and attacks by Loyalist extremists, as did other Catholic republicans concerned with discrimination in employment,  housing, and police actions. His introduction was the civil rights march in Londonderry (Derry to the republicans) on October 5, 1968. But this led to his membership in the IRA which he never admitted and whose actions he never condemned.

Ambiguity surrounds him. Is Adams to be regarded as a terrorist or helpful in peacemaking? At the core of the problem is his denial, against the opinion of unprejudiced people that he was a member of the IRA. His father was an IRA member who was jailed for eight years for his activity in an ambush. Adams may, probably, have joined the IRA in the 1960s  and became its Commander. The armed wing of the IRA, the Provisionals, was a violent group to which 1800 deaths are attributed between 1970 and 1997.

It is almost certain Adams was a member of the IRA Army Council and was involved in the Bloody Friday July 1972 events when the IRA set off 26 bombs in and around Belfast. In recent years, Adams was accused of taking part , indeed ordering, in December 1972 the execution of a women, wrongly accused of being a police informer; her body was not found until 2003.

It is worthwhile to compare Adams with his long time associate Martin McGuiness, an acknowledged proud member of the IRA, who admitted his role, and who renounced terrorism and became the chief negotiator for Sinn Fein in peace talks.

McGuiness  is assumed to have been the IRA chief of staff., and the second in command of the 1972 Bloody Sunday massacre in Londonderry. But he became minister of education bewteen 1999-2002 in the power sharing arrangement, and  on May 8, 2007 became deputy first minister, under Ian Paisley, his former rival, the loyalist politician, Protestant religious leader, and founder of the Democratic Unionist Party, DUP.

On an historic occasion, McGuiness met Queen Elizabeth and exchanged handshakes, a highly symbolic union of nationalists and unionists. He even toasted the Queen at Windsor Castle. He was admitted, but Adams was not, to President Obama’s St. Patrick’s Day celebration, for “security” reasons.

But the legacy of Gerry Adams remains and the future of Northen Ireland remains unresolved. The republicans, mostly Catholic, primarily want to be part of the Republic of Ireland though the conflict is basically territorial, not religious.

The Northern Ireland entity functioned as a self governing region of the  UK, United Kingdom, with headquarters at Stormont, outside of Belfast, and controlled by Protestant Unionists who did not want to be part of a self ruled Ireland. Violence occured, with over 3,500 killed and more than 50,000 injured over the 30 year period known as the time of Troubles. It was the multilateral Belfast Agreement, Good Friday April 10, 1998, that set up a devolved system of government and introduced power sharing in Belfast. The coalition between the two groups ended in January 2017 when the chief nationalist group, Sinn Fein withdrew from the coalition. effectively bringing governing to a standstill.

Can peace come and the coalition be restored? Sinn Fein is now the largest left wing party in the republic of Ireland , with 23 of the 158 seats, and the largest national party in the Northern Ireland Assembly with 27 of 90 seats. If love is not present can hatred be ended between the two sides? As Adams is departing his party leadership,

Sinn Fein appears to have increased its demands, especially for the use of the Irish language to be given the same legal status as English and to legislate same sex marriages.

The Troubles of the late 20th century seemed to be over after the 3,600 killed between 1968 and 1998. The essential problem is whether Sinn Fein nationalists can return to support power sharing, or whether the problems of culture and identity will continue. Will Sinn Fein still honor the memory of IRA, and continue to commemorate IRA members killed in conflict?  The answer is made more uncertain because the whole issue is interrelated with the problem of Brexit in Britain and the likelihood that the citizens of the Republic of Ireland would have to pay higher taxes if it absorbed the northern six counties.

PrevIn Lebanon, Why Not A Sunni Militia?
Oxford Street alert: Police stand down after reports of shots firedNext