A British national who was a member of the Islamic State terrorist group and convicted for his role in taking roughly two dozen Westerners captive a decade ago, resulting in the deaths of four Americans, was sentenced Friday to life in prison.

El Shafee Elsheikh, one of the notorious “Beatles” — a nickname for four Islamic State captors known for their accents and their cruelty — was found guilty in April on charges related to the deaths of the four American hostages: James Foley, Steven Sotloff, Peter Kassig and Kayla Mueller. All of the hostages, except Mueller, were executed in videotaped beheadings posted online. Mueller was forced into slavery and raped multiple times by Islamic State leader Abu Bakr al-Baghdadi before she was killed.

A federal judge sentenced Elsheikh to a life sentence for each of the eight counts he was convicted of. 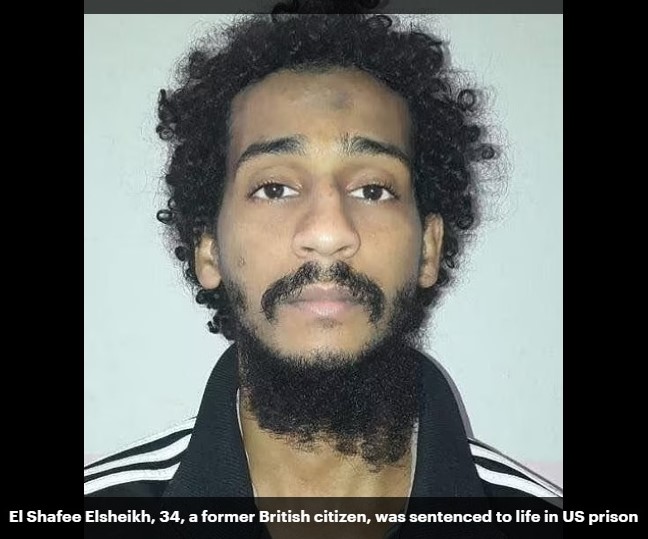 El Shafee Elsheikh, 34, who grew up in London, showed no emotion as judge Thomas Selby Ellis delivered his verdict Friday at the Alexandria District Court in Virginia, while members of his victims’ families watched on.

The coward refused to address the grief-stricken loved ones, who later described him as being ‘cold throughout the trial’ and ‘without remorse’ – believing he ‘still thinks he did the right thing.’

One of Elsheikh’s accomplices, Alexanda Kotey, 38, was jailed in the US in April for his part in the killings. The terror cell also included ringleader Mohammed Emwazi, known as Jihadi John, who was killed in a drone strike in 2015.  Aine Davis was recently released from serving time in a Turkish prison and will be tried in a British court in due course.

Elsheikh’s warped crimes were branded ‘brutal, callous’ and ‘horrific’ today as he was handed a life sentence for each of the eight counts he was convicted of in April, which are due to run concurrently. He is expected to appeal and replace his legal team.

Despite his lawyer’s pleas, he will be shipped to the notorious ADX Florence supermax facility in Colorado, where prisoners are held in isolation for 23 hours a day, and where inmates include Oklahoma bomber Terry L.Nichols and author of the 1993 attack on the World Trade Centre, Ramzi Ahmed Yousef.

Addressing Elsheikh, judge Ellis said: ‘The behaviour of this defendant and his co-defendant can only be described as horrific, barbaric, brutal and callous. This is a significant episode in the history of our country and our justice system.’  Judge Ellis said Elsheikh had not suffered mistreatment while growing up in the UK. ‘He had a decent childhood not marked with brutality,’ he said.

According to the government, as a member of the ISIS ‘Beatles’ Elsheikh was ‘the lifeblood’ of a ‘horrifying and inhumane hostage-taking scheme’ that saw 26 taken and led to the deaths of the four Americans as well as three British hostages and two Japanese.

‘This prosecution unmasked the vicious and sadistic ISIS Beatles,’ said First Assistant US Attorney Raj Parekh, noting that Elsheikh and the other Beatles always wore masks when they appeared in front of their hostages.

Parekh played clips of the interviews given by Elsheikh – interviews that the defense had sought to keep out of evidence.

The court heard Elsheikh boast: ‘I know how to inflict pain to a certain level…I know how to cause real damage…I’ve hit all the prisoners.’

Then they were reminded of the testimony of witnesses who recalled being waterboarded, beaten with electric cables, kicked, given dead legs, placed in stress positions, enduring mock executions, and being psychologically and physically tortured close to breaking point.

It makes the blood run cold to think I passed within yards of some of these ISIS executioners, and friends of mine faced off with them at closer quarters; we knew they were thugs, nasty pieces of work, but the depths of depraved and cold-blooded wickedness they have proved capable of is still a shock. I have no moral objections to the use of capital punishment for such as these.