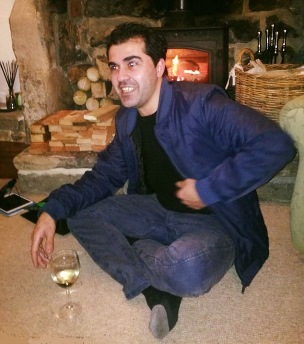 Andy Sami Star, 32, stockpiled 506g of viable low explosive material, fireworks, a wine bottle containing sulphuric acid and fuses in a flat above a chip shop in Sheffield to produce a homemade bomb. He schemed alongside Farhad Salah, 23, to carry out attacks in the near future at an unidentified location.

The pair supported ISIS and sought to harm ‘others that they considered to be infidels’, Sheffield Crown Court heard. But the plot was foiled and police swooped in 6am raids on December 19 last year, a court heard.

Officers forced entry to The Mermaid fish bar in Chesterfield, South Yorkshire and arrested Star, who was wearing only a pair of white sports shorts.

Salah was apprehended by police after being arrested at the Fatima Community Centre in Sheffield where he was living.

A Senior forensic case officer concluded there were several partially constructed explosive devices and a number of already functioning devices at the fish bar where Star worked and lived. A quantity of viable low explosive material and improvised pyrotechnic fuses were also discovered, jurors heard.

‘The prosecution allege that Salah and Star had decided that improvised explosive devices could be made and used in a way here in the UK that spared their own lives preferably but harmed others they considered to be infidels.. . .It is the prosecution case that both Salah and Star supported Islamic State and jointly prepared to commit acts of terrorism on its behalf.’

Officers searched Star’s fish bar and found a small fridge had been placed directly below the ceiling hatch that provided access to a loft, it was said.Over the course of the next few days, officers found cylinders made from plastic and foil, homemade fireworks, lengths of copper piping, a wine bottle containing sulphuric acid. The armed forces were drafted in to carry out controlled explosions in the flat above the fish bar,

Police simultaneously raided Salah’s address and upon arrest told him he was suspected of being involved in the commission, preparation or instigation of an act of terrorism. In the days leading up to his arrest, Salah was in contact with ‘like-minded people’ and sent them a graphic video glorifying the military prowess of Islamic State,

Both men deny preparing to commit acts of terrorism and are standing trial at Sheffield Crown Court.

As I recall from the reports after the initial arrests last Christmas Andy Sami Star was a popular proprietor of the fish and chip shop and seems to have presented as well integrated (although he did give out copies of the Koran, so maybe not) to English society. War is deceit.

PrevUS and Them
Court: Sex assault gang ‘belittled’ and passed around Rotherham schoolgirlsNext