Not just France this week but Germany. Yet another plot. From the Telegraph

A suspected Islamic extremist arrested in Cologne succeeded in making ricin and was planning a “biological weapon attack” in Germany, prosecutors said on Thursday.

Sief Allah Hammami, a 29-year-old Tunisian, was held on Wednesday along with his German wife after police found large quantities of the deadly toxin his apartment.

His 43-year-old wife, named only as Jasmin D, was also arrested on Wednesday but has since been released. She is a convert to Islam and has lived in the apartment since 2012, according to German press reports. The couple live with their four children and claim benefits. Jasmin D is reportedly pregnant. 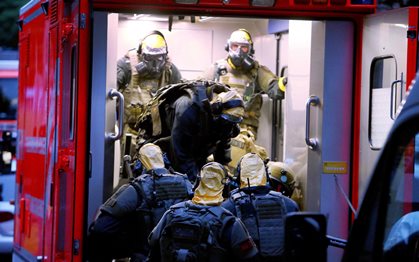 It is believed to be the first time Islamic extremists in Europe have succeeded in manufacturing ricin, which is one of deadliest biological agents known to man.

“This is the biggest potential threat ever found in Europe,” Bild newspaper quoted a source close to the investigation as saying.

The suspect, identified only as Sief Allah H by officials but named as Hammami by the German press, is not a member of a known terrorist organisation. But prosecutors said he “had contacts with people on the jihadist spectrum”.

Islamic extremists are believed to have wanted to manufacture ricin for some time.  “As far as I know, this is the first time we see it made effective, but certainly not the first time we have seen aspiration in this direction,” Raffaello Pantucci?, director of international security studies at the Royal United Services Institute, said.

Authorities in France said last month they had foiled a planned terror attack using ricin after tracking a suspect who was trying to learn how to make the poison online. French police were able to arrest the man, who is of Egyptian origin, before he could manufacture the toxin.

In 2015 a 31-year-old man from Liverpool was jailed for eight years after he attempted to buy ricin on the internet. He had in fact been in contact with an undercover FBI agent.

In 2003 police raided a flat in Wood Green and arrested seven men on suspicion of planning an attack on the London Underground using ricin. It later emerged initial reports ricin was found at the flat were unfounded. One man, Kamel Bourgass, was later sentenced to 17 years for planning to spread ricin in London.

Hammami made ricin in his Cologne apartment using castor bean seeds, which can be easily bought online, and an electronic coffee grinder, according to German prosecutors. The shell of the seeds is highly toxic and can be used to manufacture ricin.

Officials did not comment on German press reports that he used instructions for making a ricin bomb posted online by Islamic State in Iraq and the Levant (Isil).

Nor did they comment on claims he was arrested after a tip-off from the American CIA, after it spotted he was making unusually large orders for castor bean seeds online.