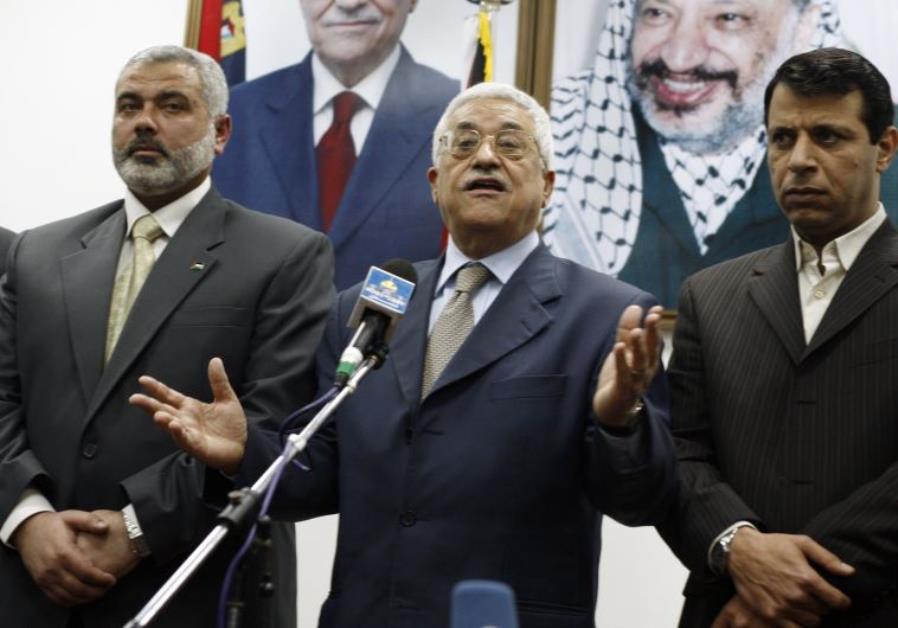 The paths of glory lead but to the grave. Certainly this has been the case with the Palestinian movement, which has been hanging its tears out to dry. The glory of that movement, the PLO, Fatah, Hamas, was to be the destruction of the State of Israel. To take one formulation, the Charter of Hamas, IRM, (Islamic Resistance Movement), states that “our struggle against the Jews is very great and very serious.” Its preamble declares that Israel will exist and will continue to exist until Islam will obliterate it, just as it obliterated others before it. There is, it asserts, no solution for the Palestinian people except by Jihad. So called peaceful resolutions are in contradiction to the principles of the IRM. Its neo-peaceful resolution has been instigating three wars, countless rocket and missile attacks, building aggressive tunnels from which to infiltrate Israel, using flaming balloons and kites to set fire to thousands of hectares of Israeli forests, and burning of tires.

Hope for glory has become displacement of Palestinians, poverty, wars, intifadas, humiliation, Nakba, (catastophe) and lack of development. The glory of Hamas, ruler of the Gaza Strip, has not been been one of political and economic development, but creation of a base from which to attack the State of Israel and its citizens. It comes as no surprise that the neglect by Hamas of the welfare of the inhabitants of Gaza has resulted in the area lacking in gas supply, water desalination and electricity infrastructure.

Unemployment in the Gaza Strip is 44%. Hamas is largely dependent on UNRWA for 252 schools, with 240,000 pupils, and health clinics.

The U.S. has been by far the largest donor to UNRWA, giving $150 million for its regular budget, compared with wealthy Qatar which gives $1 million. President Donald Trump has decided to reduce the U.S. contribution in 2018. The Trump administration indeed questions the validity of UNRWA. Created in December 1949 to deal with the welfare of Palestinian refugees, the organization has perpetuated the refugee problem rather than help solve it. It is dealing with only a small number of  genuine refugees, and with five million of second and third generations of descendents who left or were evicted from their homes after the wars provoked and launched by Arab armies against Israel.

Those who swallow the “fake news”, disingenous misinfotmation, that Israel is a land of Jewish exclusivism and an “apartheid ” and colonial state that denies the full and equal rights of many of its citizens must be perplexed by recent real news. Those perplexed already could not comprehand why Omar Barghouti, founder first of the Palestinian and then the general campaign to boycott Israel, BDS, defied the acdemic boycott and remained a student at Tel Aviv University, obtaining a MA in philosophy and being a candidate for a PhD degree.

Now the bigots of BDS must be disoriented by the news that in July 2018 an Arab-Israeli woman, Mona Khoury-Kassabri, was appointed dean of the School of Social Work, at Hebrew University in Jerusalem. A Christian Arab woman, born of illiterate parents, whose research is about youth violence, she is the first Arab woman to be appointed a dean at the university. Yet she is only one of the Arab-Israelis who have and are occupying high official positions in Israel. In 1999 Abdel Rahman Zuabi was appointed to the Israeli Supreme Court, and in May 2004  Salim Joubran was similarly appointed a justice. Even so, in March 2012  Joubran, in discourteous behavior that would have infuriated President Donald Trump in his attitude towards the Dallas Cowboys, refused to sing the national anthem at the ceremony for the inauguration of the president of the Supreme Court.

Despite the facts, the Palestinians and the bigots of BDS, in their implicit goal of eliminating the State of Israel, still depict Israel as a colonial and apartheid state. “Apartheid” is a term officially adopted by the UN General Assembly in 1973, and defined again in 2002. In that year, the Rome Statute of the International Criminal Court defined apartheid as encompassing inhumane acts such as torture, murder, forcible transfer, persecution of an identifiable group on political, racial, national, ethnic, cultural, religious grounds. The Statute condemns acts of systematic oppression and domination by one racial group over any other group.

Even the most bigoted boycotter will find it difficult to see the appointment of Mona Khoury-Kassabri as an example of any of those unhumane acts. There are no Bantustans, of South African kind, in Israel. Unlike many Middle East countries, Arab-Israeli  women have always been able to vote in elections and participate in political activity. Sanity is required to address the never ending fake news. The existence of Temple Mount in Jerusalem and the archaelogical digs near it do not constitute a threat to the existence of the Al-Aqsa mosque, nor an exhibiton of colonialism. Nor does the accidental dislodging in July 2018 of a large stone from the Western Wall imply a secret attempt by Jew to build a third Mount Moriah.

Nor does the fact that Israel has been medically treating wounted Syrian soldiers and civilians in the Golan Heights and admitting them into Israeli hospitals suggest acts of racial superiority.

Israel is founded on Zionism, a national but not colonial, movement, based on the historic Jewish connection with the land. The concept of “colonialism” is more appropriate to the empires since the 15th century  set up by the powers, Spain, Portugal, Britain, Sweden, France, Russia, Holland, Belgium, Germany, and Ottoman. In all cases there were outstanding crimes, massacres, violence, and subjugation of a population to a foreign political, economic, cultural order.

However, controversy surrounds the Nationality Law  passed 62-55 with 2 abstentions by the Israeli Knesset on July 19, 2018. It states that Israel is the historic homeland of the Jewish nation, that the State of Israel is the nation state of the Jewish nation, in which it realizes its natural, cultural, religious, and historical right to national self-determination. The Law declares Hebrew is the national language. Arabic, from being a national language, is explained as having a special status, and the use of the Arabic language will be required in government offices.  The Law, rejecting the allegation that Israeli is a “settler-colonial” state, sees Jewish settlement as a national value.

Though the Law has been criticized as anti-democratic and one that may allow discrimination, it does not infringe on the rights of all as equal citizens of the State of Israel. Indeed, the stress on Hebrew as the official language is similar to that in the French Constitution where article 2 declares that the language of the Republic is French.  Moreover, every road sign in Israel is in both Hebrew and Arabic.

The Law in fact is largely symbolic, arising from the problem that Israel does not have a written constitution. The nature of the system and the existence and maintain of equal rights has to determined from the Basic Laws. The Nationality Law is now one of them. It states the name of the country, Israel, the Star of David on the flag, the  menorah as the state emblem, Hatikvah as the state anthem, and Jerusalem as the capital. The Jewish national movement has expressed iself in clear fashion.