It begins with eggs, then it is firebombs 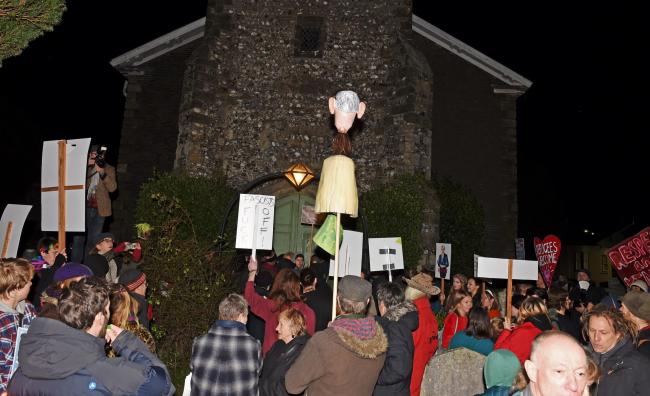 Not many literary festivals end in violence, but the Lewes Speakers’ Festival last weekend did so. About 100 protesters tried to prevent Katie Hopkins, the Daily Mail columnist, from speaking there about her autobiographical book, Rude, and succeeded. She left when the police said that they could no longer guarantee her safety.

I spoke immediately before Katie Hopkins, who, guarded by a close protection squad, was scheduled to appear (she was the last speaker of the day). The banging on the windows and chanting began just as I was ending. Two or three protestors wearing motor cycle helmets and masks broke into the hall with a crowbar and a member of the audience hit one of them over the head with the leg of a chair. Then the eggs started flying. One of the policemen looked as if he were about to be scrambled. Despite the assaults on the police no charges are contemplated.

My wife and I were advised by the police not to leave the hall as we had planned. Along with perhaps forty other people we were in effect imprisoned by the demonstrators. A couple of the women were genuinely very frightened and one was in tears because she had been separated from her husband and did not know where he was and whether he was safe. In the end, we were escorted through a back entrance by the police and led in the dark through a graveyard.

Katie Hopkins is said to be an apostle of hate, but the faces of the demonstrators were hardly those of universal love, to put it very mildly. According to the reports of eye-witnesses, some of the demonstrators handed out eggs to their children for them to throw at the police. This, presumably, was because the children could not very well be arrested for assaulting the police in this fashion.

Apart from being cowardly (in the true and not in the false sense of the word often used about suicide bombers), to allow children to witness such scenes as occurred, or rather as were committed, in Lewes was surely a form of abuse. Were there any social workers on hand to protect the nippers from their abusive parents? The question answers itself. It is more likely that there were social workers among the demonstrators handing out eggs to children to throw.

I can’t say that I was frightened personally, for I have been in far worse situations. And yet I thought that I caught in this little episode a distant glimpse of a possible future dictatorship or even civil war in this country.