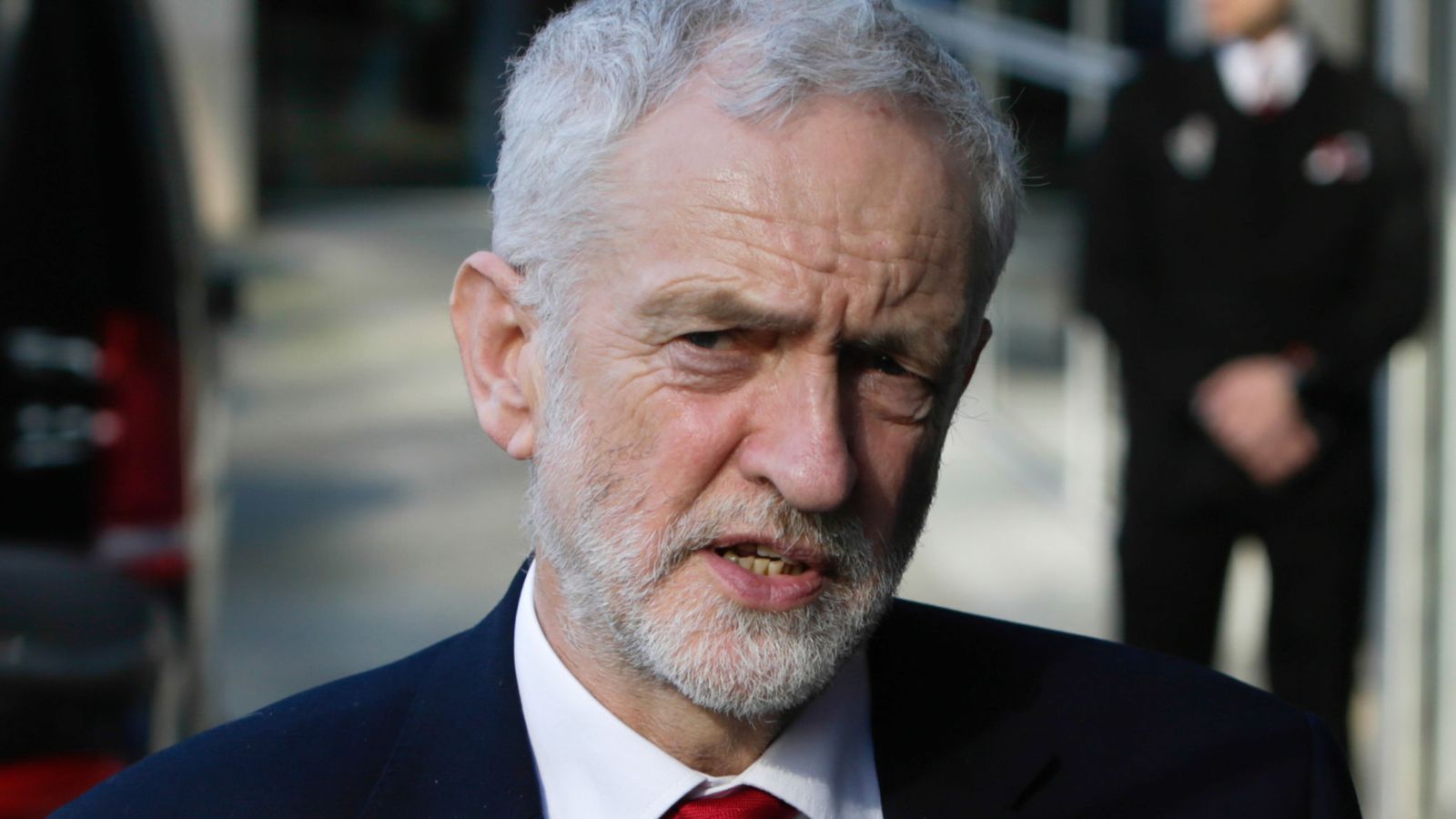 An evening with Mrs. Merkel, Mrs. May, or President Macron would, I suspect, be about as entertaining as dentistry without anaesthetic; but it would be like an evening with Oscar Wilde by comparison with an evening with Jeremy Corbyn, the leader of the Opposition in Britain, who is possibly, though not certainly, the country’s next Prime Minister.

In normal circumstances, no one would dream of writing a biography of so dreary a man as Jeremy Corbyn; but political correctness has so eviscerated the exercise of wit that dreariness is no obstacle to political advancement and may even be of advantage to it. The dreary, alas, are inheriting the earth.

Tom Bower is a biographer of eminent living persons whose books tend to emphasise the discreditable—of which he usually finds more than enough to satisfy most people’s taste for salacity. His books are not well-written but they are readable; one sometimes dislikes oneself for enjoying them. So Bower’s latest book Dangerous Hero: Corbyn’s Ruthless Plot for Power, is a bit of a surprise.

Jeremy Corbyn is not a natural subject for Bower because he, Corbyn, is not at all flamboyant and has even managed to make his private life, which has been far from straightforward, uninteresting. Corbyn, indeed, could make murder dull; his voice is flat and his diction poor, he possesses no eloquence, he dresses badly, he has no wit or even humour, he cannot think on his feet, and in general has negative charisma. His main assets are his tolerable good looks, attractiveness to women, and an ability to hold his temper, though he seems to be growing somewhat more irritable with age.

Bower has written a book that is very much a case for the prosecution. If he has discovered in Corbyn no great propensity to vice as it is normally understood, neither has he discovered any great propensity to virtue as it is normally understood, for example personal kindness. His concern for others has a strongly, even chillingly abstract or ideological flavour to it; he is the Mrs. Jellyby de nos jours, but with the granite hardness of the ideologue added to Mrs. Jellyby’s insouciance and incompetence.

Corbyn’s own account of the break-up of his second marriage is telling. According to him, he and his wife quarrelled and split up over where to send one of their sons to school. Mrs. Corbyn, the daughter of Chilean exiles, wanted to send him to an excellent but selective school a little way away, while Mr. Corbyn, who opposes selective education on principle, wanted to send him to the nearest school which, it so happened, had one of the worst academic records in the country. Mrs. Corbyn, with her three children, left him as a consequence, saying that the education of her son came first.

Bower disputes this account. According to him, it was Mr. Corbyn’s joyless attitude to life, his neglect of his wife in favour of political meetings, and his hopeless, Jellyby-like financial incompetence that meant that they could not live in decent comfort that wrecked the marriage. Whatever the truth of the matter, the significant thing is that Mr. Corbyn wanted and still wants everyone to believe that his marriage broke up because of a willingness to sacrifice his son’s education and future, thereby exposing him to the distinct possibility of failure for the rest of his life, in the name of his principles.

It is true, of course, that if he had agreed to send his son to a selective school he would have been accused of hypocrisy; but with a little mental flexibility, a quality which he has singularly lacked all his life, he could have answered the accusation. He could have said, “I favour non-selective education, but in the present circumstances, which it is my vocation to change, I am regrettably obliged for my son’s sake to send him to a selective school.” But this rather obvious reply was beyond the range of his capabilities; for him, goodness consists solely of sticking rigidly to some abstract principle or other, no matter the cost to others, up to and including his own son. It is enough to send shivers down your spine.

His probity, cruelty or stupidity, might appeal to monomaniacs, but it presages terrible suffering for millions if ever he were to achieve real power: for no merely empirical evidence, no quantity of suffering, would ever be able to persuade him that a policy was wrong or misguided if it were in accord with his abstract principle. This explains his continued loyalty to the memory of Hugo Chavez and to his successor. What happens to Venezuelans in practice is of no interest to him whatsoever, any more than the fate of Mrs. Jellyby’s children were of no interest to her. For Corbyn, the purity of his ideals are all-in-all and their consequences of no consequence.

From a relatively privileged background, he formed his opinions early and has never allowed any personal experience or historical reading to affect them. On any case, according to Bower, he reads not at all: in this respect, he is a kind of Trump of the left. He has remained what he was from an early age, a late 1960s and 70s student radical of the third rank.

His outlook on life is narrow, joyless and dreary. He is the kind of man who looks at beauty and sees injustice. He has no interests other than politics: not in art, literature, science, music, the theatre, cinema—not even in food or drink. For him, indeed, food is but fuel: the fuel necessary to keep him going while he endlessly attends Cuban, Venezuelan, or Palestinian solidarity meetings. He is one of those who thinks that, because he is virtuous, there shall be no more cakes and ale.

Corbyn hates his country and has never been heard to utter a complimentary word about it. He despises any tradition that has not emanated from the working class, preferably in the days of its destitution. He wants to dissolve the armed forces. He believes that man is born rich but everywhere is poor, so that it is poverty and not wealth that needs the greater explanation. He has been heard to say that it is welfare that makes a country prosperous, without any concomitant recognition that wealth has to be created, and wants unlimited immigration with the automatic right of immigrants to unlimited welfare whatever the numbers involved, because, as he says with a kind of refrigerated sentimentality, “the needs of women and children come first,” as if life were nothing but a prolonged exercise of abandoning ship; and secondly as restitution for the past wrongs of colonialism.

I do not think there is any doubt that he is antisemitic, though he is just fly enough not to make too many overtly or unequivocally antisemitic remarks. He is cunning though not intelligent and is careful not to say or do anything that is impossible to interpret other than by the attribution to him of antisemitism. Cumulatively, however, the evidence is strong if not quite forensically overwhelming: his consorting with Holocaust-deniers, his fondness for Hamas and Hezbollah, his membership of a private antisemitic Facebook page, his tolerance of the grossest antisemitic insults of Jewish members of the Labour Party, his near-obsession with the Palestinian question which far exceeds his interest in any other foreign policy matter, his failure to recognise a mural painted in the East End of London (in a borough more than a third of whose population is Muslim) as antisemitic though it could have come straight out of the pages of Der Sturmer, all point in the same direction. The only group he has ever implied were alien to Britain were “British Zionists,” whom he accused of lacking an English sense of irony, even though they had probably, as he put it, lived in the country all their lives. He has never said that the Muslim bombers of the Manchester Arena lacked an English sense of irony. His own sense of irony is not very marked: he is about as funny as Walter Ulbricht.

There are two good reasons why he should be antisemitic. The first is electoral: there are ten times as many Muslims in Britain as Jews, and the latter are electorally important in one or to constituencies. By contrast, Muslims, who are highly concentrated in certain areas, are important in 30 constituencies, and their vote could therefore easily swing an election. Antisemitism will play well with them.

More importantly, antisemitism accords well with Corbyn’s conception of the world. He believes that capitalist society is not merely imperfect, in need of reform, but so unjust that it needs abolition and replacement. It is an unjust social order, in which the privileged rule unjustly and hoard wealth which rightfully belongs to others. They must be expropriated.

Now the history of the Jews in this country proves that this conception of British society (and many other societies) is complete rubbish. It took one generation, two at most, for Jews to go from poverty to prosperity—the same is true of the Sikhs, incidentally. For Corbyn, this is not proof of the openness of British society, but of conspiracy and illicit influence, for only conspiracy can explain success in the fundamentally unjust, closed society of his Weltanschauung. His is the kind of mind to take the reasoning of The Protocols of the Elders of Zion seriously, albeit in somewhat less virulent and more sophisticated form. For him, differences of outcome among groups, whether advantageous or disadvantageous, can arise only from injustice, which it has been his duty since the age of 17 to right.

The question arises as to why so fundamentally dismal a man should have become so popular. The main reason is that he promises six impossible things before breakfast to people who think they will not have to pay for them, and such people can always be found because discontent springs eternal.

Bower’s unflattering portrait of Corbyn as a Lenin without the intelligence is not referenced but it has been lawyered. This does not mean that everything in it is true, for there is enough that is both true and damning that Mr. Corbyn would not want aired in court. The biography of a man who has spent most of his life at solidarity meetings, and in factional intrigue and distributing pamphlets, is somewhat dispiriting to read. But Mr. Corbyn is a fine example of that peculiar modern type, the man who is bad, uninteresting and important, for whom lack of scruple is probity. Mass emigration, as well as immigration, is but an election result away.

PrevThe Boldness of Bahrain
Stick a Fork in O’RourkeNext