Suspected Islamist militants who have wreaked havoc in northern Mozambique for more than two years went on a rampage attacking several villages over a 24-hour period, police and local authorities said on Tuesday.

The latest series of attacks were staged between Monday afternoon through Tuesday morning and left hospitals, schools, a bank and construction equipment destroyed and ransacked.

Police sources told AFP that militants on Monday attacked two villages in the districts of Muidumbe and Quissanga, located some 150 kilometres (90 miles) apart. In Muidumbe they “set fire to shipyards, trucks and bulldozers” belonging to a bridge construction firm, said one police source.

Before the raid, the attackers used loudhailers to warn villagers “not to run away but stay inside the house,” the source said.

On Monday night the militants set houses on fire in the Bilibilza village, about 60 kilometres from the provincial capital Pemba.

On Tuesday morning, the insurgents staged another attack in Muidumbe district. “They destroyed the hospital and looted medical drugs. They also attacked the local (bank) and blew up an ATM and looted bank notes which they distributed themselves,” said a local police officer. “Then they raised their flag at the local hospital,” said the source.

On March 23 to 24, the centre of Mocimboa da Praia in Cabo Delgado province was occupied by up to 40 “jihadists”, who targeted government facilities, including a barracks, and brandished banners of affiliation to the so-called Islamic State.

On March 25, suspected jihadists raided the town of Quissanga and destroyed the district police headquarters. They too carried an Islamic State flag. Twenty to 30 members of Mozambique’s security forces were killed in both attacks.

Mocimboa da Praia is just south of the Afungi Peninsula, the location of gas projects worth $60- billion.

Up to 1,000 people have now been killed and 100,000 displaced. More recently, The Islamic State Central Africa Province (Iscap), affiliated with the Islamic State group, has claimed responsibility for the attacks. Video and photos of these most recent events, along with the testimony of frightened residents and overstretched government officials, suggest a shift of strategy by the insurgents.

There seems to have been an effort to avoid harming civilians, to win hearts and minds by redistributing stolen food, medicine and fuel to “loyal” residents, and to direct attacks on the state and its symbols, such as police stations and military barracks.

These attacks also indicate that the jihadist-linked insurgents are growing in confidence. They are confronting government security forces with little appetite for fighting. . . Jihadists are also taking tactical advantage before a reformed and more effective government counterinsurgency effort is introduced in response. 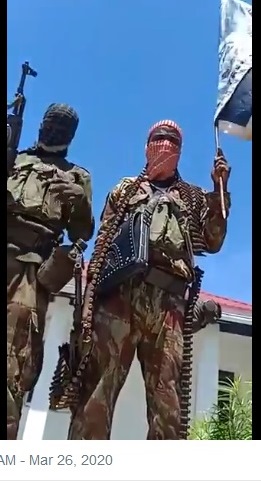 An alleged Islamic State jihadist said that the aim of this week’s two attacks by armed insurgents on towns near a planned liquefaction complex in northern Mozambique is to impose Sharia law in the region. Portuguese news agency Lusa said the message — delivered on video — is the first ever to be issued by perpetrators of multiple attacks that have taken place in Cabo Delgado province since October 2017.

In the video, a man in military uniform with his face covered appeals, in Portuguese, to fighters under the flag of the extremist Islamic State group. Twitter link to the video here from Eric Morier-Genoud, Senior Lecturer in African and Imperial History at Queen’s University Belfast.

“We are calling on [those who see the message] to come here and fight under this flag … we do not want the Frelimo flag,” he said, in a direct appeal for support for the application of Islamic law in the remote province and its surrounds.

Frelimo, headed by President Felipe Nyusi, has been Mozambique’s ruling party since independence.

Lusa quoted the man as saying “we are not fighting over (the) wealth of the world”.

The recording was identified by Lusa as being made in broad daylight on the wall of the residence of the administrator of Quissanga, a village in the province of Cabo Delgado invaded on Wednesday and from which the entire population fled.

Two analysts linked to security companies who follow the armed violence in Cabo Delgado told Lusa to accept the recording as legitimate, in line with the photographs released on Wednesday by the armed group near the village buildings.