Kabul hospital attack: They came to kill the mothers

In the days following the attack on Dasht-e-Barchi hospital in Kabul, Afghanistan, it has become clear that what happened on 12 May was a deliberate assault on a maternity hospital with the purpose of killing mothers in cold blood.

“I went back in the day after the attack and what I saw in the maternity demonstrates it was a systematic shooting of the mothers,” says Frederic Bonnot, MSF’s head of programmes in Afghanistan. “They went through the rooms in the maternity, shooting women in their beds. It was methodical. Walls sprayed with bullets, blood on the floors in the rooms, vehicles burnt out and windows shot through.”

Official numbers indicate that 24 people were killed and at least 20 more injured. Most of the victims were patients.

MSF has been supporting the facility for the past six years and can confirm that 26 mothers were admitted in the hospital at the time of the attack. . . 10 of them managed to find shelter in safe rooms … 11 were killed, three of them in the delivery room with their unborn babies, and five others were injured.

Among the dead are two young boys and an Afghan midwife with MSF. Two newborn babies were wounded, one of whom was transferred to another hospital for emergency surgery after being shot in the leg, as well as three local MSF staff.

The attackers, whose overall number is as yet unknown, stormed the hospital through the main gate just after 10 am.

There were other buildings and wards closer to the entrance, but according to MSF staff present at the moment of the attack, the assailants moved straight to the maternity ward supported by MSF.

“It’s shocking. We know this area has suffered attacks in the past but no one could believe they would attack a maternity clinic. They came to kill the mothers. . . .This country is sadly used to seeing horrific events,” says Frederic. “But what happened on Tuesday is beyond words.” 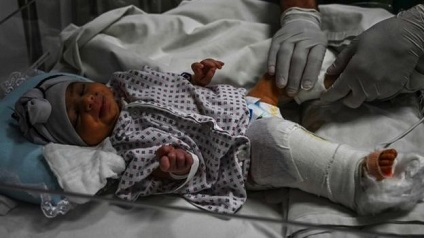 Amina was just two hours old when the attack started. The little girl was the third child for Bibi Nazia and her husband, Rafiullah. Back at home, they already had a girl and a boy. Nazia had gone to the hospital with her mother, and Amina was born at 08:00.

A total of 26 mothers and mothers-to-be were inside at the time. Ten managed to flee to safe rooms; the other 16 – including Bibi Nazia and Amina – were not so lucky. Bibi Nazia was among the other eight mothers killed; little Amina was shot in the legs.

…grandmother who had to pick up her fatally-injured new-born grandson from the floor,

One woman, named only as Khadija, told Reuters news agency how one of the gunmen had pointed his weapon at her, before turning it on two other people.

One baby born was at the hospital during those hours. A midwife, speaking on condition of anonymity, revealed to the AFP news agency how the woman sheltering with her in the safe room gave birth while trying not to make a sound.

“We helped her with our bare hands, we had nothing else in the room except some toilet paper and our scarves,” the midwife said. “When the baby was born, we cut the umbilical cord using our hands. We used our headscarves to wrap the baby and the mother.”

The babies were moved to the Ataturk hospital in Kabul, the families who had gathered outside the maternity unit following – desperately waiting to see if their child’s name was called.  Little Amina is now recovering in a different hospital. She has already had one round of surgery, with at least two more to go. The doctors hope they can save the leg shattered by a bullet, but they don’t know yet. The family fear for her future if they do have to amputate – life is not likely to be easy for a disabled girl in Afghanistan.

No group has said it carried out the maternity hospital massacre. The Taliban claimed the Gardez city blast, while the Islamic State (IS) group took responsibility for the funeral attack