Kerala: Muslim group says sorry for allowing a woman inside mosque for her own wedding, says no more brides in mosques in future

Days after an Islamic bride was allowed to enter a mosque for her marriage ceremony in Kozhikode, Kerala, the Paleri-Parakkadavu Mahal Committee announced on Friday that allowing the bride into the Mosque for marriage is not acceptable. The committee said that bride was allowed inside the Mosque by mistake and that no such conduct in the future will be tolerated.

The Parakkadav Juma Masjid in Kozhikode had permitted Kuttyadi native KS Umeer to get his daughter wedded on the premises around the Mosque. Umeer’s daughter Bahja Dalila got married to Fahad Qasim on July 30 after which the bride’s family asked the general secretary of the Mosque to allow Dalila inside the Mosque.

“Permission had been given for marriage outside the mosque. However, one of the office-bearers mistook it as the nod for the bride to be present inside the mosque. The person concerned has apologized for the mistake”, the committee was quoted.

Holding the bride’s family responsible for the incident that took place after the wedding, the committee said that it would meet the concerned family to express displeasure over the incident. 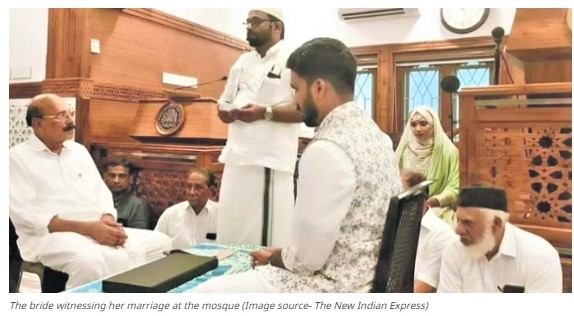 Abdul Hameed Faizy, working secretary of Sunni Yuvajana Sangham (SYS), described it as a new aberration in Islam, which was established by Jama’at-e-Islami and Mujahids.

the groom’s uncle …said…“We thought that allowing bride inside the Mosque was leading to progress in the community. We had taken every permission before the function. It would be great if the committee rethinks its decision and starts adopting meaningful changes that bring good to society”,

According to Islamic belief, women are generally not allowed to enter mosques. (I know other countries do allow a women’s section)  Meanwhile, KS Umeer, the father of the bride, said that both the families wanted daughter Dalila to witness her marriage at the Mosque. “Bahaja’s wedding became the first ceremony in our locality, where the bride was able to witness the ceremony inside the Mosque. It is high time that we discarded such practices that have no place in Islam. The brides, including my daughter, have the right to witness their wedding”,

I’d say they have the right to not just witness their wedding, but take the central role in them, next to their groom.

I, Bahja Dalila, take you, Fahad Qasim, to be my lawful wedded husband, or words to that effect…