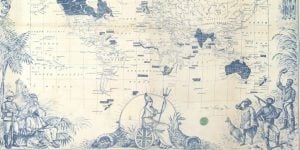 There are two ends of a telescope down which to look, the one perhaps more illuminating than the other. In The King’s Peace, the historian Lisa Ford examines the question of law and order in several territories of the British Empire from the last half of the eighteenth to the first third of the nineteenth century. She is mostly appalled by what she finds, justifiably so from our present standpoint. But she does not stop to wonder how or why the rule of law developed, no doubt imperfectly, in the territories from which she derives her evidence—the United States, Canada, Jamaica, India, and Australia. Was it just a coincidence? It is as if she believed the rule of law were the natural state of society from which deviations had to be explained. She might have considered whether the possibility that the rule of law is an exception rather than the rule in human history.

She takes individual cases from the various territories to illustrate what she has to say. Though she does not seem to be a natural storyteller, the stories themselves are very interesting. For example, in 1764 a group of soldiers in Montreal broke into the house of Thomas Walker, a magistrate, and cut off his ear. This was symptomatic of the conflict between the 300 English merchants of the town (population then between eight and nine thousand) and the military government established after the conquest of Quebec during the Seven Years’ War.

The English merchants, a tiny minority, wanted Quebec to be self-governing in a way similar to that of the Thirteen Colonies. This, in effect, meant that the merchants wanted to rule over the French who were numerically preponderant in the province, since it was inconceivable to them that Protestants and Catholics, English and French, should have the same political, social, and economic rights after the conquest.

The military government was more circumspect. It did not want to create another Ireland, in which a small Protestant minority lorded it over a despised, impoverished, and resentful peasantry. It therefore largely preserved French law and local custom and refused representative self-government to the merchants. The British Army thus sided with the French population against the English merchants in order to preserve peace, but at the cost of establishing military rule, which the merchants resented and did their best to overturn. Hence the loss of Mr. Walker’s ear at the hands, or rather the swords, of some soldiers.

In Jamaica it was different. There, the class that was equivalent to the English merchants of Quebec was the planters, racially a tiny minority. The planters were happy to forgo representative government because they needed military protection constantly, so terrible were the conditions of the slaves who, but for the presence of the military, might easily have risen up and slaughtered their masters. The only way to keep order in such a society was by the utmost terror and cruelty, though the planters came under increasingly unfavourable scrutiny in the metropolis. The need to avoid a second Haiti, however, where the slaves eventually emancipated themselves from the French (though not with particularly happy results), limited the effect of the home country’s philanthropic concern. The most arbitrary exactions continued.

Professor Ford then turns to Bengal, where the precise legal underpinning of British rule, through the intermediation of the East India Company, was unclear and remained unclear until 1857, when sovereignty was fully transferred to the British government. At any rate, the government of Bengal was faced with the problem of dacoity, that is to say, bands of armed robbers whose depredations were great and growing.

There was division in the ranks of the British, with some believing in the necessity of a version of due process and others believing that no scrupulous system of law and order could deal adequately with this problem. The latter prevailed, as did their system of espionage, denunciation, torture, and arbitrary arrest and imprisonment without trial on the slightest suspicion. This all conduced to terrible corruption as well as to the breakdown of the pre-existing social hierarchy, insofar as the spies and policemen were usually of low caste who now had considerable powers of intimidation over the moneyed and those of higher caste. Resentment was the natural result.

However, the system probably did reduce the prevalence of dacoity, and those in favour of it argued that the end justified the means. Whether governments are ever justified in abrogating the most elementary tenets of the rule of law for utilitarian reasons, or whether there is a deontological requirement for it never to do so, is a question that is still not perfectly settled, in practice if not in theory.

In some limited respects, the Aborigines had it easier. Because Australia had been occupied rather than conquered, and because the Aborigine societies had not formed themselves into states, Aborigines were regarded neither as citizens nor as wards of the colony. This meant that, if they committed crimes against each other, up to and including murder, they could not be tried in colonial courts. Only much later did they become citizens to the extent that they were punishable if they broke the law. Before that, they could settle things among themselves, supposedly according to their traditions and customs. The author’s native Australia is another interesting example. New South Wales began as a convict colony, where unfree labourers long outnumbered the free variety. Naturally, this created great tensions, for there was the temptation for the masters of unfree labour to abuse it, which in turn created a permanent threat of rebellion. This could only be met manu militari, though the maintenance of order was very difficult even with soldiery, the territory being immense and the population sparse. Hence the need (at least, the argued need) for a very severe system of supervision, such that anybody at any time could be asked to prove that he had a right to be where he was. A man who could not prove that he was not a convict was assumed to be one, and then treated as such—the onus being on the interrogated to prove that he was, in effect, innocent. This, of course, was completely against the most fundamental tenet of British criminal law, namely that an accused was innocent until proven guilty. But once again the argument was used that the end justified the means, and that the situation was such that there was no real alternative: at least, no alternative while New South Wales remained a convict colony.

There was a price to pay for this relative freedom, of course. The land being so vast and the resources to police it being so limited, the government set land boundaries beyond which it said that its writ did not run. This being the case, those who lived beyond the proclaimed boundaries were beyond the reach of law, and the Aborigines did not enjoy even the limited protection that the colony provided.

To this day, the status of Aborigines in Australia is a fraught question. Are they a people apart, or are they full citizens of the country indistinguishable from anyone else? Should they have special privileges, or are they simply to be treated as equal under the law? It is probably true to say that every possible permutation of policy has been tried, whether motivated by racist disdain or true philanthropy, but none has been found that is a perfect solution. The Aborigines were never a nation with whom the newly forming state could treat; and in addition, they are now themselves divided into many different ways of life, only their original nomadism having disappeared.

Ford’s book raises important questions of legal and political philosophy. Are there universal principles of law that should underly government always and everywhere, or do circumstances alter cases? It is true, of course, that some of the polities that the author discusses should never have existed. Dr. Johnson, for instance, was against the European colonisation of the world because Europeans unjustifiably usurped the rightful ownership of the land by the native populations and deprived them of their political rights into the bargain.

Humanity is always starting out from where it is rather than where it would have been had it behaved better in the past. We always start out from where we are, and the fact is that the polities existed and therefore had to be ruled as well as possible. Would it have been practicable to rule New South Wales as if it were Jane Austen’s Hampshire, and would not the attempt to do so, if it had ever been made, have been both absurd and dangerous? We can say that there should never have been a convict colony in New South Wales, but once it was established, how was it to be ruled? And though Ford never appears to notice it, the irony is that, its original defects notwithstanding, Australia developed within a few decades into one of the best countries in the world in which to live, to which millions would have liked to emigrate. The same is true of Canada. How did this come about? Was it a coincidence that had nothing whatever to do with the colonial foundations? The author does not even consider the question.