Lee Rigby tribute – one week on…

Readers may remember that I reported a week ago about the gathering in Woolwich to replace tributes to Fusilier Lee Rigby, the British soldier murdered by jihadists on the streets of London in 2013. We left the area looking like this

All was good until Wednesday morning when a Greenwich council worker  (there may have been more than one) was spotted removing the flags and banners from the railings round the block of flats in Wellington Road, at the spot where he died.  My husband was in the area early on Thursday morning and photographed the site thus 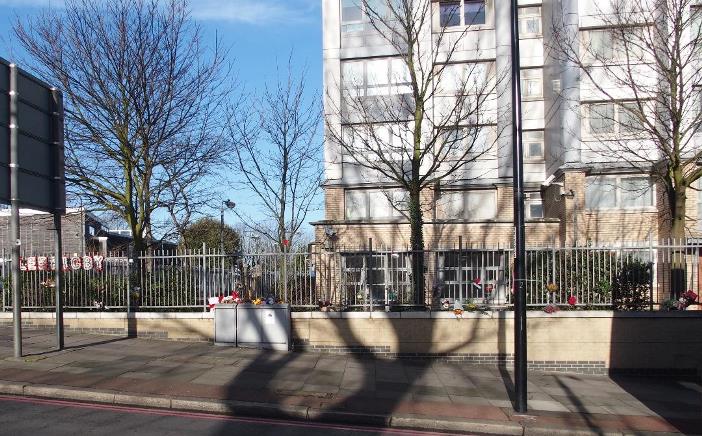 Everything except the flowers removed. To give credit where due the flowers were neatly relaid either on the wall or the junction box. However the mostly local people who would like a better memorial to Lee Rigby in or around the area where he worked (Woolwich Barracks) and died were not happy. The council worker who removed the flags was recognised and angry feelings were vented. The BBC went so far as to report

A council worker has received death threats for taking down a memorial in tribute to murdered soldier Lee Rigby.

There are two errors to my knowledge in that BBC report. I’ll call them ‘errors’ rather than lies because of something I will write about later, or maybe tomorrow.

The first is this statement “Greenwich Council said it removed the shrine following requests from Mr Rigby’s family.”

Originally in the local press the council said that they were taking the flags down, and that they had informed the family “who had made no objection”. Thats not the same thing at all. Local women who are part of the group calling for a memorial are in touch with Mrs Rigby. The menfolk keep the flags up to date and replaced should they tear. I do not know how the information was conveyed to Mrs Rigby but I doubt that she would object to removal and replacement of flags showing wear.

The second is this one “”The council has worked with his [Lee Rigby’s] family on how best to honour his memory and decided to install a plaque at St George’s Garrison Church opposite the barracks.”

This statement has been repeated in the news a lot. It sounds like a specific memorial, the sort of thing local people have been wanting. It isn’t. It’s a general tribute, an excellent memorial of its type, to service personel and civilians who have lived or served in Woolwich who have sacrificed their lives. Although it was put up in 2015 the list of names goes back to 1946, includes men who fell in the Korean War and the two men, one a soldier the other a bank clerk, who were killed in 1974 when the IRA bombed the pub on the corner of Wellington Road. Lee Rigby is the most recent; there is space for 3-4 more names before a third bronze tablet will be needed. I hope it never is but I expect it will be.

Which leaves me pondering how much danger the council caretaker was in. In this  day and age when trades unions are more concerned with extracurricular activities than their member’s job security he would have had little option but to carry out a senior 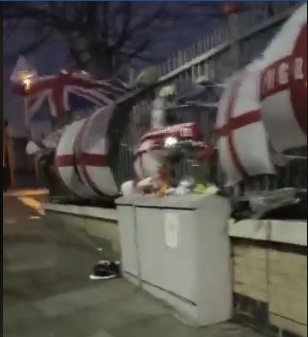 official’s order. The reaction that I heard was in our working class vernacular “I’d wring his blooming neck if I got hold of him…” but nothing to inspire real fear. If more sinister  and genuine threats were actually made then I cannot condone them. But all I heard was exasperation, and the other inaccuracies of that BBC report leave me unconvinced that he was in any danger.

More people went along on Thursday afternoon, Friday and Saturday with more flags. By Saturday evening it looked like this – above left. 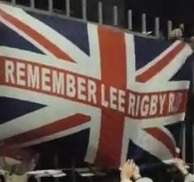 There is a petition which can be signed here,  and a deputation will be attending the Town Hall on Wednesday evening to repeat the request. The interim good news is that Greenwich Council have announced that they will not order the removal of the current display of flags.