Leeds, Yorkshire: School under siege after head hits out at Palestinian flag:

From the Telegraph, and the Daily Mail 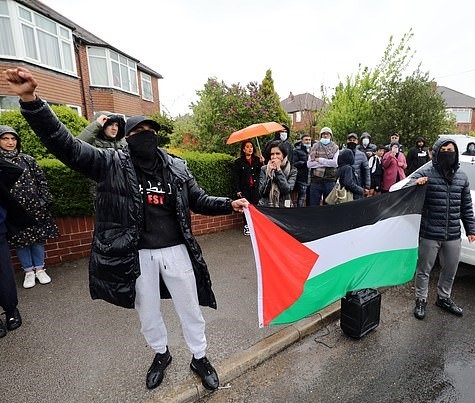 Police were stationed outside a school (Allerton Grange in Leeds) on Monday as it faced a “barrage” of criticism after the headteacher described the Palestinian flag as a “call to arms”. A group of around twenty pro-Palestinian activists chanted, played music and waved Palestinian flags outside the secondary school on Monday afternoon and branded the comments “inflammatory”.

There are understood to have been tensions at the Yorkshire school last week after some pupils reportedly had lanyards bearing the Palestinian flag confiscated and posters were removed.

In an attempt to defuse the situation Mr Roper held an assembly on Wednesday where he claimed the flag makes some people “feel threatened”.

“By using a symbol such as the Palestinian flag that message is lost because for some people they see that flag and they feel threatened, they feel unsafe and they worry because for other people that flag is seen as a call to arms and seen as a message of support for anti-Semitism, for being anti-Jewish, and it was never meant to be like that in the first place,” Mr Roper said in his speech.

He is right; their battle cry “From the river to the sea, Palestine shall be free” is actually a call to invade and destroy the state of Israel. 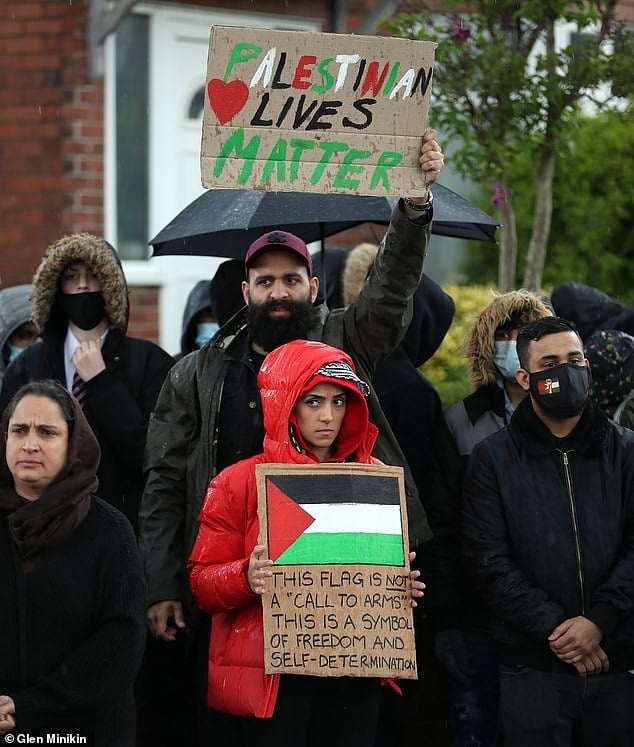 A clip of the assembly – which was being live-streamed due to Covid-19 – was then shared on social media with some claiming his comments were “blatant Islamophobia”.

Mike Roper, who leads Allerton Grange School, in Leeds, was forced to apologise in the wake of the comments and said external speakers with “specialist knowledge” would be invited in to give a lecture.  I recommend Dame Maureen Lipman, or Johnathan Hoffman.

Moazzam Begg, a former Guantanamo Bay detainee who was held in the camp for nearly three years and released without charge in 2005, said on Twitter: “Not even Apartheid… Israel says that” about the Palestinian flag.

While Ross Greer, Scottish green party MSP, posted: “Imagine being a Palestinian kid at this guy’s school, being told your national flag is inherently hateful. Absolutely outrageous and racist behaviour from someone in a position of power.” Imagine being a Jewish kid at that school; Leeds has a large Jewish community.  I know that some pupils who used to attend Allerton Grange, before Mr Roper took over as head and turned the school round, transfered to King David School in Manchester and made a long daily journey by coach to do so. That says a lot about other pupils I think.

An 18-year-old student, who finished sixth form at the school on Friday, said although people have the right to be angry over the headteacher’s comments the protest left her younger sibling “visibly upset”.

The religious makeup of the local area, Moortown, north-east Leeds, was majority Christian (49 per cent) in the last Census, following by 8.2 per cent Muslim, 5.4 per cent Sikh, 4.6 per cent Jewish and 2.7 per cent Hindu.

A petition has now been launched calling for Mr Roper’s “instant resignation” which had around 300 signatories by Monday evening. However, it is unclear if the person who launched it is associated with the school.

It is understood some parents are in support of the headteacher, who joined the school in 2015, and have accepted his apology. Never apologise! Or not in those circumstances.  The activists use it to confirm that you are wrong.

PrevAcademics Use Propaganda, Not Expertise, to Bash Israel
Ayanna Pressley Attacks Israel, About Which She Knows Little, Boston Globe Rushes to Her AidNext