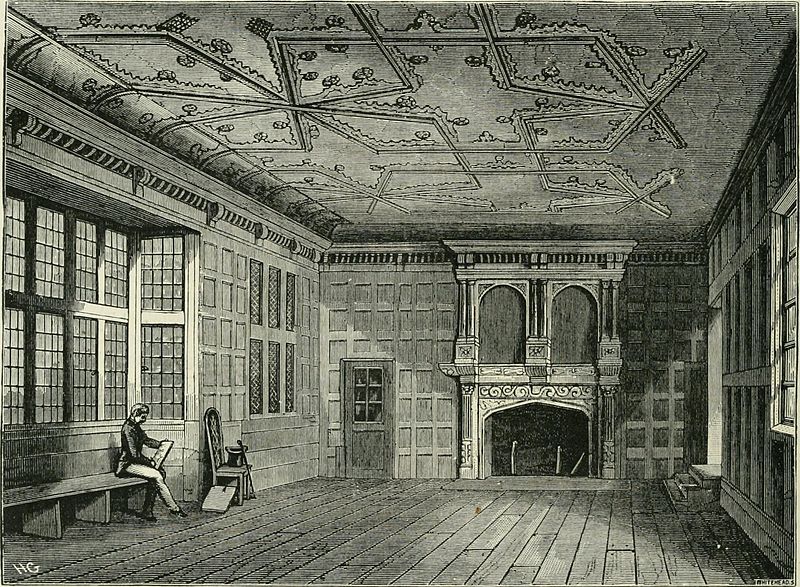 Engraving of the Star Chamber, published in “Old and new London” in 1873, taken from a drawing made in 1836

I’ve got my eyes on you, I’ve set my spies on you, I’m checking on all you do. Not only must Justice be done, it must also be seen to be done.

It’s discouraging how many people are shocked by revelation of information with which they disagree, but how few by political dishonesty or injustice. The political systems and the personalities involved in the U.S. and the UK differ in many ways, but both are based on a priceless principle, the Rule of Law. A vital element of this is Open Justice, together with due process, the commitment to hold trials and official inquiries openly in public. Transparency is fundamental in itself, and as a demonstration for citizens of the fairness of the political and legal system. Exceptions are rare and must be justified by the facts, and be both essential and proportionate. This is most true of issues of national security, a national interest, a subject of political dispute. Inevitability, there will occasionally be tensions between the principle of Open Justice, open discussion, and what are thought to be the requirements of national security which require secrecy. It is understandable that some of the work of intelligence organizations should not and will not be openly revealed.  At the same time concerns about national security do not in themselves justify a departure from the principle of Open Justice.

A secret trial or inquiry is not open to the public, nor is it generally reported, and sometimes there may not be an official indictment or legal consent. The accused or those under examination may not able to have an attorney or to confront hostile witnesses. This has happened in UK in the past and in the U.S. Congress at present. The UK went through the process of secret courts with the existence between the mid 15th century and the 17th century of the Star Chamber, a court composed of privy councilors and common law judges, was accountable to no one, became synonymous with oppression and arbitrary abuse of power, and one that ws used to suppress political dissent, or to eliminate opponents. It was abolished in 1640, but its memory affected the U.S. Constitution since the 5thAmendment to the Constitution stated that no one “shall be compelled in any criminal case to be a witness against himself.” Both the 5th and the 14th Amendments state, no one should be deprived of life, liberty, or property without due process.

On July 14, 1789 the Bastille in central Paris, originally a medieval fortress that became a prison and represented royal authority, was stormed by a large crowd armed with muskets, swords, and other weapons who demanded its surrender. The governor, Bernard de Launay, realizing his troops could not stem the tide, opened the gates. The French Revolution had begun. Ironically, though the Bastille was seen as the locale for the King’s abuse of power, it had in 1789 only seven prisoners, four of them forgers.

More than two centuries later, on October 23, 2019, more than a dozen members of the Republican Party in Congress tried, without muskets or swords, to storm a Congressional Committee room because was hearing, in closed door session, an impeachment inquiry ostensibly into President Donald Trump’s activities in relation to Ukraine. The transparency that should crucial in political discussion and decisions was absent, though as a gesture three members of the Republican party were able to attend the secret hearings.

Irrespective of the value or worthlessness of the hearing, and the truth of accusations or impeachment charges against the President, the fact remains that the Committee process has been secret is troubling, and brings back memories of the former secret trials in the Soviet Union under Stalin. Of course, In Moscow there were open show trials not held in secret, but they took place to make public the “confessions” of “enemies of the people.” Almost all the members of the Bolshevik Old Guard, Kamenev, Zinoviev. Bukharin, admitted to crimes, monstrous crimes, which they did not commit, but were supposedly actuated by boundless hatred and lust of power, by really by the jealousy by Joseph Stalin of potential rivals. However, important secret trials took place. The most notorious was that of Marshal Mikhail Tukhachevsky, “Red Napoleon,” himself a ruthless military leader, formulator of the theory of deep operation behind the enemy’s lines, who was regarded by Stalin as his most bitter rival. Together with other Red Army officers, he was tried in secret, confessed he was a German agent, and was killed.

According to the so-called Kirov law of December 1, 1934, in cases of terrorist organizations and terrorist acts against the functionaries of Soviet power, cases could be tried without the accused being present, and without ant review of the judgements.

Of course Adam Schiff  (D-Cal), chairman of the House Intelligence Committee,  is no counterpart of Joseph Stalin, though he has been culpable on many occasions of what Winston Churchill called “terminological inexactitudes.” Schiff has delusions of adequacy, he is the Torquemada, the grand inquisitor of Capitol Hill, continuing his endless pursuit of evidence of Trump’s collusion with Russia. He has stated on numerous occasions he has “significant evidence,” of this collusion but so far has been unable or unwilling to reveal a morsel of that evidence he has kept secret. Schiff is no paragon of virtue. He admitted on October 24, 2019 he had made up parts of the Ukraine phone call in his opening statement as chairman of the House Intelligence Committee. His inexactitudes are uttered “part in parody,” and apparently he has no intention of burning people at the stake, as the Inquisition did in Seville.

Schiff, however, has flouted the Rule of Law and due process by holding hearings on impeachment issues in secret, from the public and the media, and fellow members of Congress.

He has said that he will reveal  the transcripts of closed down interviews  when it will not jeopardize the investigation, but he still refuses to explain what witnesses may be called at any future public hearing.

Democrats in the house want to increase their closed door interviews in their impeachment inquiry, though they may make them public in the near future. Most of the witnesses who have testified Committee have done so behind closed doors in the basement of the Capitol. Moreover, chairman Schiff cans bar Republicans from calling witnesses, and can refuse to allow lawyers for Trump to be present to hear accusations against the President.

The U.S. Congress might profit from attention to a recent British case. An unusual, perhaps unprecedented, attempt was made to hold a completely secret criminal trial concerning two individuals, at first unnamed and referred to as AB and CD, accused of terrorism. Prosecutors for the Crown argued that a secret trial was in the interests of national security. However, the UK Court of Appeal blocked the secret trial. The judges held that the trial was of an exceptional nature, and that the “core” of it must be held in private, but parts must be in public. They expressed “grave concerns” about holding the proceeding in secret and about not revealing the true names of the defendants, Erol Incedal and Mounir Rarmoul-Bouhadjar, charged with preparing for acts of terrorism.

The Court felt there was good reason to halt the prosecution of the case if it were held in open court. Open justice is both a fundamental principle of the common law and a means of ensuring public confidence in the existing legal system. However, exceptions, which are rare and must be justified by the facts, may be appropriate. They would include withholding information on the basis of national security because that was a national interest of the first importance.

The U.S. Intelligence Committee should be conscious of two factors. One is that tensions between the principle of open justice and the needs of national security will be inevitable, but holding a criminal trial or major inquiry in camera is of “grave concern.” The other is the principle of presumption of innocence. It is valuable to recall the Universal Declaration of Human Rights, Article 11, “Everyone charged with a penal offence has the right to be presumed innocent until proved guilty according to a law in a public trial at which he has had all the guarantees necessary for his defense.”