I have two friends in London and am watching the Russia Today live feed. Which might be paid for by the Russian government but in so far as it enables me to see and hear what is happening live I think it can be relied on to that extent.

In accordance with the Metropolitan Police orders given out last night the Football lads and patriots mustered in Parliament square and were permitted into a small portion of Whitehall at the southern end. The veterans marched through and were given a standing ovation by the football lads as they made their way to the Cenotaph which is about 2/3 of the way up Whitehall. They formed a guard and 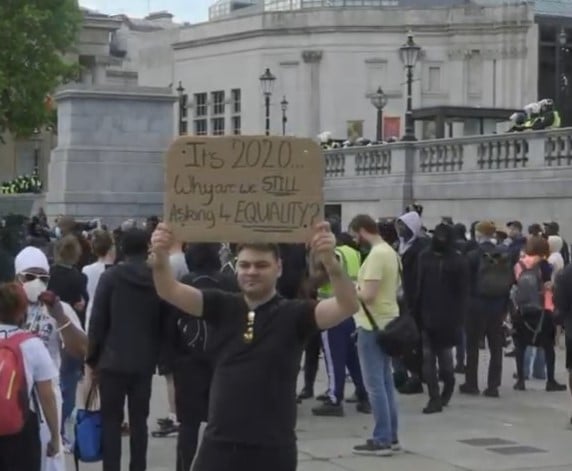 refused to move.  After about an hour the police insisted that they move and allow the Cenotaph and the area around it to be a sterile area guarded only by the police. Reluctantly but obediently, they moved away hoping that the amount of police in evidence would be suffucuent to deter vandals. It isn’t the number of police present; it is their will to defend property etc. The last I heard of the veterans they were protecting the Guards Regiments memorial in nearby Horseguards.

I hear that there were some scuffles with the police due to frustration.

Meanwhile in Trafalgar Square BLM were gathering. Firecrackers were thrown at the police and the chant had changed; it is now African Lives Matter.

A large number of Football lads had broken away from the containment in Parliament Square and their singing was visibly annoying the BLM protestors. The police are dressed in riot gear this week and are containing BLM with police dogs while the Football Lads are on the steps of Nelson’s Column. 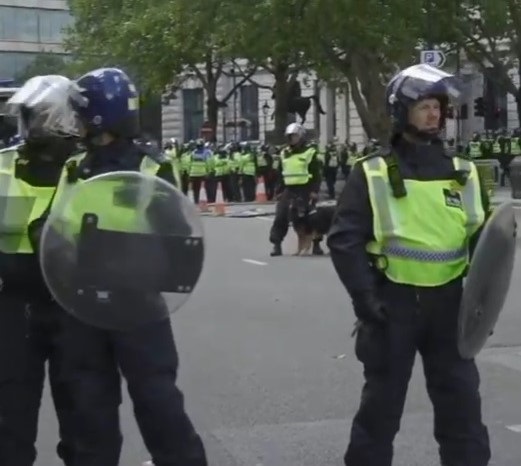 The statue of Nelson is too high to be pulled down with a grappling hook and rope. [I think the toppling of Edward Colston in Bristol last week had been planned for a while. They knew it wasn’t heavy (hollow bronze) and how well secured to the plinth.] But graffiti would also be undesireable.

Antifa hate it when the police use the highly trained and handsome police dogs.

An observation. When a white man raises his arms in what is a sport gesture the press will photograph one arm only and call it a Nazi salute. When a black man raises an arm and makes a fist in the black power salute it’s freedom and diversity. 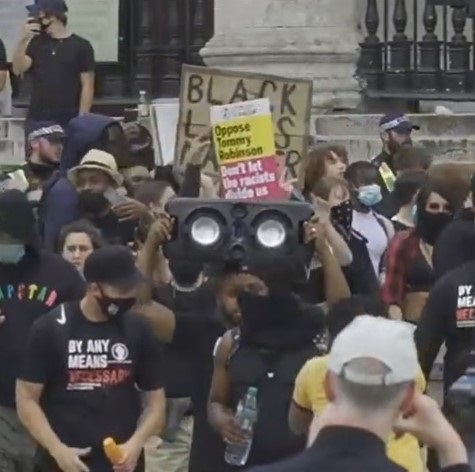 There are not as many BLM protestors as I expected in Trafalgar Square. Either less attended this week, as it was officially cancelled and brought forward to yesterday, or most have stayed in the Hyde Park area. I don’t trust the press to give me accurate figures.

General opinion is that the police have finally started to police correctly, instead of kneeling with the mob, since fear of so-called “right-wing thuggery” . Most of the people present to encourage protection of the monuments are not thugs; the veterans are certainly not. And they are not “right-wing”, just not far wrong. But sadly some today did not behave with the decorum and discipline that we would want and expect. And these are the ones whose actions will be remembered.