Compare and contrast yesterday numerous anti-Trump demonstrations (just in London – so as to compare like with like – Scotland really is another country, and I’m never sure about Sheffield) with today Welcome Trump and Free Tommy

Yesterday numerous groups descended on several locations in central London. The Trump baby balloon (I’m told it was far too small to call a blimp) was allowed to fly at a low level in Parliament square for two hours. Sadiq Khan personally over-ruled officials to grant this balloon the necessary permission. There was a women’s march protesting at President Trump’s ‘mysogeny’ as demonstrated by his relationships during his lifetime with adult women who seem to have been perfectly happy to socialise with him, albeit briefly; they never raise a voice at the industrial scale rape, torture and prostitution of very young white English and Sikh girls by Muslim men over a period of at least 20 years. Ditto FGM, forced marriage, family “honour” murders and the rest. Also a group in Regents Park near the mosque making a continuous noise so as to disturb the rest of the Presidents party and everybody else at the US Ambassador’s residence. All this was allowed.

However today restrictions were placed on the two opposite demonstrations, according to the Metropolitan Police “due to concerns of serious public disorder and disruption to the community.”

the following conditions apply to the procession relating to ‘Welcome Trump’ and the ‘Free Tommy Robinson’ protest.

Any other march that is associated with ‘Welcome Trump’ and ‘Free Tommy Robinson’ cause will contravene the Section 12 Public Order Act conditions.

The women’s march was notable for costumes and banners of staggering .coarseness. Men and women dressed as vaginas. Four letter words I wouldn’t have dared said in front of my late mother. Outside St Margarets church what Sargon of Akkad described as wholesome and family friendly.  Emboldened by the apparent acceptability of vulgarity, and Sadiq Khan’s new found love of free speech, one young woman brought to this afternoon’s protest an inflatable sex doll and an inflatable piglet; the doll’s face superimposed with the face of Sadiq Khan. The last I heard the police had ordered her to deflate said doll, under threat of arrest. Did somebody say one rule for one?

From what I can see of their twitter feed Hope not Hate are not enamoured of the speakers.

A member of the United States House of Representatives, Paul Gosar, is speaking to a far right rally in London, in support of criminal lowlife Tommy Robinson. In case you wondered if Trump is some sort of aberration.

That’s President Trump to you Nick.

Filip de Winter from Vlams Belang just spoke about the “need to organise the resistance to prevent the islamic hostile takeover of the west”.

UKIP’s Gerard Batten has been giving a shocking speech, making a series of vile comments about Muslims, and the Muslim faith. He said, “both our Houses of Parliament are full of traitors” and “they must be swept away.” Ends his speech by asking people to join UKIP.

The more I hear Gerard Batten the more I warm to him, personally. I’d need to assess myself whether what he said really was “vile”; much of what had been said about President Trump and Tommy Robinson recently really is vile, in my opinion.

According to the Guardian (the very left leaning, but not quite as far left as the Independent newspaper) the Welcome Trump march was at short notice forbidden to march from Nine Elms but individuals joined the Free Tommy rally as individuals. Thousands of individuals. There are some photographs. This is the best, I think. 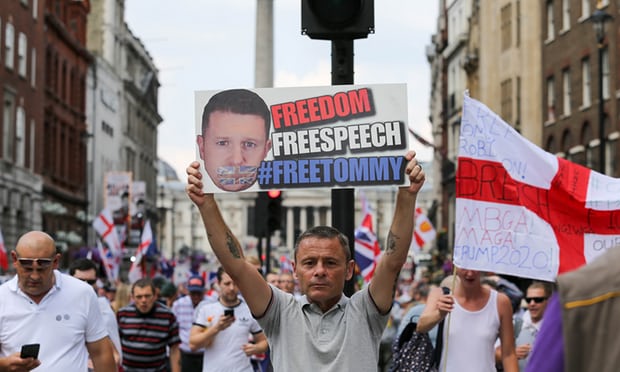 I hope to have accounts and photographs from those who were there later, or maybe tomorrow.

PrevLondon Today
“We wish them [Israelis] death and they bless us with life. I am ashamed to be Iranian.”Next