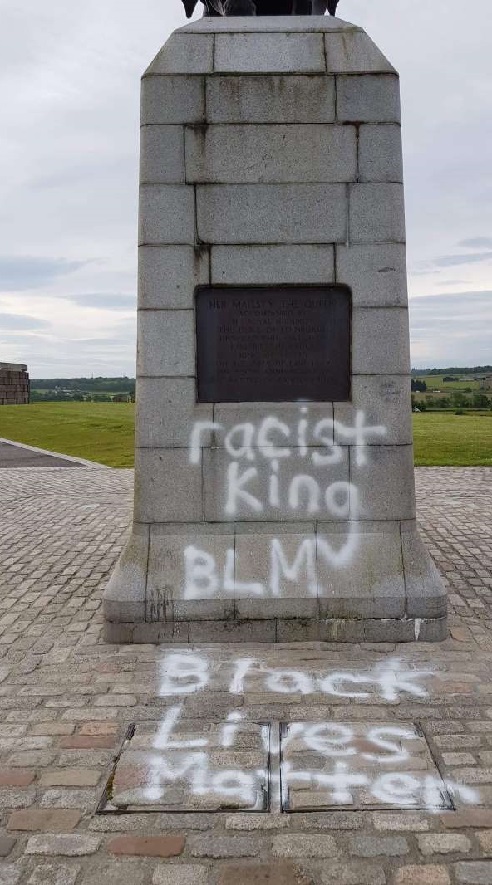 This is all getting very sinister. It isn’t just Sadiq Khan and his agenda to bring down London. Statues, memorials and street names are in danger all over the country from Lord Baden Powell founder of the scout movement in Poole on the south coast (racist, believer in either traditional marriage or celibacy, once praised Hitler before the nazi showed his true colours) to Robert the Bruce, King of Scotland on the site of the Battle of Bannockburn (don’t know, but he was a racist according to the vandal.) Even Gandhi  is under fire for having criticised black Africans during his time in South Africa. That has been once of the interesting things about this Black Lives Matter campaign; the animosity the black activists feel towards ‘Asian privilege’ (as evidenced by their being so well representated in the NHS) and (less surprising knowing how hateful left wing anti-semitism is) ‘Jewish privilege’ (as evidenced by their being so well representated in academia).

This was shown on Saturday night/Sunday morning when I watched a live feed from within the BLM/antifa kettle in Whitehall after the afternoon’s riot. This was run by a curious young Iranian man  who was interviewing everybody he met, while trying to keep warm until the police decided that demonstrators could be allowed to slowly filter out and homewards. He interviewed a few police officers who were unfailingly polite. Then he was accosted by a very aggressive black couple who accused him of lying. When he remarked that he had found the English police to be very reasonable (in Iran he might well have found himself on the wrong end of a crane’s loading hook) I thought he was going to get a beating, such was their anger at someone ‘who isn’t on di front line’.

I haven’t written anything this week as it’s all been available in the newspapers.  I am not travelling on London Underground at the moment so have no original  observations of my own to add.  But this article in this evening’s Telegraph sums up my opinion, at least about the attack on historic monuments.

Sadiq Khan is playing an irresponsible and dangerous game by establishing a new commission to tear down London’s landmarks. The Mayor expects this to be an easy virtue-signalling PR win – but his decision has created division and inflamed tensions in the capital.

In a remarkable admission of failure, Khan has ordered that key statues and monuments be covered up, including The Cenotaph, Winston Churchill, and Nelson Mandela. It’s depressing that the only way we can protect the monuments to those who defeated fascism, protected our freedoms and ended apartheid in South Africa is to board them up. 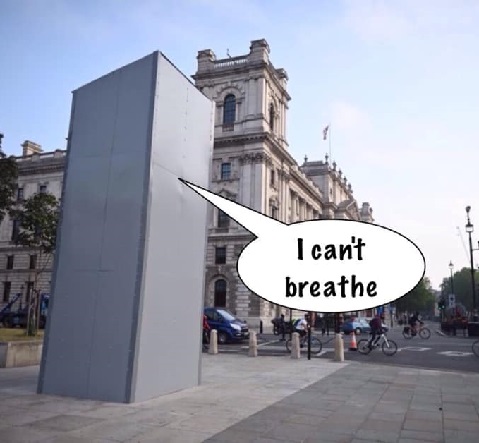 How did we get here as a country? Winston Churchill (left) has regularly topped polls to be called the greatest Briton in history. Only a few short weeks ago, we celebrated the 75th anniversary of VE Day and remembered the heroes who fought. And until now, there has been little debate about statues across the country.

A loud mob has decreed that Britain should no longer commemorate historical figures whose past views do not conform to today’s values. They have so far gone unchallenged and as a consequence we have already begun sliding down the slippery slope which could topple vast swathes of British history.

Labour councillors have called for a mural of Churchill in Croydon to be removed, the founder of the Scouts Robert Baden-Powell will be temporarily removed, and some campaigners are even calling for statues of Admiral Nelson to be toppled.

Actually Baden Powell won’t be removed. Local people and Scouts (and former scouts) from as far away as Wales surrounded his statue yesterday and today vowing that it would not be removed while they stood by it. One elderly man waved his crutch at the council officials. The council officials quickly decided that the foundations were too deep to remove (they should have known that from the planning permission – it was erected less than 15 years ago) but it was boarded up earlier. 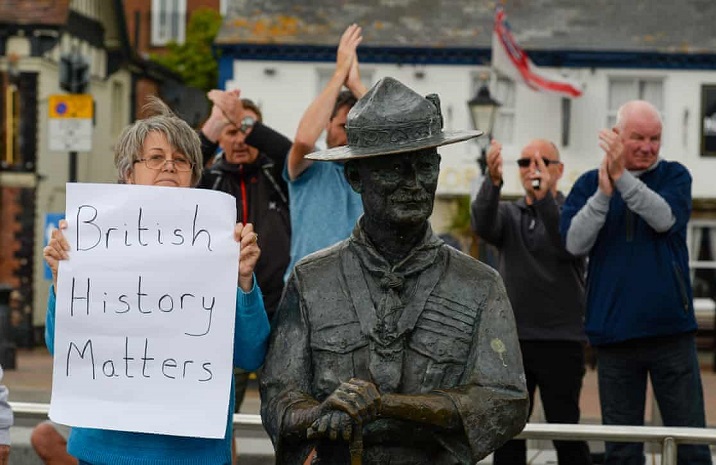 Sadiq Khan’s new virtue-signalling Commission for Diversity in the Public Realm will make City Hall the arbiter of history in London. This should make us all deeply uncomfortable – no politician should take it upon themselves to become judge, jury, and executioner of a country’s history.

In a liberal democracy, history should be debated and discussed, but never hidden or erased. Whether we like it or not, there are many very good, some bad, and a few ugly elements in Britain’s past, and it’s a complicated picture is filled with imperfect heroes. The notion that historical figures should be judged by today’s standards will eliminate every British hero that this country holds dear.

And where do we draw the line? Should Gandhi’s statue be removed because he believed Indians were racially superior to Africans? Will Karl Marx’s tomb be destroyed because of his deeply held anti-Semitism? And should Egypt’s Pyramids and Rome’s Colosseum fall because they were built by slaves and those civilisations profited from that abhorrent trade?

It’s Khan’s job to keep London safe and prevent violence and vandalism on the capital’s streets. His divisive decision to tear down statues will have made the Metropolitan Police’s job even harder in the upcoming demonstrations.

Instead of posturing in this way, the Mayor should take a long hard look at his record of failure which has left communities behind in London. After four years at the helm of City Hall, it’s time he took his fair share of responsibility for the challenges and inequalities that exist in London.

On his watch, violent crime soared to record levels and murder reached an 11-year high, only 12,000 affordable homes have been completed, and 22 major transport upgrades that could regenerate communities have been delayed or cancelled.

BLM and Antifa intend, or intended to march and protest through central London again tomorrow. They claim that the fight against racism, as they perceive it, is far more important than any socially distancing regulations put in place to save lives by stopping the spread of Covid 19. A unity coalition of patriots, veterans and football lads, with the support of Tommy Robinson intend to protect the memorials.

BLM then announced that they will protest today, not tomorrow. I’m starting to see reports of their protest in Hyde Park ongoing. Social distancing be damned. I have no predictions about what will happen tomorrow (other than the monuments will be protected, either by the steel casings, or the unified patriots) but as and when I hear anything I will try to report, at a distance.

Officers, who could have arrested more protesters for breaking social distancing rules and illegally assembling, let the crowds move into Trafalgar Square.

Meanwhile, police officers were booed and had obscenities shouted at them as they moved in to detain two of the protesters in Hyde Park this afternoon.

Around 20 officers moved through peaceful protesters sitting on the grass to seize suspected activists thought to be behind disorder at previous protests, including an anti Capitalist demo in London’s stock exchange in February. A man in a black top and baseball cap was among those led away as members of the crowd started to gather around the officers but who were then warned to be peaceful by one of the protest organisers on loudspeaker.

Amid fears of clashes with right-wing thugs (note the newspapers call the men intending to protect property ‘thugs’ and the vandals who damage it ‘protestors’; one day this will be remembered) nervous police (they should not be ‘nervous’; they should be confident and in control) watched on as protesters left Hyde Park and marched past the boarded-up statue of Sir Winston Churchill and the Cenotaph.

Fortunately Parliament Square was free of any counter-demonstration meaning that Black Lives Matter protesters, who had been chanting ‘f*** Tommy Robinson, marched past the statue without any provocation. 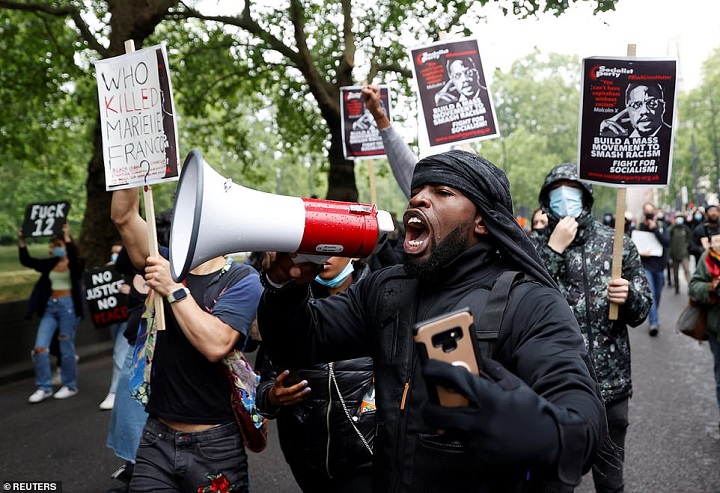 They continued down Whitehall past Downing Street and the Cenotaph, also boarded up, and on to Trafalgar Square.