I’m a couple of days late with this. From Luton Today, The Sun,The Telegraph and the BBC.  Photograph from the Daily Mail

A Luton man and woman (brother and sister both of Kirkwood Road, Luton) charged with terrorism offences appeared at Westminster Magistrates’ Court on 16th July. The pair were arrested following a vehicle stop in Luton on Wednesday, July 3, as part of an investigation by the Met’s Counter Terrorism Command. It followed an intelligence-led joint investigation by the Met’s SO15 anti-terror branch and MI5.

A source said : “They were taken out at an early stage of suspected plans to hit the Pride march.’’ 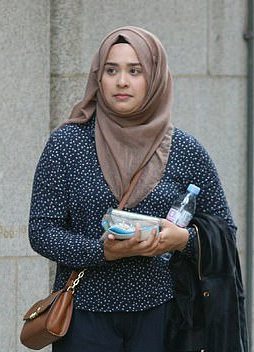 The preparing acts of terrorism charge relates to: carrying out weight, fitness and martial arts training; purchasing and training with bokkens (wooden training swords); booking a firearms training course; requesting and selecting a firearm; and researching and requesting that another person research potential attack targets.

He has been remanded in custody to appear at the Old Bailey on Monday, July 29.

She has been bailed to appear at the Old Bailey on Monday, July 29.

Each newspaper report gives one or two items of information, no more, but not always the same piece, and thus it takes several reports ostensibly the same to build a slightly bigger picture. Despite their rejoicing at Tommy’s imprisonment, and their mocking of his status as a journalist I think the MSM are all terrified of the Contempt of Court laws around press reporting of trials and thus they are erring on the side of such caution they won’t even repeat an earlier report they themselves made.

Mohiussunnath Chowdhury, 27, of Luton, Bedfordshire, was unanimously acquitted by jurors at the Old Bailey of one allegation of preparing acts of terrorism after a retrial.

Chowdhury had driven his blue Toyota Prius at a marked police van before officers sprayed him with CS gas when they saw him sat in his car with the deadly weapon. He had set off from his home in Kirkwood Road, Luton, with the sword and a knife sharpener before he swerved in front of the police van at about 8.30pm on 25 August last year.

Chowdhury repeatedly shouted ‘Allahu Akbar’ during the incident outside the Royal residence at Constitution Hill.

Chowdhury said he had been feeling lonely and depressed and only wanted to get himself killed by brandishing the blade to police officers. Prosecutor Timothy Cray said Chowdhury planned to die as a martyr, fighting in the name of Allah, in the wake of the terror attacks at Westminster and London Bridge last year.

In a “suicide note” left on his sister’s laptop Chowdhury urged his family to ‘struggle against the enemies of Allah’ which included the Queen and British soldiers. Chowdhury had conducted internet searches for beheadings and ‘Prophet Mohammed crimes’ and ‘Mohammed sex slaves’.

His sister Sneha Chowdhury, 24, said her brother was ‘not a trouble-maker, just a practical joker’

Chowdhury smiled and waved at the Old Bailey jury after they cleared him of preparing to commit an act of terrorism after a retrial.