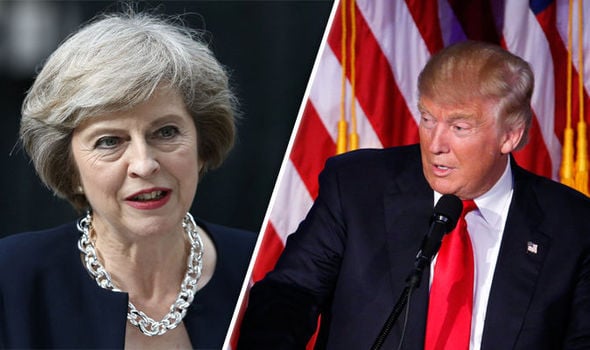 The winds of political change are blowing in the UK as they are in the United States. In both countries the kaleidoscope of the political world is changing as two issues, political sovereignty, and control over immigration, have taken center stage. American President Trump wants to make the country “great again,” and British Prime Minister Theresa May speaks of “Global Britain,” in a leadership role as the global leader for free trade and the hub for foreign investment.  Both the leaders have emphasized, in May’s words, “the sense among the public that political and business leaders have failed to comprehend their legitimate concerns.”

It is no coincidence that May will, on January 27, 2017, be the first world leader to meet Trump, whose mother was Scottish, in the White House. But there is a crucial difference. For President Trump in the new vision it’s going to be “only America first,” and bringing back “our borders.” Prime Minister May also insists on putting the interests of the British people first, intends to leave the European Union (EU), and to remove the country from the jurisdiction of European courts. However, Britain will nevertheless engage with the EU in a strategic partnership on economic, scientific research, and security issues.

Referendums covering the whole of the UK are rare, only three in the last 40 years, in a country with parliamentary sovereignty. In the first such referendum, in 1975, the British electorate voted by 67% to 32% to remain in the European Economic Community (Common Market) which the country had joined in January 1973. The Labour Party cabinet under Prime Minister Harold Wilson was divided on the issue, and the trade union movement was opposed.  Few citizens saw UK as part of a United States of Europe or of a federal Europe.

Skepticism about the value of UK membership, disenchantment with the policies and regulations of European Union (EU), concern about the loss of sovereignty as a result of the Maastricht treaty in 1992, and troubled by increasing immigration, led to greater political critique.  The result was that another referendum was called on June 23, 2016 by Prime Minister David Cameron, largely for party political reasons, to benefit his Conservative party.  The simple question asked, on which the government was divided, was whether Britain should Remain a member of the EU or Leave (Brexit). The electorate surprisingly voted for Brexit by 51.89% to 48.11%, a margin of 1.26 million votes. England and Wales voted for Brexit, while Scotland and Northern Ireland voted Remain.

Britain therefore intends to leave the EU in an orderly exit process within two years after giving notice to leave. In politics as in life divorces are messy and Britain is faced with the problem of reaching agreement on a host of issues, not the least of which is on a new relationship with the EU as well as on questions of immigration, trade and access to European markets, and Britain’s role as the leading European financial center.

The referendum is advisory, and does not bind the British Parliament.  It does not require the government to take any specific action. First, there is the technical problem. On Tuesday January 24, 2017 the eleven justices of the British Supreme Court, the highest court of appeal in civil cases, will decide whether to accept or overturn a High Court ruling on November 3, 2016 by three judges that Prime Minister Theresa May must seek the approval of the British Parliament in order to invoke formal procedures of Article 50 of the 2007 Treaty of Lisbon to take Britain out of the European Union.

The essential constitutional question in Britain, as in the US, is whether the executive, the Government, can exercise prerogative powers in the conduct of foreign policy. The practical problem is that the Conservative Government has only a working majority of 14 in the House of Commons and no majority in the House of Lords.

Article 50 gives a member of the EU the right to leave the union unilaterally. It gives the country two years to negotiate an exit arrangement.  Any arrangement must be approved by a qualified majority of EU member states and can be vetoed by the European Parliament. On June 28, 2016 the House of Commons  approved May’s plan to trigger Brexit, and start the exit process, though 89 MPs including 23 of the Labour Party were opposed.

The real problem is what policy to pursue since the referendum vote was simply on whether to Remain in or Leave the EU which no country has ever done.  There are alternative suggestions. “Hard” Brexit entails Britain refusing to compromise on issues such as free movement of people in order to have access to the EU single market. “Soft” Brexit means accepting free movement and remaining a member of the single market.  Free movement means UK citizens could work in the EU and vice versa.

After months of uncertainty on the part of the British Government the fog has cleared. May outlined an ambitious 12-point plan. At its core is control of immigration. In 2016 Britain took in 333,000 people, 184,000 were EU citizens, while 188,000 came from outside the EU. Britain has been troubled by the increasing rate of immigration.   The government wants to have sovereign authority and make its own decision on immigration, by ending the freedom of movement rules and not be bound by the EU.

For political and economic reasons Britain will leave the single, common, EU market but also will seek “a bold and ambitious Free Trade Agreement” with Brussels. This ambitious program of a comprehensive free trade arrangement is intended to continue British access to the EU regarding goods and services and to seek to remove barriers to trade and investment. But May proposed a “global Britain” in which the country would rediscover its role as a great, global trading nation by making trade deals with the world’s biggest economies. Britain would also work together with EU on major science, research and technology efforts, and on fighting crime and terrorism.

The task is formidable since there have been 43 years of treaties and arrangements. It seems improbable that ratification of arrangements with the 27 EU countries can occur within 2 years.  About 45% of UK exports go to the EU, compared to 5% to India and China, while UK gets 16% of EU exports.  Britain has a trade surplus in services with EU of 17 billion pounds. But May now has the task of reassuring those businesses, such as the Swiss UBS, Toyota, HSBC bank, and Barclays, who are thinking of leaving the  UK  that the City of London will remain the financial capital of Europe and that the country will grow in the future.

The British decision to exit is not intended to undermine the EU or to reject Europe. The Brexit vote may have been based more on emotional than economic factors but it is an indication of dissatisfaction with the status quo. The British government intends to restore national self-determination, to make decisions and control the destiny of Britain without rules from EU and to become more global . Membership of the customs union will be ended.

Prime Minister May has promised ending the jurisdiction of European judges in the European Court of Justice over British law. Law will only be made in the UK.  Immigration will be controlled by ending the freedom of movement rules of the EU.

The conversation on January 27, 2017 between May and President Trump, who share a similar outlook for the independence and prominence of their countries in the world, is likely to be animated.