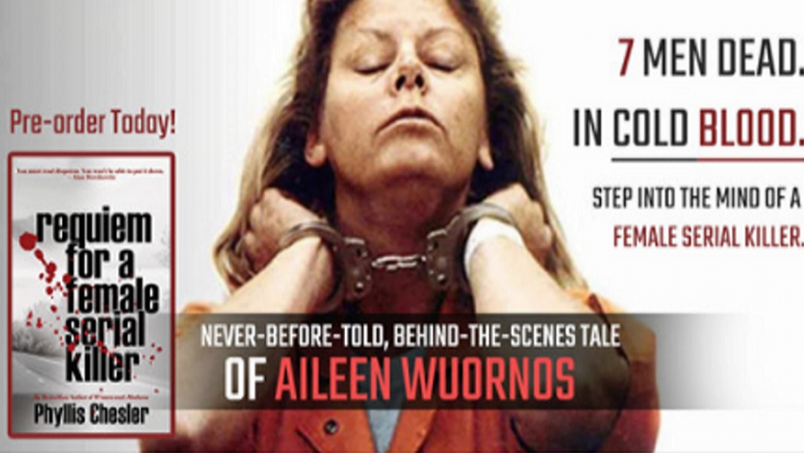 If you’ve seen the 2003 movie Monster, which won Charlize Theron an Oscar for Best Actress, you’re familiar with the story of Aileen (Lee) Wuornos. She was, it will be remembered, the mentally unstable prostitute who found customers by hitchhiking on Florida highways and who, when a john got violent with her in 1989, shot him to death. During the next few months, she hitched rides from, and then killed, six more men before being taken into custody. Tried for and convicted of the first murder, she pleaded guilty or no contest to five others. In 2002, she was executed by lethal injection.

You might think that, having already seeing Monster, you know all that’s worth knowing about Wuornos. Think again. In a powerful new page-turner of a book, Requiem for a Female Serial Killer, the veteran feminist writer and activist Phyllis Chesler, who worked closely with Wuornos in the months and years after her arrest and incarceration, has given us a remarkable document about her that is far more illuminating – and even more engrossing – than Monster.

This book is several things at once. Its first section is a vivid, riveting, and well-nigh novelistic account of Lee’s life during her crime spree. Readers familiar with Chesler’s oeuvre – from Women and Madness (1972) and other feminist studies to her important post-9/11 scholarly work on women in Islam – may be nothing less than shocked by this first section of Requiem. Writing in a gritty, clipped prose style that’s more reminiscent of Raymond Chandler than of Betty Friedan – and that’s perfectly suited to the material – Chesler doesn’t shy away from sordid specifics or from Wournos’s obscenity-heavy vocabulary.

Then Chesler herself enters the picture. Watching the TV news in her Manhattan apartment, she learns about two women who are wanted for a series of murders in Florida. When, soon afterwards, Wuornos is arrested (becoming the first women ever to be charged with serial murders) and information about her begins to dribble out, one of Chesler’s friends urges her to write about it: “This case has so many of your themes: Women and madness, child abuse, a trial, the insanity defense, a woman’s right to self-defense, women outlaws, women in prison.” But Chesler hesitates: “If I get involved in this case, people will say that I’m in favor of women killing men, and that I want preferential treatment for those who do!”

Soon enough, however, Chesler is in Ocala, meeting Wuornos’s lawyer and – like Truman Capote in Holcomb, Kansas, to research what turned out to be In Cold Blood, or John Berendt in Savannah for Midnight in the Garden of Good and Evil – getting the lay of the land. For while Chesler knows and loves Miami Beach, north Florida proves to be another world, populated largely by good old boys who have no truck with Yankee feminists, let alone lesbian murderers.

How to persuade a jury in these parts to spare Lee’s life? Leaping into action – and working for free – Chesler puts together a blue-chip team of experts to advise Wuornos’s lawyer. “I wanted a jury,” she writes, “to hear the truth about how dangerous the ‘working life’ really is; how prostitutes are routinely infected with diseases, gang-raped, tortured, and murdered; and that Wuornos had been raped and beaten so many times that, by now, if she was at all human, she’d have to be permanently drunk and out of her mind.”

But lassoing experts turns out to be the easy part. Wuornos’s lawyer, for whatever reason, resists Chesler’s schemes. (In the end, Lee herself was the only witness for the defense.) Moreover, Chesler discovers that Lee has no concept of how a murder trial – or pretty much anything else in the real world – works. Dazzled by her sudden fame, which she thinks will save her, Lee is incapable of focusing seriously on trial strategy. Chesler tries in vain to snap her out of her childish delusion: “’Lee, look at it this way,’ I say. ‘Christ was really somebody too, and look what they did to him…’ ‘Hey man, that was before he was famous,’ Wuornos says instantly.”

They talk on the phone, they exchange letters, they meet in prison. Yet Lee never really grasps what Chesler is trying to do for her, or why. The writer/activist’s belief in sisterly solidarity is thoroughly beyond the hooker/murderer’s comprehension. Much of the time, indeed, Wuornos views Chesler with suspicion, assuming that the lady from New York, like so many others, is out to make a buck off of her. But if Lee can’t figure Chesler out, Chesler understands Lee better and better. For example, she comes to recognize “that Wuornos’ entire world consists of only money and Johns” and that Lee views “the whole wide world” as having “been waging a private, undeclared war against her for more than three decades.”

Increasingly, Lee drives Chesler up a wall. Yet Chesler can’t help feeling sympathy for “this volatile, trigger-tempered, foul-mouthed child-woman” who, dealt a childhood of abuse and neglect, appears never to have had a chance at a normal life. One of Chesler’s accomplishments in this stunning memoir is that even a reader who doesn’t share an ounce of her sympathy for Wuornos will be forced by the book’s end to acknowledge that, at the very least, Wuornos’s trial was a betrayal of the cause of equal justice.

No, Wuornos doesn’t emerge from this book smelling like a rose. But Chesler does – and then some. Her selfless, stubborn determination – in the face of Lee’s lunacy and the condescension of lawyers, cops, and government officials – to make something good out of the evil that Lee has done is profoundly moving. Not that Chesler ever pats herself on the back; on the contrary, she berates herself at length for having failed to use Lee’s story to educate the public about the brutal reality of prostitution. But one of the triumphs of this haunting work is that Chesler, all these years later, has finally accomplished that aim. I cannot imagine any civilized reader of Requiem ever again viewing a life in prostitution as anything other than a cruel and miserable fate.