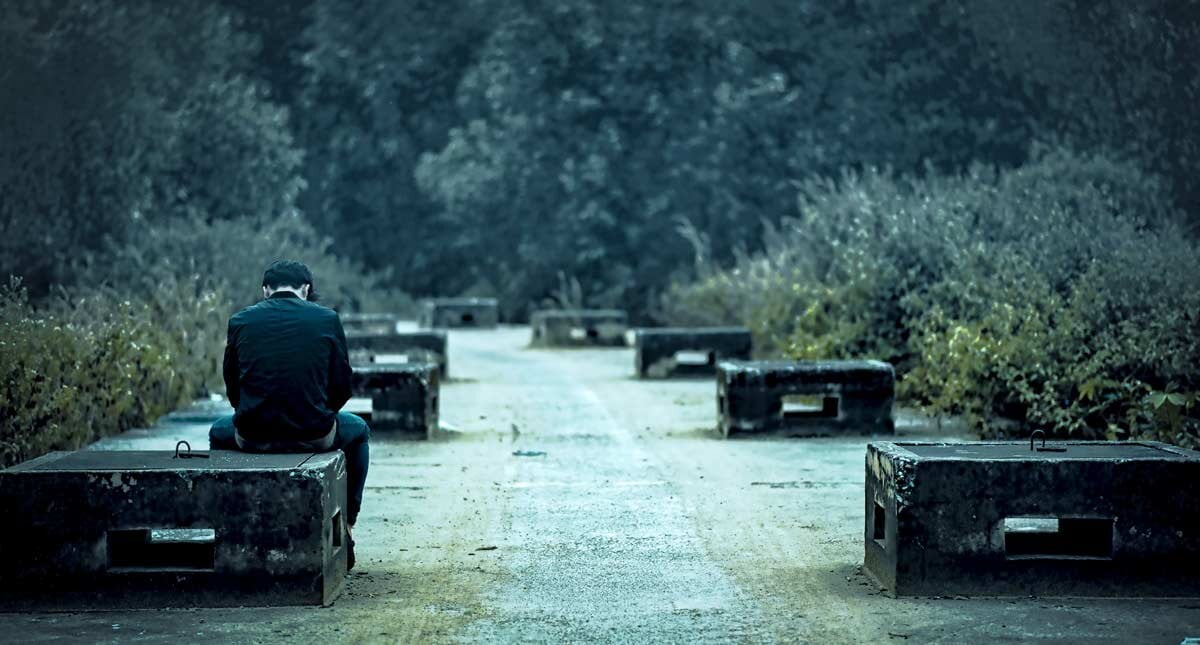 When I was a young doctor, getting on for half a century ago, depression was a rare condition, or at least a condition that was rarely diagnosed, which is not quite the same thing. In its severe forms it was unmistakable. Patients who might to all appearances have everything to live for would turn their faces to the wall, almost literally if their beds were adjacent to a wall; they might even suffer from Cotard’s syndrome, the delusional belief that they had or were nothing, that their bodies had rotted away, that they were in the last stages of impoverishment even when they had millions in the bank. I remember a patient who told me that he was already dead and that all that remained of him was the gangrenous tip of his nose. No logical argument could convince him that he was mistaken. Electro-convulsive therapy (ECT) returned him very quickly to his normal state, that of a successful and prosperous businessman.

It was impossible not to conceive of him as having been ill, pure and simple. But what about lesser forms of depression and human misery? When did misery, understandable in the patient’s circumstances, become illness? There was at the time a lively polemic between those who thought that depressed mood had a bimodal, and those who thought it had a unimodal, distribution. Those who thought that there was a bimodal distribution divided depression into endogenous (that is to say, arising from the sufferer’s constitution) and reactive (that is to say, arising from the patient’s reaction to his circumstances). The former tended to be, but was not necessarily, more severe, extreme and bizarre than the latter; they admitted that circumstances, in some circumstances, could lead to profound depression, to an understandable disgust with life and even to suicide.

It is now generally accepted that those who believed in unimodal distributions, both of depressed mood and blood pressure, won the argument. Personally, I think this is right in the case of blood pressure, but wrong in the case of depression. Once you have seen melancholia, as it used to be called, you cannot mistake it for depression of mood, however prolonged. But I am very old-fashioned.

In the last forty to fifty years, diagnosis of depression has become so common that up to a sixth of adults in western countries are taking antidepressants—or alleged anti-depressants, as critics might say. The word unhappiness has almost been excluded from the lexicon, and no one complains of it; if they complain at all, it is of depression. Deviation from happiness and contentment, at least for more than two weeks, is now an illness: the default setting of Man, so to speak, is happiness.

Clearly, anyone who attends to the history of Rasselas, Prince of Abyssinia will not agree, but few people do attend to it. The question remains, addressed in this book without definitive answer (because none can be given), as to whether the increased number of people diagnosed, or self-diagnosed, as suffering from depression represents a real increase in the prevalence of the disease, better recognition of a condition that was always there but ignored, or perhaps a cultural fashion.

Jonathan Sadowsky’s Empire of Depression has much to recommend it. It is short and succinct, the author writes clearly without resort to jargon to give his writing a false aura of profundity, and he is undogmatic in a field not lacking in dogma and dogmatists. He has clearly read a great deal on the subject, and in general his reasoning is sound. This is not to say that I would agree with all his judgments, but none of them is indefensible.

For example, I think he is far too generous to in general psychoanalysis and Freud in particular. That Freud was often acute in his observation of mankind is true, but so were La Rochefoucauld and Lichtenberg (a much higher percentage of the time, in fact, and much more pithily). Even fortune tellers are often acute observers of their clients, but such acuteness does not require the vast superstructure of theory that Freud claimed to have erected on the basis of supposed observations, but actually on those of preconceptions supported (as by now has been pretty well-established) by a considerable resort to mystification and outright lies about the outcomes of his treatment. Far from having been an aid to understanding, psychoanalysis has often exerted an obfuscating effect both on doctors and patients, and as has been pointed out many times before was run professionally almost as a religious cult, complete with heresies, heretics, heresiarchs, excommunications and anathemata, with which evidence or truth had very little to do. The observation that depressed adult patients have often had emotionally deprived childhoods (if true) is one that could be made without any psychoanalytic theory whatsoever.

One of the problems of depression as an object of study is that there are no clear-cut biological markers to distinguish cases from non-cases. Some endocrinological conditions mimic depression, and some medications undoubtedly cause it. In the great majority of cases, however, there are no measurable bodily changes, except those brought about by the symptoms themselves: in depression, symptoms and disease are one, at least in the present state of knowledge.

The author is concerned to avoid false dichotomies: genetic versus environmental, physical versus psychological, social versus individual, endogenous versus reactive. It is rarely in medicine, he says, that the causes of an illness are both necessary and sufficient; Koch’s famous postulates are not often satisfied even in relatively simple conditions, let alone in something as complex as depression.

Although he says that scorn is not helpful to understanding history, he is somewhat scornful of the idea that there is a moral dimension to depression. At no time does he consider that a conscious effort to be resilient, for example, might play a useful role in the prevention of depression: he thinks that a willingness to admit and accept psychological vulnerability is unequivocally an advance. In many cases, it might very well be so; but it being so would be perfectly compatible with a rapid increase in depression on a population basis. As a colleague of mine, Dr. Colin Brewer, once put it, misery increases to meet the means available for its alleviation.

The author does not (in my opinion) sufficiently consider the cultural significance of the replacement of the word unhappiness by depression in common parlance. The practical effect is considerable. An unhappy person must either put up with his unhappiness, or analyse the reasons for it and try to change either himself or his circumstances. The depressed person is declaring himself ill and placing the responsibility on someone else to cure him. In present medical circumstances, in which doctors have very little time for each patient (and much of that taken up with entering data, or pseudo-data, on a computer), a prescription is the most likely outcome.

The pills prescribed may or may not help; if they do, it may or may not be because of a genuine antidepressant effect. In many cases, however, they do not work, even as a placebo (they may even act as a nocebo, a concept that makes no appearance in this book). Luckily for the doctor, perhaps less so for the patient, there are many different doses and many different pills that can be tried before all pharmacological treatment possibilities have been exhausted. A kind of pas de deux can take place between the doctor and patient lasting many months, by which time the feelings of depression may have remitted in any case.

But things are far from straightforward. It is not unusual in medicine, at least nowadays, to prescribe medicine to a hundred people knowing that it will work in only one of them, but never knowing in which one. This is the logic of the prescription of both antihypertensive medication and statins, which in any individual patient are more likely to cause minor side-effects than to do any good: though when they do good, it is a very great good indeed. And precisely because depression is so protean, so vague and so ill-understood, it is not easy to tell which patient will benefit from which treatment. Is there more rejoicing in heaven over one recovered depressive than over ninety-nine depressives given medication uselessly, or even harmfully? I do not think there is, or can be, a definitive answer.

But the situation is complex. I remember a patient of mine, in her early seventies, who for about twenty years had been lacking in energy, had enjoyed nothing, and had sat about moping. As in everybody’s life, there were factors that could plausibly explain her misery. No treatment worked; she remained the same. I was about to write her off as character-defective when I prescribed a monoamine oxidase inhibitor for her, an old-fashioned drug that requires the patient to abjure certain foods to avoid a potentially dangerous reaction. To my great surprise and pleasure, but also to my shame at having almost written her off as character-defective, she recovered her joie de vivre, started to play the piano again and became vivacious. I found it difficult to believe that this was a mere placebo response: why such a response so late in the day? It is easy to write people off as bad characters, which is not to say that there are no such people.

The story I have just told would not surprise Professor Sadowsky because he has a complex and sophisticated rather than a simplistic and crude view of depression. He is fair-minded rather than polemical, but there are omissions. There is surprisingly little mention of suicide in the book; he does not tackle the problem of how to differentiate between a plausible and a true cause of a mental state. After all, everyone has a reason to be depressed but not everyone is depressed, even if his reason to be depressed is very strong.

I am glad to say, however, that Professor Sadowski is a worthy follower of Hamlet: he does not disdain or despise efforts to explain man’s condition, but does not think either that the heart of the mystery is about to be plucked out.

PrevIf the woke have their way, soon we won’t have ANY culture to speak of
Another Rape Atrocity in IndiaNext