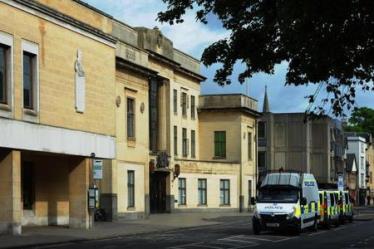 This is unexpected and disappointing news from Oxford. There have been reporting restrictions since even before the trial started in September. I was trying to get a broad idea of progress from one of the court listing websites, and there was one, single, news report in December.

In December the list said that verdicts were awaited,  and then the trial continued into January. Now the Oxford Mail and BBC Oxford report

EIGHTEEN men charged with a catalogue of sex offences against teenage girls have been found not guilty, it can now be revealed. After being charged with a number of sex offences, seven men were acquitted in December. If a Jury acquits, well I believe in Trial by Jury so that verdict has to be accepted.

Then, last week, the Crown Prosecution Service dropped its cases against the others so they were found not guilty.

A legal restriction previously prevented reporting of the first trial. The cases related to alleged offences committed against three girls between 2008 and 2015.

The remaining 11 men were due to face trial this month – however, the CPS dropped its case as it did not feel there was a sufficient chance of conviction.

At a hearing at Blackfriars Crown Court, not guilty verdicts were formally recorded for the 11 defendants on all counts, ahead of the planned start of their trial this week. The authorities took the case out of Oxford and into central London in order to drop it. I wonder why???

The CPS insisted its decision to drop the case was not related to a failure in disclosure.  Spokesman Rob Singh said: “At a hearing on January 25 at Blackfriars Crown Court, London, prosecutors offered no evidence in the case, following a further review which concluded there was no longer a realistic prospect of conviction. This is not a disclosure failure. There was a proper and thorough approach to disclosure. This decision has been reached as part of the process of continuing review.”

“. . . Thames Valley Police accepts the decision of the CPS not to proceed with the second linked trial and to offer no evidence in respect of the defendants in that case. We will review the investigation, as we would in all such cases, to identify whether there is any learning for future investigations of child sexual exploitation. . . We commend the courage of those who come forward to report abuse and will continue to endeavour to bring to justice those who are responsible for the crimes.”

Fine words. But I am informed that the victims are very upset, and that other victims are now reluctant t come forward. There was very little reporting of the allegations, but from what I have been told, in my opinion the level of sadism was comparable to that shown to the jury during the Operation Bullfinch trial.

The trial of these men arrested under Operation Rolo continues in Oxford.

PrevFailing Support for Israel among U.S. Democrats
Trial of Darren Osborne draws to a closeNext