Met Police are slammed for failing to catch knifeman days after he stabbed Christian preacher, 39, in Charlie Hebdo T-shirt at Speaker’s Corner in front of 30 witnesses in broad daylight

An exclusive from the Daily Mail

Scotland Yard was today criticised for failing to catch a knifeman five days after he stabbed a Christian preacher wearing a Charlie Hebdo T-shirt at Speakers’ Corner, as counter-terrorism officer continue to investigate. 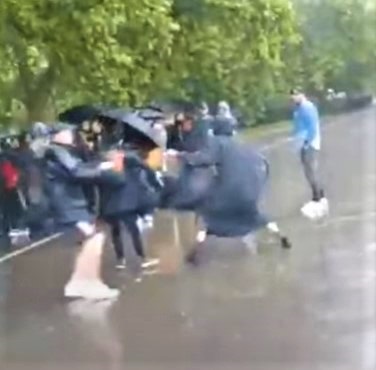 An estimated 30 witnesses saw Hatun Tash, 39, being slashed across the face in broad daylight at Hyde Park on Sunday with some filming what happened (screen shot left) in an area of Central London that is packed with CCTV cameras.

The force are believed to be holding a meeting today to discuss how they police Speakers’ Corner going forward, but questions are being asked about how the attacker got away so easily after stabbing the preacher.

Some witnesses have claimed police quickly dispersed the gathered crowd after the attack without taking witness statements, and a film crew who are regularly at the site have published a clear picture of the alleged knifeman.

Ms Tash since claims to have had police officers turning up at her house trying to speak to her and pressurising her not to talk to broadcast media, before she did an interview with GB News on Wednesday.

When she arrived at Paddington station ahead of the chat she was escorted to the GB News studios by police, who have also turned up at the offices of the Christian Legal Centre, which is representing her, trying to find her. The incident is not being treated as terror-related, despite Ms Tash being from the DCCI (Defend Christ Critique Islam) Ministries group which ‘seeks to preach the Gospel to Muslims using apologetics and polemics’.

Andrea Williams, chief executive of the Christian Legal Centre, told MailOnline: ‘It is extraordinary that the attacker is still at large given the video evidence and witnesses at the scene, some of whom, we believe, know him. The footage clearly shows an attempt to kill, or at least seriously harm, a Christian woman in broad daylight in front of the police. Speakers’ Corner is one of the most monitored places in the UK.’

‘This is not the first time that Hatun has been threatened and assaulted at Speakers’ Corner. The threats and attacks are intended to shut down any critique of Islam. If that’s what happens the attacker wins. We are also concerned that blaming the victim for wearing a Charlie Hebdo T-shirt amounts to an acceptance that it is OK to shut down opposition to Islam through extreme violence. An attack like this is an attack on us all. It strikes at the heart of what our society was built upon – freedom. Freedom to believe, freedom to disagree, freedom to move and speak without fear.’

Responding to the criticism by Ms Williams, a Met Police spokesman told MailOnline today: ‘No arrests have been made at this stage, but officers from the Met’s Counter Terrorism (SO15) are working hard to follow up all lines of enquiry and identify the person responsible for this attack. We would urge any witnesses or anyone with information who has not yet come forward to contact police. The incident is not being treated as terrorism-related at this time.’

Asked whether they turned up at Ms Tash’s home, the spokesman said: ‘Officers from SO15 have been providing support to the victim.’ He added that the force was not prepared to discuss this further.

The Met did not comment on whether the force are discussing policing arrangements for Speakers’ Corner.