Muslim call to prayer across England; but still it is not enough.

The Muslim call to prayer rang out for the first time in public in Southampton. At 1.30pm today the call to prayer was played from the Medina Mosque in Compton Walk to mark the last Friday of Ramadan.

General secretary for the Muslim Council of Southampton, Rashid Islam said: “The message is to stay at home. The mosques have been closed during the pandemic.  We have been working tirelessly and the Muslim community has come together to support each other.

“Other cities across the UK have been holding call to prayers so we decided to ask permission from the city council.”

The call to prayer today was hoped to help the community feel “uplifted” during the health crisis and to act as a unified voice.

From the Maidenhead Advertiser

Maidenhead mosque to broadcast call to prayer on Sunday

Saghir Ahmed, chairman of the Islamic Trust said it would provide ‘much solace’ to the community during a challenging time. The call to prayer will take place at 1.30pm and last approximately five minutes but no prayers will take place in the building due to social distancing rules.

A large number of people gathered in the city centre for Nottingham’s very first call to prayer.

The adhan – the Islamic call to prayer – was broadcast through speakers from 1.30pm on Friday, May 22 at the Nottingham Islamic Centre and Nottingham Central Mosque in Curzon Street.

More than 50 people arrived for the “iconic” event, but social distancing was generally adhered to as people remained in their cars or in household groups on the pavement.

In Thurrock in Essex it wasn’t the call to prayer the Muslim community wanted from the council, it was a cemetery. And barely a month later they got it.  From the Thurrock Nub News

A PRIVATE blessing of a Muslim burial site in West Thurrock took place earlier today (Friday, 22 May) as Thurrock Council prepares for Muslim burials to commence in the borough for the first time in the coming weeks.

The blessing took place just weeks after West Thurrock councillor Qaisar Abbas called for the authority to sanction such a site in a story on Thurrock Nub News. Today Cllr Abbas joined borough Mayor Cllr Terry Piccolo and five faith leaders in blessing the land, on Sandy Lane in West Thurrock, with all attendees adhering to social distancing in line with government advice.

Cllr Abbas said: “We have been working with the council to introduce Muslim burials within Thurrock, with this new service expected to commence in the near future.

Nearby London Borough of Newham. And we are wondering when the new Muslim mayor will impliment the order to clear the “mega-mosque” site at long last.  From the Newham Recorder

Mosques in Newham are broadcasting Islamic calls to prayer for the first time. Nineteen mosques in Newham will broadcast the call, known as the Adhaan, from Friday, May 15 until the end of Ramadan on Saturday, May 23.

Newham Council gave permission for a short Adhaan to be performed every day to mark the breaking of the fast and on Fridays at about 1.30pm, because worshippers cannot attend mosques during the lockdown.

The call will also include a message reminding worshippers to stay at home during the pandemic.

This reminder has offended certain members of the religion of perpetual offence and victimhood. From Al jazeera

UK: ‘Stay at home for Eid’ messages slammed as patronising

And in Middle Eastern Eye

Adverts posted by the UK government online urging British Muslims to stay home and observe the religious festival of Eid at home have been criticised as a display of “double standards” in the fight against the coronavirus pandemic.

Including this tweet by Miqdaad Versi of the Muslim council 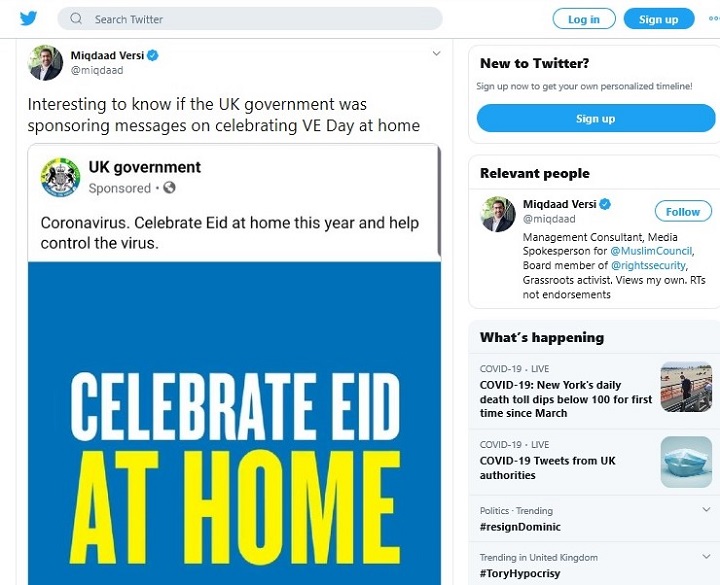 If you follow the link you will see he gets put to rights by those replying to his tweet, including some Muslims, one of whom is from Kuwait who has also been told to celebrate Eid at home.

But getting the call to prayer, grumbling about being treated the same as Christians who couldn’t celebrate Easter as we normally do (Good Friday Walk of Witness cancelled, traditional Passion plays on the town square or village green cancelled, no worship in Church, or outside, no bells, no bank holiday secular fun…. ) isn’t enough.

A mosque leader in Bradford has taken legal action against the government over lockdown restrictions on Friday prayers due to coronavirus.  Under the rules, places of worship must remain shut, with a few exceptions.

Tabassum Hussain, from the Jamiyat Tabligh-ul-Islam Mosque, argued the ban was “unlawful” and has been given the go ahead for a High Court challenge.

In court documents, the government said the measures were justified by the need to “protect life and public health”.

During a High Court hearing on Thursday, where permission was granted for Mr Hussain’s challenge to go ahead to a judicial review, it was argued the restrictions were a breach of Mr Hussain’s human rights to practise his religion.

In documents before the court, Ms Brimelow (for the Bradford Mosque) said: “The regulations not only prohibit an obligatory aspect of Islam, but they have done so at a highly symbolic moment, namely during the holy month of Ramadan when the importance of strict religious observance is attenuated.”

In his ruling, judge Mr Justice Swift said he could “appreciate and sympathise” with Mr Hussain’s frustration but declined to grant an urgent injunction that would have allowed prayers to take place at the mosque on Friday, ahead of the end of Ramadan.

The judge said it was no longer simply a prohibition on communal Friday prayers during the period of Ramadan but a “more general challenge” on the effect of the rules on “the ability to conduct Friday prayers”.

Sir James Eadie QC, representing the Department for Health and Social Care, said in court documents the “undisputed interference” with the ability of people to attend their place of worship was “justified and proportionate by the need to protect life and public health”. He said any changes to lockdown rules involve matters of judgment, adding “the advice in a nutshell is the virus is highly contagious and particularly easy to spread in gatherings of people and indoors”.

Truly if given an inch, this creed will take a mile, and an extra mile again.