From Morning Star News, and the Pakistan Christian Post

LAHORE, Pakistan – Police in Lahore, Pakistan on Monday (Jan. 4) recovered the bodies of two Christian sisters whose Muslim supervisors pressured them to convert to Islam before killing them, sources said. 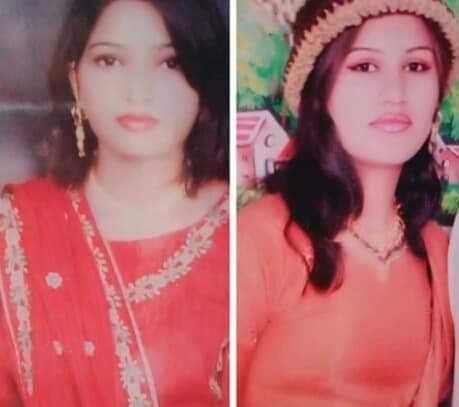 Mushtaq Masih said that police informed him on Jan. 4 that officers had found the decomposed bodies of his 28-year-old wife, Sajida Mushtaq, and her sister, Abida Qaiser, bound and bundled into sacks in an area drainage ditch. Sajida Mushtaq, a mother of four, and Qaiser had been missing since Nov. 26.

“My wife often complained of harassment by her supervisors, but she used to tell me that she was handling the situation well,” Masih told Morning Star News. “After she went missing, one of my relatives shared with us that Sajida had confided in her that her supervisors, Muhammad Mumtaz and Naeem Butt, used to pressure her and Abida to convert to Islam and marry them.”

A Catholic sanitation worker at a local business center, Masih said that his wife and sister-in-law had begun working at a pharmaceutical factory more than two years ago. The sisters had gone shopping the evening of Nov. 26, and when they did not return home, Masih and other relatives registered a First Information Report at the Kahna Nau police station after searching for them, he said.

The family said that before going shopping, the sisters went to the factory to borrow advance money from the factory supervisor Mohammad Naeem. During the investigation Naeem himself confirmed that he gave them Rs.10,000/- advance, saying that after they took the money they left.

The investigating officer of the case, Iftikhar Hussain, said that officers took Mumtaz and Butt into custody after relatives of the sisters informed them that Mumtaz used to pressure the two women to marry him, and that the two suspects had confessed to killing them.

The police have arrested Naeem and Mumtaz while the others have escaped. According to a recent report, after the grant of interim bail Naeem has also disappeared while his family and other relatives have also left the area and nobody knows their whereabouts.

“During interrogation, Naeem confessed that they had abducted the sisters, and after keeping them hostage for a few days for satisfying their lust, had slit their throats and thrown their bodies into the drain,” Hussain told Morning Star News.

Punjab Province Minister for Minorities and Human Rights Ejaz Alam Augustine said that he had visited the aggrieved families. “No words are enough to condemn the barbarity meted out to the two innocent women,” he said, adding that he had directed police to ensure that the criminals and all who facilitated the crime are punished. The minister said the increasing number of forced conversions of Christian women and girls in Punjab was a dangerous trend and that the government was forming legislation to criminalize them.

Augustine added that consensus on the legislation was necessary to ensure its unanimous approval, or else it would fail.

Local pastor, Amir Salamat Maish said that most of the population of Makhan Colony are Christians, poor and illiterate and they don’t have many options but to work in these factories as packers, cleaners, sweepers and as sanitary workers in the nearby factories which manufacture clothes, shoes, medicine, gloves etc. These factories are situated near the drain where Abid and Sajida’s bodies were found. Christian workers are mistreated, face hatred and are considered inferior to Muslims, while Christian girls – especially if they are pretty – are asked to convert to Islam and marry the Muslim men. The case of Sajida and Abida is not an isolated one, but highlights a very common practice in most workplaces. Such cases happen every day in different parts of the country, but are hardly reported.

He said that these are tragic deaths and the sisters only met this fate because they were Christians.

PrevReading terror victim’s family demands to know why murderer was in UK after asylum had been rejected
Wikipedia, Karen Armstrong, and MeNext