To Whitehall to support the three Gurkhas on hunger strike in an effort to persuade the government to give them pension parity with the rest of the British Army.  Or to at least talk to them seriously about the inequality.

This is Day 7 of the hunger strike; I reported here on Day 4 that the police had removed their gazebo shelter as it was considered a ‘permanent’ structure. I know somebody who donated storage boxes with airtight lids; this morning I listened to a Welsh veteran as he handed over a bag of waterproofs.   Today the three elderly Nepalese, two ex-servicemen and a lady of their committee were under umbrellas. 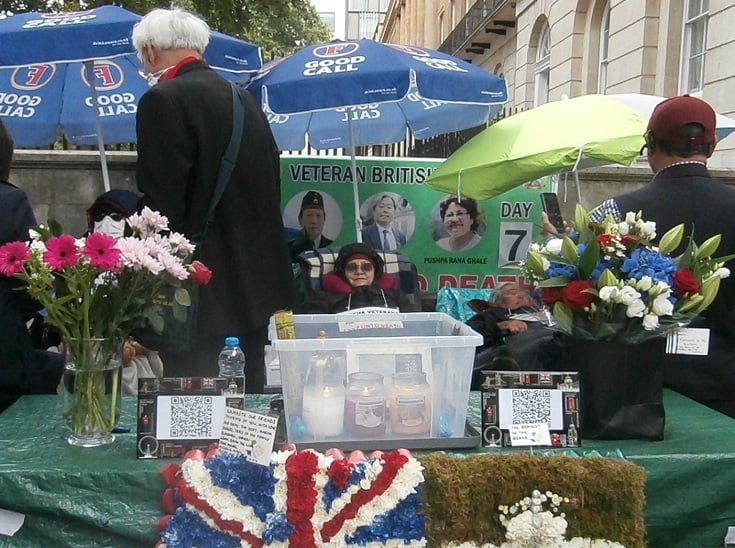 A reminder of how brave and effective the Gurkhas are and what an asset to the British Army they have been for 200 years. 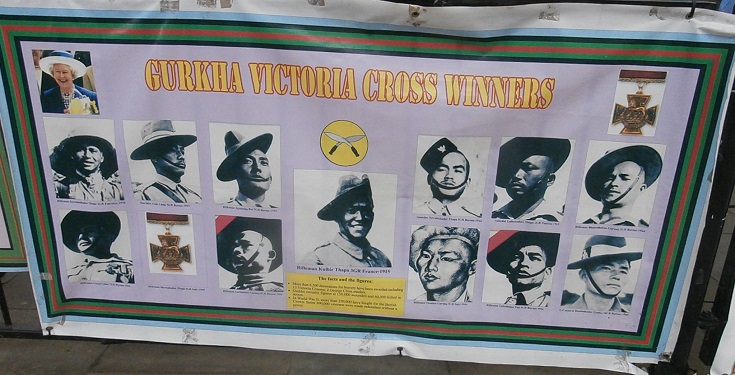 The Victoria Cross is the highest award for military valour in wartime awarded in the UK and Commonwealth.

We chatted to some of the volunteers assisting the vigil and providing support.  They said that the Media have been taking an interest. Kay Burley of Sky news who reported the incident with the gazebos was spoken of well. Nigel Farage has featured the strike and campaign on GB News. As one particular veteran volunteer said, not everybody likes him and not everybody will agree with everything he (Farage) says, but he has a knack of bringing things to public attention.

I couldn’t find out who this news team were from. Short of interrupting their filming and saying “Oi! Who are you?” which isn’t done. 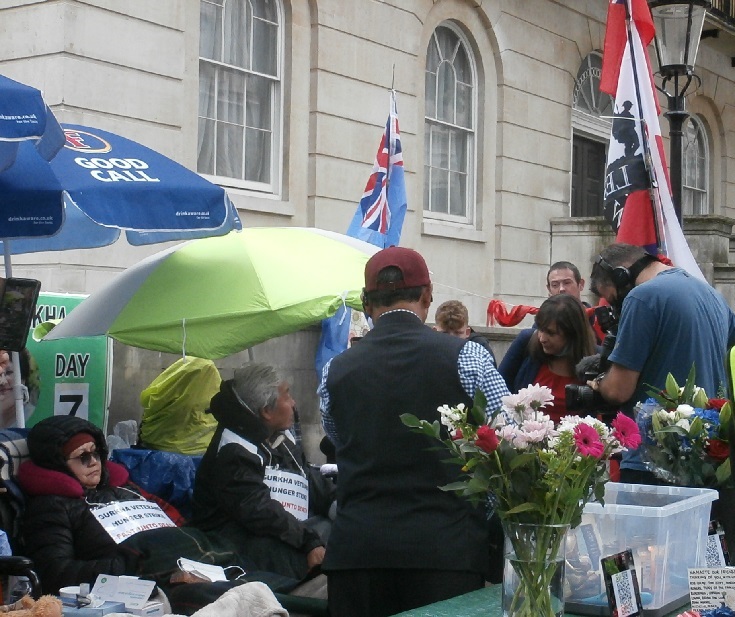 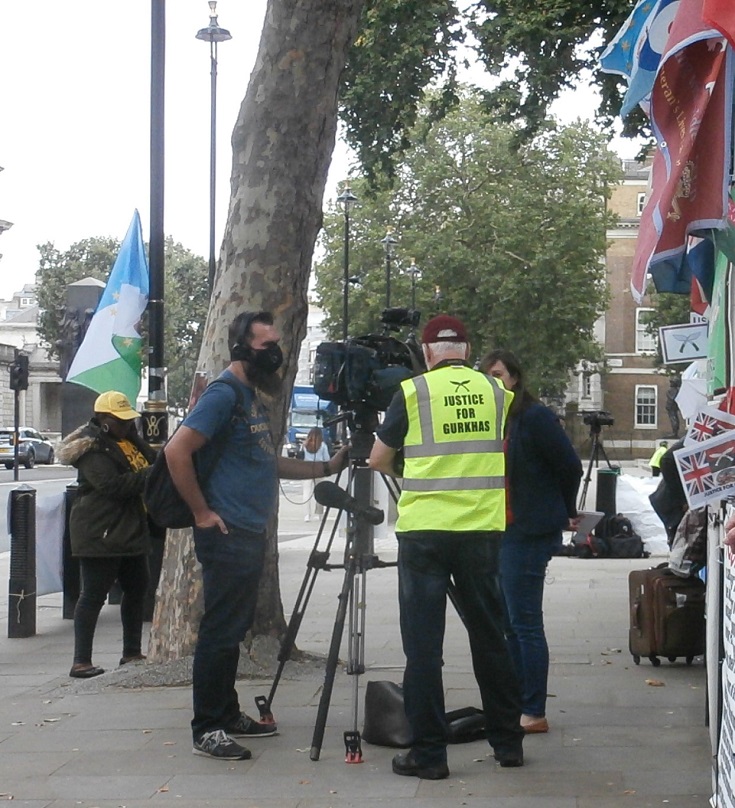 The vigil is competing for space and attention in Whitehall with a Covid conspiracy group and a Nigerian Freedom for Yoruba Tribespeople group protesting about the actions of the Fulani cattle herders on their farmland. I and others believe this to be a thinly disguised jihad by the Muslim Fulani on the Christian farmers. One Yoruba lady is in the photograph above; they were very lively and spread themselves along the pavement and I anticipate they may eventually be asked to budge up a bit, for fairness.

Passers by were signing the petition. We had already signed it on line. It is available at this link. Even US servicemen in London have expressed support and signed. London was busy today, but there was a lack of overseas tourists (for obvious reasons), and Civil Servants (the talk of too many of them still working from home must have some truth to it). 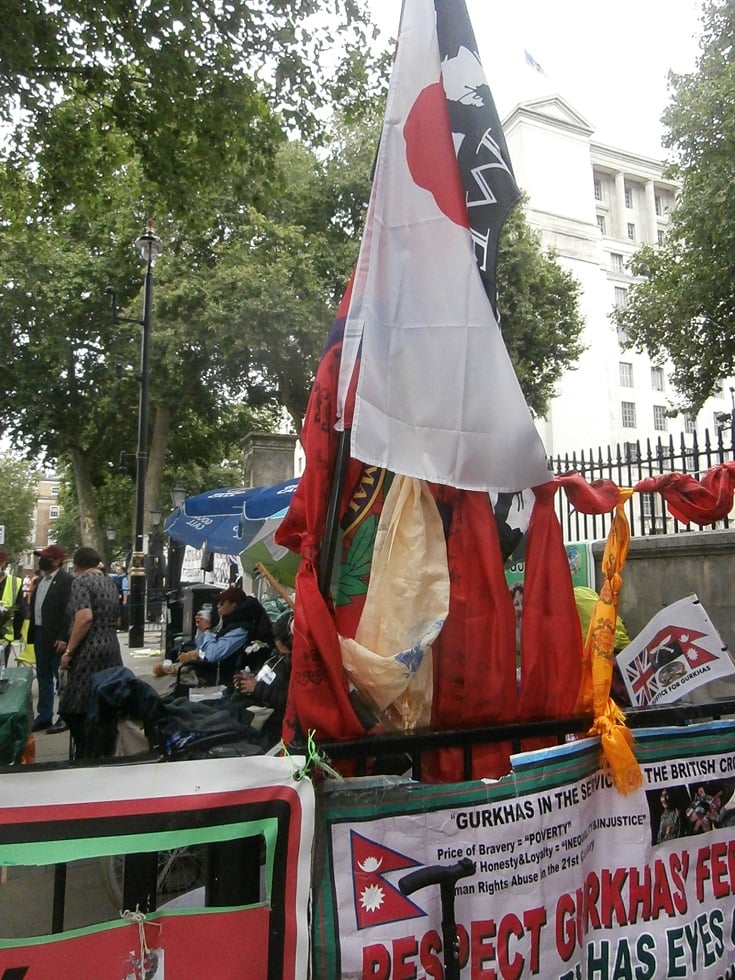 Scarves are an important part of Buddhist culture. They are presented as gifts to welcome or bid farewell, or given as votive offerings at a shrine or during worship. Every day a new scarf is tied. I can understand that having these dismantled unceremoniously by the police would be distressing, just as if they upset a stand of candles by a shrine of Our Lady. 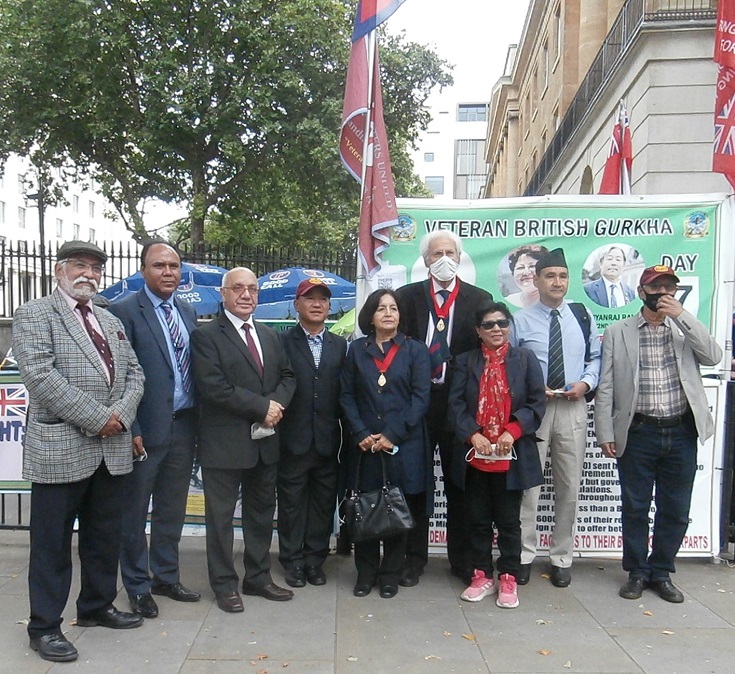 This is the visiting party of Mr Virendra Sharma MP for Ealing (West London) and his team. Mr Sharma (3rd left) leads the All Party Parliamentary Group (APPG) for Gurkha Welfare, and is Co-Chair of the APPG on Nepal. I believe the lady 5th centre is Mrs Harbhajan Kaur Dheer who was the Mayor of the borough in 2015.

There is a lot of public support and more planned.