NEW YORK (AP) — A prosecutor told jurors in an opening statement Monday that a New Jersey software developer was actually a highly trained terrorist scoping out U.S. landmarks for attack from 2000 to 2005.

Alexei Saab, 45, of Morristown, New Jersey, had a double identity while he worked for Hezbollah’s Islamic Jihad Organization, ready to attack Americans at popular locations if Iran was attacked by the U.S., said Assistant U.S. Attorney Samuel Adelsberg.

Alexei Saab, 45, kept up appearances as a “normal” law-abidi 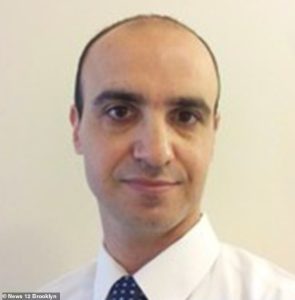 ng US citizen — all while gathering intelligence on a number of Big Apple landmarks, tunnels and bridges . . .potential terrorism targets in New York, Boston, Washington, D.C., and abroad in France, Turkey and the Czech Republic.

“He posed as a regular guy,” Adelsberg said.  Saab was a software engineer working for technology companies who fit in enough that he became a U.S. citizen,

Saab was recruited by the terror organization as a college student in Lebanon and rose up the ranks, ultimately enlisting in the “external security organization,” or unit 910, the prosecutor alleged. In the early 2000s, Hezbollah dispatched Saab and other “spies” to countries including the US — putting them in place to kill Americans if the US attacked Iran, the group’s main ally, he said.

Saab was arrested in July 2019 after being questioned during 11 sessions over several weeks with FBI agents.

In court documents, investigators said Saab told agents he took photographs of buildings and locations including Quincy Market and the Prudential Center in Boston and the Capitol Building, Congress and the White House in Washington, D.C. A video of Fenway Park was recovered from one of Saab’s electronic devices.

Defense attorney Marlon Kirton said the Justice Department’s case is built almost entirely on statements Saab made to investigators before he had been informed of his Miranda rights.
Kirton also argued Hezbollah has never attacked US citizens in America – and that Saab was recruited into the group amid regional conflict between Lebanon and Israel. “No evidence as of today that Hezbollah has attacked people here in America,” Kirton said in his opening statement.

Saab is also facing a marriage fraud charge for allegedly marrying a co-conspirator in 2012 under false pretenses. Saab’s lawyer did not contest that charge.