No borders, no nations, stop deportations.

Paul Embery, the trade unionist, writer, broadcaster and firefighter (from Dagenham) is a man I admire, and whose tweets are always worth reading, even if I sometimes disagree. To disagree on some topics and be able to discuss them in a decent manner is what civil society and free speech is all about. 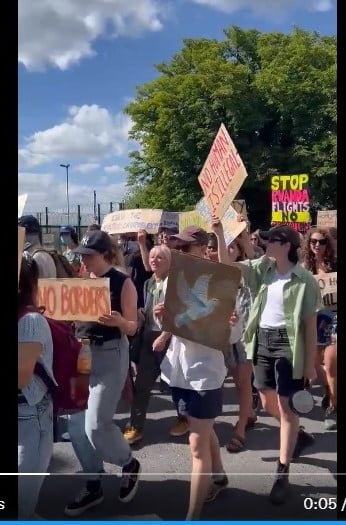 This morning he tweeted here.  He linked to a piece of video posted by a ‘liberal’ activist who had attended a protest at Gatwick airport hoping to stop the deportation of illegal immigrants to Rwanda. The chant at the march was  “No borders, no Nations stop deportations.”
His comment, with which I agree

By coincidence I mentioned the following incident a few days ago on the Facebook page of Darren Grimes, who also appears sometimes on GB News. I’ll repeat it here.
In 1987 when I was a branch secretary of the Civil Service Union which was then called SCPS (Society of Civil and Pubic Servants)  I attended National Conference.  It was in Bournemouth, then a pleasant south coast resort, and took place at the Winter Gardens, then a prestigious concert hall and now a car park. To this day the Status Quo song In the Army Now reminds me of that week. But I digress.
We were warned about a ‘loony’ motion to be tabled next day, I forget by which branch, not that it matters.
“We believe that all borders should be abolished, and the immigration and customs officers etc redeployed in the purpose of world peace and relief of poverty” Or words to that effect.
It’s got to be stamped on quick was the attitude; with nonsense like that doing the rounds we’ll won’t be taken seriously and will be the laughing stock of the other unions.
35 years later it is mainstream policy; oppose it if you dare.
The real agenda; to abolish borders, to abolish the nation state has been a long time patiently building. Like the Trans movement. They have patience to play the long game.
And my union? They failed to protect Civil Service jobs when the Labour government decided to replace old school honest and capable officials with cheaper younger recruits so as to increase diversity. They are now, after mergers and amalgamations called the PSC (Public and Commercial Services Union) and members have screamed ‘Nazi scum’ at me too many times in the years since. A plague upon them.
PrevHuddersfield rapist and grooming gang member Umar Zaman who fled to Pakistan village finally jailed
Medusa, Perseus, and MeNext