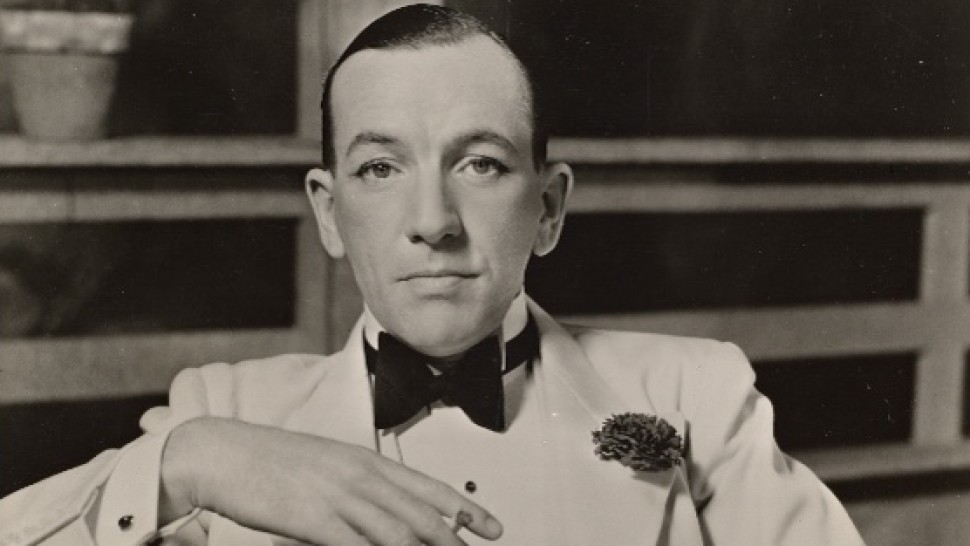 Born on December 16, 1899 in the south-west London suburb of Teddington in a family of lower middle class, genteel poverty, son of an unsuccessful piano salesman but with an ambitious mother, he had little formal education and trained as a child as a dancer and actor who made his stage debut  at the age of 12, but he became an astonishing polymath, one of the highest paid writers of his times, and for many the Grand Old Man of British drama and the entertainer of the world and an international celebrity.

He became the epitome of charm and a life of luxury with his Rolls-Royce, travelling first class, displaying bright turtle necks, flamboyantly using a long cigarette holder, and living part of the time in a house in Jamaica where he died in March 1973. He was the embodiment of art and style, characteristics that had an international impact on the fashion and culture of his time.

Sir Noel Coward was one of the twentieth century’s most prolific playwrights, wrought more than 65 plays, and also extraordinary as a versatile actor, novelist, theater producer and director, film maker, songwriter, TV and cabaret performer, autobiographer, and even in war time a spy. In everything he touched, personal and impersonal, Coward was the incarnation of impeccable style, sophistication, expressing both verbal and artistic wit.   His work remains influential. Many of his plays, such as Hay Fever, Private Lives, Blithe Spirit, Design for Living, remain in the contemporary repertory of theatre and film.

Sir Noel Coward is currently being honored in a major exhibition at the Guildhall Art Museum in London which coincides with the 100th anniversary of the West End, London, acting debut of the 19 -year old playwright. The exhibition illustrates the  ways in which  Coward, often referred to as The Master, and his creative circle,  influenced fashion and culture, and indicated some of the aspects of his extraordinary 60 year long career.

The exhibition drawn from the Coward archives is an eclectic assortment of the items and features of art,  costumes, and memorabilia  from  his homes, personal wardrobe, theater productions, letters, photos, medals, videos original artworks, home movies,  sheet music handwritten notes, pieces of art, his favorite scent, Caron’s Narcisse Noir, his make up kit,   white kid gloves , cream silk foulard and extravagant ties. However, it only very indirectly hints at his gay identity.

What are most significant are particular items. Some are the vintage dresses by the famous couturiers who worked for Coward productions., especially the iconic Molyneux white satin dress worn by Gertrude Lawrence in the play Private Lives. Coward hired and worked with the most gifted theater designers and original set and costume designers. Among them are Oliver Messel, Cecil Beaton, Victor Stiebel, Norman Hartnell, Doris Zinkeisen, and Rex Whistler. Stage productions in which these designs appeared influenced international theatrical and general fashion. Other outstanding items on view are the legendary dressing gowns that Coward was prone to wear on stage.

Considering the Coward’s highly productive output, and the popularity of so many of his works until later in his life, continuing until a 2021 film version of Blithe Spirit, it prompts the question of whether Coward can rank in the classical comic tradition of Congreve, Sheridan, Oscar Wilde, and GBS.  It is worth considering the extraordinary diversity of his output.

His early plays set in elegant drawing rooms, dwelt with the collapse of social norms, with a touch of darkness, and taboos such as cocaine addiction, adultery, promiscuity and a menage a trois. His first great West End , the equivalent of Broadway, success The Vortex   featured a nymphomaniac socialite and cocaine addicted son.  The characters rarely express their true  feelings. At one time he had four plays being performed at the same time in the West End. He wrote not only a number of hit plays but revues, operettas, and musicals.

In Private Lives, which he wrote in 4 days, he simultaneosly mocked and celebrated    modern mores, featuring a divorced couple, with clever  repartee, acerbic barbs, flippant remarks, and demonstrating how romance and rivalry were quickly  rekindled. Coward featured patriotism:  in war time he wrote In Which We Serve and acted as the upper-class captain of a destroyer, a role he modelled on his friend Lord Mountbatten.  He tried current history in Cavalcade, set against the major historical events of the early 20th century. He himself appeared in 70 stage productions. In his work he also parodied, as in Stately Homes of England, upper-class rules and idiosyncrasies. Yet he also wrote both a story , made into the film Brief Encounter,  directed by David Lean, which may be considered the most romantic movie ever made,  and the dark comedy Blithe Spirit.

He exhibited sentiment and spectacle with operattas such as Bitter Sweet, inspired by Die Fledermaus. Though not a composer like Gershwin or a lyricist like Johnny Mercer, and joked in Private Lives, “strange how potent cheap music is,” Coward composed a number of carefully crafted melodies that are virtually standards, “I’ll see you again”, “I’ll follow my secret heart,”  “Someday I’ll find you .”

He became an elegant cabaret  performer, first in London at the Café de Paris, and then in June 1955 in Las Vegas. Sometimes  during his performance he might pen new lyrics to Cole Porter’s list songs.    To the melody of “Let’s do it” he wrote,  “in Texas   some of the men do it, others drill a hole, then do it, West Point cadets   forming fours do it, people say all those Gabors do it.”

Yet, Coward’s biggest and most successful creation was himself.  “I am,” he said, “an enormously talented man, and there’s no use pretending that I’m not.” Certainly, the British entertainment world did not, and called him the Master. He did everything with style including his own creation with his particular staccato manner of language, clipped diction speech, and appearance. On continual display, on and off stage, was his unique personality, debonaire, insouciance, flamboyance, chic, poise.  If James Bond is typified with his dinner jacket and cocktail, Coward is personified by signature, his luxurious and very expensive dressing gowns and long cigarette holder. In all this he did not publicly convey his real sexual orientation, though known as gay by the British theater community. Though he had long term homosexual relationships, they were kept secret from the general public.

For some time Coward has  been remembered in many ways including   a bust in the foyer of the Theater Royal of  Drury Lane.

Adept at social climbing, Coward entered chic circles of theater and public figures of men and women:  among the latter  were Gertrude Lawrence,   Joyce Carey, Judy Campbell,  Tallulah Bankhead, and Marlene Dietrich, and even Rebecca West  and Virginia Woolf, and the Queen Mother. His male circle included John Gielgud, his rival in musical shows Ivor Novello, Terence Rattigan, and  a possible dalliance with prince George , then Duke of Kent, and in the private background  his fellow homosexuals.  He was a generous person.  Gielgud got his real start as Coward’s understudy in The Vortex in 1925. He discovered Elaine Stritch and starred her in a musical in London   and on Broadway.

In his practice of using art and style, and elegance, on and off stage, Coward was concerned    with the visual style. He hired    the best   artists and designers of his time. He use courtiers such as Cecil Beaton, Victor Stiebel and Norman Hartnell, and set designs by Gladys Calthrop and Doris  Zinkeisen. Not surprisingly, these spectacular productions were admired and had an international influence on fashion

Coward was a gifted verbal wit as he showed not only in his comic songs, “Mad Dogs and Englishmen go out in the midday sun,” “ I went to a marvelous party”  but in general.  The totally bald Yul Brynner was “curly.” Gertrude Stein was “literary diarrhea”. The duke of Windsor pretends “not to hate me, but he does, and it’s because I’m queer and he’s not, but  unlike him I don’t pretend not to be.”

Coward learned foreign languages, and performed his star role in the play Present Laughter in French in Paris in  1948.    He lifted the   spirits of the nation in the years of  the Great Depression and wartime , while lifting  himself  at the same time, never boring, as he said,  the living hell  out of the public.

He also said , “I have   taken a lot of trouble with my public face.” That face  and his image of   impeccable  style    and sophistication    continues to be admired fifty years after his death.