I keep seeing controversy about the huge new mosque in Strasbourg; this at the Telegraph sets it out comprehensively.

The Turkish diaspora group behind the Strasbourg project has come under fire despite the urgent need for bigger Muslim places of worship. . . with a prayer capacity of 2,500 and boasting an annex housing a school, restaurant, library and 14 shops, the new Eyyup Sultan mosque is destined to become one of Europe’s largest. 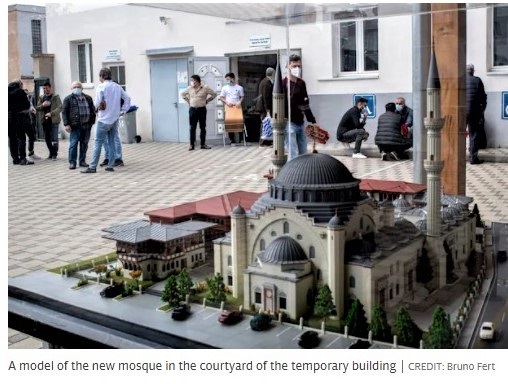 On its website, owners Milli Gorus (National Vision), a Turkish diaspora organisation, trumpet that the Ottoman-style edifice will be “comparable in symbolism“ to Notre-Dame de Strasbourg, the world’s oldest Gothic cathedral and one of the tallest.

However, in recent weeks, a row over the funding of the mosque has seen President Emmanuel Macron’s government accuse it of symbolising something far less flattering, namely “foreign interference” against its attempts to build an apolitical “Islam of France” and to stamp out Islamist “separation”.

With France reeling from a spate of terror attacks – the most recent this week in which a known radical stabbed a policewoman before being shot dead – tackling Islamism has become a hot button issue, particularly ahead of this month’s regional elections and next year’s presidential ballot where Mr Macron is polling to once again to face far-Right leader Marine Le Pen.

The controversy erupted in March after Strasbourg’s Green mayor accepted a request from Mr Sahin (mosque president Eyup Sahin and regional head of Milli Gorus) for a €2.5m subsidy out of a total budget of €32m. While the rest of France bans public funding of new religious buildings, Alsace and Moselle can do so due to a separate status dating back to when it was part of Germany.

Given all the furore, he said that he had withdrawn his request for funding for now. “We may ask for it at a later date but with all the media coverage, our donations have shot up so we are hopeful of getting back on track,” he said.

One mosque-goer, 25-year old engineer Omer Turhan, said: “I have studied in the UK and I can say that it’s far easier to practice one’s faith there in peace. Here, there is growing pressure from the far-Right…”