On the Road to Singapore 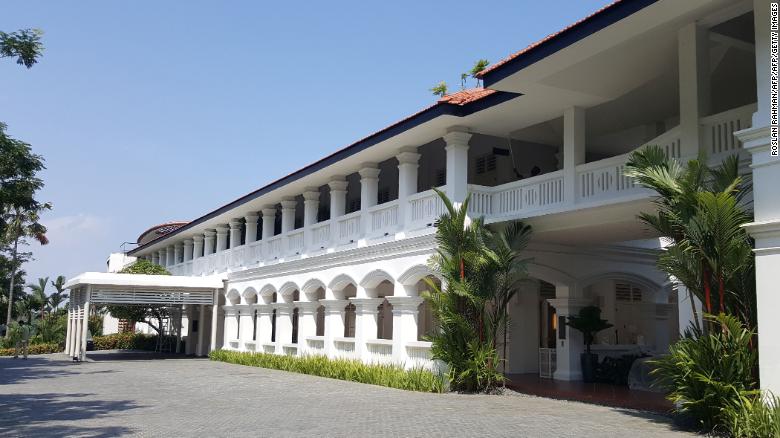 Let’s have Hope, even Crosby, in Singapore. The summit wind came blowing in from across the sea. It lingered there in the luxury Capella Hotel in Sentosa Island, Singapore until the arrival of President Donald Trump and Kim Jong Un, 34 year old leader of the Democratic People’s Republic of Korea on June 12, 2018. Symbolically, the setting is an example of successful economic development without dictatorship.

The wind promises to carry with it Dennis Rodman, 6.7 ft NBA star, involved in PotCoin, a currency of payment for legalized marijuana, and personal friend of Kim. His political acumen, learned on the basketball court, is enviable as he showed in his remark that Trump and Kim are “pretty much the same.”

The summit wind was powerful enough to overcome the storm of insults and taunts on both sides. It blew away and transformed both “rocket man,” once regarded as a short and fat Korean madman, and a “mentally deranged” American into serious, if unexpected, negotiators of outstanding differences. The political roller-coaster of some months was ended with willingness on both sides to have serious talks to resolve issues  in a tranquil and restained setting. It is important that the summit in Singapore is going ahead with a face to face meeting of the leaders of the two countries, even if one is a dictator, not simply by representatives or experts with knowledge of the topics on the agenda.

Meetings of ambitious leaders go back a long way. Perhaps the most extravagent was the Field of the Cloth of Gold, near Calais, in June 1520 where Henry VIII met French King Francois 1 in a luxurious setting attended by hundreds of officials, servants, and horses, to celebrate the Anglo-French Treaty 1514 amid hopes for increased friendship between the two countries, an outcome which did not happen.

Countless other international meetings of heads of state or government have followed. Important ones were the meeting of the Allied leaders, mostly President F. D. Roosevelt and Prime Minister Winston Churchill, during World War II, from the Atlantic Conference in August 1941 to Yalta in February 1945, and postwar at Potsdam in July 1945. But the first meeting of leaders that was specifically termed “summit” was that in Geneva July 18-23, 1955 between President Dwight Eisenhower, Soviet leaders, and British and French prime ministers.

Summits have been held, among others, by U.S.-Soviet and Russian leaders, heads of the Commonwealth,  African nationalists, Third World Organizations, from the Bandung Conference of 29 Asian and African nations in 1955, Non-Aligned Movement, European Union, Davos, G8 and G20 on finance and trade. They have become more frequent for at least three reasons: availabilty of air transport compared to the nine days in June 1919 it took for President Woodrow Wilson to travel from Washington to Versailles; effect of globalization; use of media for political and journalistic advantage. In addition, informal meetings of the top always occur at funerals, at the UN, and even though rarely at barmitzvas.

Summits differ in a number of ways depending on criteria and objectives and personality of the protagonists. They can be bilateral, multilteral, regional, or universal. They can be explicit regular meetings like those held twice a year between France and Germany since 1963, or at critical moments. Many are called for specific issues, arms control, Kosovo in 1990, climate and environment, sanctions against Russia or Iran. Others concern more general issues; terrorism, organizing for peace, improving international cooperation.

Should President Trump have pressed so strongly for a summit with North Korea, even though he may lack knowledge of complex issues, and see it as an opportunity to use his skill as an artist of deals for a historic arrangement in the Korean Peninsula? He may have appreciated that the value of summits is that they bring together major players at the highest level, venues in which leaders make personal contact and can assess relationships and opponents, as in the 12 days of negotiations in Camp David in September 1978 between Egyptian President Anwar el-Sadat and Israeli Prime Minister Menachem Begin. For this, both obtained the 1978 Nobel Peace Prize.

Summits may also be unproductive or achieve little as in the encounters between President John Kennedy and Nikita Krushchev in Vienna in 1961, or the “spirit of Geneva” between the Soviet Union and the West that ended with the Soviet crushing the 1958 Hungarian revolution.

The participants at summits need not address each other by name, rather simply as “You’re the Top.” They don’t need Mme. du Barry to tell them that a well-developed personality is important. Clearly, Trump believes in summit first, details later. It took some time before real progress was made in arrangements for the Singapore summit. It was only clinched when in the Oval Office, General  Kim Yong Chol, former NK intelligence head, on June 1, 2018 delivered a large letter, a conciliatory personal message, “very interesting letter,” from “the Glorious Leader” to Trump.

This was surprising for two reasons. One is that it was the first visit by a senior NK official to the White House in 18 years. What was more astonishing is that General Kim Yong Chol had been banned from the U.S. because of his role as a chief spy, the head of NK’s main intelligence agency, and said to be responsible for two incidents. One was the cyber attack on the computer system of Sony Pictures Entertainment in December 2014. The other was in 2010 the sinking of a South Korean warship that killed 46 sailors.

President Trump has been reminded of previous problems in negotiating with North Korea, particularly the one in which Presient Bill Clinton was involved in 1994 with the present Kim’s grandfather, Kim il-Sung. At that time by the Agreed Framework, North Korea, in return for fuel oil and nuclear reactors from the U.S. agreed to stop all production of plutonium, but it did not do so and instead created a secret uranium enrichment program.

What is paramount for Trump is verifiable, irreversible denuclearization of the Korean Peninsula, but he has acknowledged this will take time and that no final solution can be reached at one summit meeting. But as a minimum it provides Trump with the opportunity to get to know all about Kim. He is also aware that even if NK forgoes nuclear research and long range missile capability, it still has a formidable arsenal of conventional weapons including biological and chemical, and missile launchers. The overall task of Trump who has restrained from “maximun pressure,” is to persuade NK that its security does not depend on nuclear weapons, and that it will profit from economic benefits, security guarantees, and relief from sanctions.

Important for Kim is that the U.S. should withdraw the 30,000 troops it has in the Korean peninsula. Kim appears more concilatory partly because he is interested in economic development and the removal of sanctions. He has halted weapons tests and has destroyed a test facility for intercontinental ballistic missiles. He also agreed to the release of three American prisoners.

The two questions now are whether any general agreement can be reached and if Kim can be trusted to abide by it? In view of past experiences in diplomatic negotiations, Trump should be conscious of various factors: always expect the unexpected; do not enter in bad deals for the sake of making a deal as in the July 2015 Iran JCPOA deal; do not rely solely on personal charm to be persusive or obtain concession; get support of other nations, particularly China and Russia, not only South Korea, who have considerable interest in the Korean Peninsula.

Russia has an interest in a peaceful solution, partly because of its policy in extending the Trans-Siberian Railway through  North Korea to Seoul, South Korea. The Chinese role is less clear, though it may be connected wih the U.S. proposal to impose 25% tariffs on $50 billion worth of imports from China. However, China has resumed flights to Pyongyang.

Why is Kim, a dictator with as many facets as Peter Sellars in his movies, agreable to a summit? Various explanations are possible. For him the summit is a personal triumph , good political theater, a possible end of his diplomatic isolation and a step to becoming a participant in the international communiy, desire for security, eagerness to get sanctions relief, and genuine interest in conciliation with the U.S.

The summit is worth trying, though North Korea is an unpleasant dictatorship. If it works, the world will have the prospect not only of a peaceful Koran Peninsula but also the pleasure of seeing Kim with Donald Trump at the Mar-a -Lago golf course in Palm Beach, Florida.