The Muslim Rights Concern, MURIC, has warned that there is the presence of Boko Haram in the South West. The group believes that the barbaric attack on the St. Francis Catholic Church Owo, that left many worshippers dead, was carried out by Boko Haram and warned strongly that more Churches and mosques may come under such attack

MURIC strongly condemned the terrorist’ attack, calling on the government to act decisively and arrest the attackers.

DAILY POST reported that the attackers killed dozens of worshippers during Sunday service and MURIC said they should be arrested immediately. MURIC’s statement was signed by its director, Professor Ishaq Akintola.

The Guardian reported on the massacre yesterday evening. I apologise for not reporting at the time; I was celebrating Pentecost and the Queen’s Jubilee in my home town.

Gunmen launched an assault on a Catholic church in Ondo state in Nigeria during mass on Sunday, killing more than 50 people in a “satanic attack”, local officials and volunteers said.

The attackers targeted the St Francis Xavier Catholic Church in the town of Owo as the worshippers gathered on Pentecost Sunday, according to local officials. They gunned down parishioners and detonated an explosive device, local media reported. 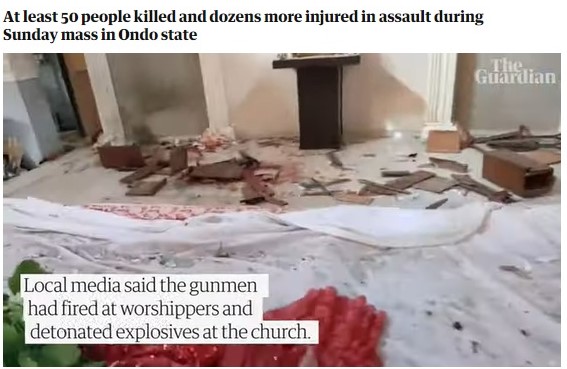 Doctors, local officials and volunteers helping the injured said the death toll was at least 50, with dozens being treated for injuries in overwhelmed local hospitals.

The governor of Ondo state, Arakunrin Oluwarotimi Akeredolu, condemned the “vile and satanic attack” on Sunday and pledged to find the assailants.

Rev Augustine Ikwu, a secretary of the Catholic Church in Ondo, said in a statement that the attack had “left the community devastated. . . We turn to God to console the families of those whose lives were lost”.

The Guardian is leery of stating motive and background of those responsible, unlike the Nigerian Muslim Group mentioned in the first part of this post. The Guardian says they are likely to be ‘ethnic Fulani terrorists, sometimes referred to as bandits . . . from a historic conflict between pastoralists and local communities over access to land”

MURIC is in a better position in Nigeria and work among Muslim inhabitants. If they say it is Boko Haram I would give their local knowledge credit.

“This latest attack is indubitable evidence of the existence of Boko Haram in the South West after their penetration into Niger and Kogi States,” the group said. “Going by Boko Haram modus operandi, we warn that mosques and more churches may be the next targets because this was how they started in the North. We, therefore, ask for protection for all churches and mosques in the region,” it said.

MURIC sympathised with families who have lost their loved ones in the attack and also prayed for the wounded who are receiving treatment in hospitals.