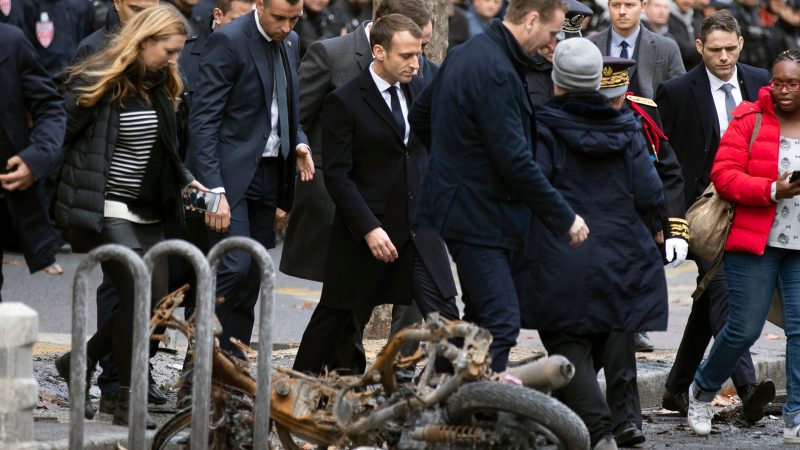 The last time I saw Paris, I heard the laughter of her heart in every street cafe, her heart was warm and gay. I’ll remember her that way. I also remember the march celebrating the liberation of Paris on August 26, 1945 of General Charles de Gaulle and his entourage, to accompaniment of cheers, down the Champs Elysees from the Arc de Triomphe to the Place de la Concorde and on to Notre Dame Cathedral. They walked down one of the most famous streets in the world, tree lined, elegant, with its gastronomic restaurants, bars, four-star hotels, and boutiques.

President Emmanuel Macron had a different, less joyful, experience, walking down the same Avenue, on December 2, 2018, greeted by boos and jeers and a hostile reception. Since November 17, 2018, Paris has been more akin to a war zone, in which the bright golden haze is not the result of sunrise but of arson and burning by rioters and demonstrators in the famed, fashionable and expensive streets and areas of the capital, the Louvre, Place Vendome, Opera. The context has been the escalation of protests, violence and destruction not only in Paris but also in many places in the country. This is violence in the streets of a kind not seen since the students and workers revolt in May 1968, and to lesser degree the banlieues riots of October-November 2005.

Unlike previous historical French movements or demonstrations, the original 2018 protestors had no clear political objectives other than opposition to the planned rise in taxes of fuel and diesel, which President Macron saw implementing climate change policy, limiting greenhouse gas emissions, and leading the path to green energy in France. The price of diesel has risen by 23% in the last 12 months in France and taxes make up about 60% of the total price of fuel. The proposed tax, intended both to raise revenue and to cut car pollution, would have raised gas prices of a liter by six cents on diesel and 3 cents on gas.

The protests began as a grass roots citizens movement, the result of a post on Facebook by a 51 year-old woman angry at the planned tax, who encouraged others to display their anger by videos. Quickly, throughout the country other protests, mostly by those who rely on cars to get to work, were related on Facebook. This was France erupting in anger.

Unexpectedly, the activity on the social network led to the movement that became known as gilet jaunes,the fluorescent yellow vests, the color of the jackets that motorists must carry in their car and are supposed to wear when they have roadside problems. Protestors, starting with about 285,000 on November 17, have continued daily, blocking roads around the country, in Toulouse, Bordeaux, Nantes, as well as in the capital, and preventing access to shopping malls, fuel depots, airports.

The country has experienced the torching of at least 250 cars, smashed windows, attacks on police, setting fire to banks, shopfronts, and houses, ripping up benches and traffic lights, looting, and clashes with the police. Symbolically, attacks have not only been on commercial property and notable stores, Apple. Dior, Chanel, but also on symbols of the French Republic, graffiti on the Arc de Triomphe and smashing of the statue of Marianne, emblem of France.

The protestors are mostly working-class people, low to middle income people, young and middle aged, mostly motorists, secretaries, factory workers, delivery workers, individuals from cities and rural areas across France, critical of the proposed fuel tax. They were not racist or nationalist. But the protest soon became widespread nation-wide, increasing in dimension and scope, with opposition to Macron’s pro-business economic policies, and discontent over parts of the government agenda, social and economic issues, changes in pensions policy, unrelated to the fuel tax, by other groups, such as ambulance drivers, the CIT, the largest public union, high school students unhappy about changes in admission policy, and vandals, casseurs,who caused casualties.

The yellow vests, are not attached to political parties or trade unions, and have no organized structure, though some come from the hard left and far right, but the protests, began to include demands for increases in wages, pensions, and social benefits, a kind of impromptu rebellion of middle class and blue-collar workers outside the big cities.

The surprisingly large protest movement is paradoxical in a number of ways. Macron as presidential candidate created his political party, La Republique enMarcheas a grass roots movement, one that would listen to the people and that operated with door to door activity. The opposition grass roots movement and incurring  violence grew as a protest against what it considered an unfair tax and social system, the result of more business friendly changes in the economy and proposals by Macron, insistent on reforms to end the wealth tax except for real estate, cuts in taxes on companies to make business more competitive, rise in the social tax,  elimination of civil service positions, cuts in housing aid, no increase in minimum wage. Critics sees the programs of Macron, labelled president of big business, as leading to employment and wealth being concentrated in the big cities and allegedly to the detriment of peripheral France, rural areas and smaller towns. Estimates are that the richest 1% gain most, and the bottom one fifth would be worse off as a result of tax changes.

Paris is worth more than a fuel tax. According to public opinion polls, 70% of the French population supports the protestors. Macron, losing popularity, blinked and was forced to backtrack and make concessions. On December 4, 2018 government officials announced that the planned fuel tax increase would be suspended for six months in order and there would be an immediate freeze on gas and electricity prices, to ease tensions. No tax they said should endanger the unity of the country. Yet France will pay the price for Macron’s political and modernizing policies, fulfilling his objectives to implement climate change, and to instill fiscal discipline in the French budget.

A second paradox is two-fold. One is that the French taxes on fuel account for a smaller proportion of total prices than they did before Macron took office. The other is that Macron’s fuel tax plan was less than some other countries in the EU which has not led to serious protests. It is the Netherlands that has the highest tax on unleaded gas in the EU, at 68% of the total, while France has 64% on unleaded and 59% on diesel.

A third factor is the cost of the demonstrations, not only in damages of property including Apple, Dior, Chanel, but also in lost revenue as the country is experiencing cuts in tourism, hotel reservations, purchases in small retail and luxury shops such as Hermes, SMCP, and prestigious department stores, Au Printemps and Galeries Lafayette.

Most relevant from an international point of view concerning events in France is the realization that policies to fulfill climate change proposals and to satisfy green voters have costs. The Paris Accord of December 2015 set the goal of keeping the increases in average global temperature below 2 degrees Celsius, 3.6 Fahrenheit, by the end of the century, and limiting the rise to 1.5 degrees if possible. Thus, greenhouse gas emissions would be reduced by at least 40% by 2030 compared to 1990, on the road to a low carbon society.

But little progress has been made. An additional paradox is that the UN meeting on climate control at Katowice, Poland, December 2018, is taking place in an area of coal mining where pollution is bad. Macron is determined that France be a constructive partner in the fight against global warning, to reduce reliance on fossil fuel. In spite of protests, he argues there is a global environmental alarm, and he is staying with his climate change agenda, and making “our planet great again.”

But he, and especially the Trump Administration are now aware of the political and economic costs and consequences of dealing with the climate issue by imposing fuel taxes. Not the least of the costs is that his policy has led to the protests that have added to the problem, not the solution, by setting fires throughout France and thus adding to global warning. It is still true that Paris is not for burning.