From the Shropshire Star the BBC and Yahoo News

A young girl was “passed around like a piece of meat” as she was sold for sex and humiliated by a group of five Telford men, a court has heard. The offences are alleged to have taken place in Telford and started when the girl, now an adult, was just 12.

The victim was allegedly forced to perform sex acts in a churchyard, raped above a shop on a dirty mattress, and violently abused when she tried to refuse their advances.

Five men appeared on a variety of charges at Birmingham Crown Court yesterday. 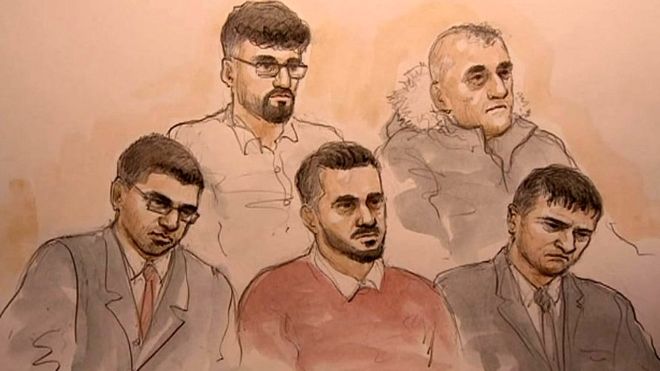 Opening the case on Monday, Michelle Heeley QC said: “This case involves the sexual exploitation of a young girl, passed around like a piece of meat for the sexual gratification of several young men, some of whom are in the dock.

She added: “She was befriended at a time when she was low, by a man called Tanveer Ahmed.”

Ahmed did takeaway deliveries for Perfect Pizza in the town, with jurors told the location was relevant, as the victim claimed she was assaulted above the shop.

The jury heard Ahmed was not on trial alongside the other defendants, having been deported to Pakistan for “unrelated offences”.

After “befriending” the young girl, it was alleged Ahmed started forcing her to perform sex acts with other men.

Ms Heeley said: “One night he drove her to a flat above a shop, he took her into a room where there were three older men, and he told her she had to have sex with these men.

“She did not want to have sex but she was forced to, she was pushed down on to an old dirty mattress, and raped.

“Sadly for her, this did not happen just once, but on other occasions, when she was spat on and raped – all orchestrated by Tanveer Ahmed.”

Ms Heeley said Ahmed forced her to perform a sex act and said if she refused he would call her a slag, slap her and leave her stranded in random areas in Telford. Ahmed continued “selling her” for sex, including passing her details on to men, the prosecution said. Ms Heeley said when the victim tried to refuse, Mr Sultan would make threats against her and her family and claimed he would “burn the house down to the ground”.

Jurors heard that this is how the girl came into contact with the first defendant, Mohammed Ali Sultan, 33, formerly from Telford.

Ms Heeley said: “Ali Sultan would take her to meet other men, in the same way Tanveer Ahmed had. Men would phone her and Ali Sultan and Tanveer Ahmed would make her answer, and do what the men wanted. The abuse took place at a number of locations, including above Perfect Pizza and in a churchyard in Wellington, amongst others. Ali Sultan would verbally abuse her, calling her a slag, and on occasions slap her, or pull her hair.”

On a later occasion he allegedly raped her, coercing her into repeatedly meeting up by threatening to tell people at her school what she was doing.

In video evidence the victim recounted two years of “hell”, in which she repeatedly contemplated taking her own life as she was traded to different men almost every day for “months and months”.

The jury of six men and six women were told Ali Sultan already had convictions in both 2012 and 2015 for “similar offences against young girls”.

A third man, 35-year-old Shafiq Younas, of Regent Street, Wellington, is accused of orally raping the youngster in the same churchyard in Wellington.

Another male, Nazam Akhtar, 35, of Victoria Avenue, Wellington, has been charged with rape, in an incident in which the girl was allegedly driven to a lane in a car along with Ali Sultan, Hussain and another male.

Mohammad Rizwan, of Mafeking Road, Telford, who jurors heard also worked at Perfect Pizza … allegedly forced the girl to perform sex acts and is facing two charges of indecent assault. The jury were told Rizwan, 37, will claim in his defence he and the victim had a consensual relationship, when she was aged 17.

The men deny any wrongdoing. The trial continues.