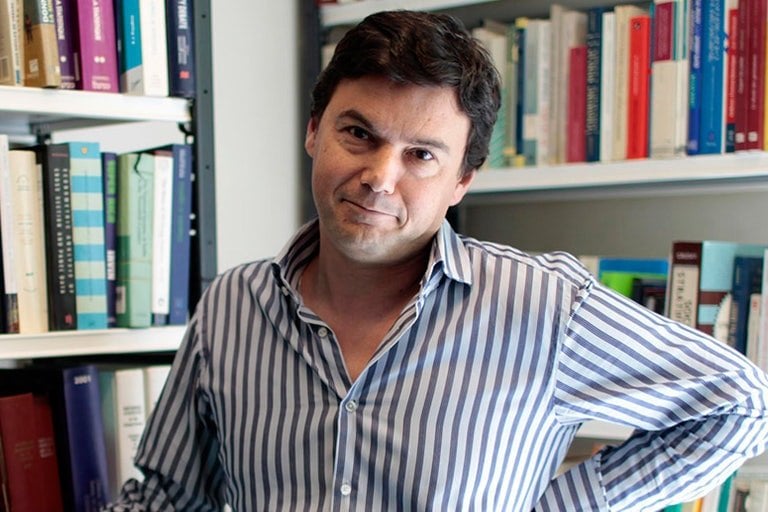 Thomas Piketty is an economist who shot to world fame with his surprisingly best-selling book, Capital in the Twenty-First Century. It was well-written and filled with data; although very long, it was an easy read and even if its conclusions were dangerous or wrong-headed, almost everyone would have learned a great deal from it.

His latest book, Time for Socialism, is not nearly as good; indeed, it seems like a capitalisation, if I may so put it, on his fame. It is a collection of his articles in Le Monde from September 2016 to January 2021, with an introductory essay written in February of the latter year, and it is both dull and repetitive. Sometimes one feels as if it is an attempted refutation of the dictum of Heraclitus that one cannot step into the same river twice. One quickly begins to recognise the tropes. For example, the author’s proposals for a proper European Union assembly with real powers, he assures us, has “at least the merit of existing.” It is doubtful whether existence is a predicate, let alone a merit; and even a terrorist plot must have “at least the merit of existing.” This is a book neither to be read from cover to cover nor to be dipped into, though I did the former.

Piketty still writes clearly, though without much imaginative verve, and he has obviously consulted a lot of data. He is intelligent, knowledgeable, and decent, with a very firm grasp of unreality. He believes in a world in which economic levers act frictionlessly, or to borrow the description a doctor of my acquaintance has used with regard to his own medico-legal reports: “You turn the handle and the sausage comes out.”

There is no difference in his world between investment and expenditure. Thus, when he correctly ascribes low productivity in Britain to the low educational level of the general population (such that, in a predominantly service economy, much of it is unable even to answer the telephone properly or with reasonable courtesy), he ascribes it to lack of expenditure on education. If only this were the case! But lack of expenditure cannot possibly explain why about a fifth of children leave school barely literate. Incidentally, France seems to be progressing, if that is quite the word, in this direction.

We read that “Research in the social sciences, of which economics is an integral part, whatever some may think, is and always will be hesitant and imperfect. It is not designed to produce ready-made certainties . . . we have to examine patiently to endeavour to draw some provisional and uncertain lessons.” Amen to that! But modesty or tentativeness is not Professor Piketty’s main characteristic, nor does prudence once enter into his proposals.

There is no awareness that deterioration is possible as well as improvement, or of the fragility of things. Nothing counts for him but equality. He is to taxation policy what Le Corbusier was to architecture: he wants to prescribe (and proscribe) for the whole world. Above all, no variation! He would tell us how much we may possess, how much we may leave to our descendants or receive from our ancestors, how much we may earn in a year.

As an egalitarian and firm anti-nationalist, he does not explain why redistribution should stop at national borders. But try telling the average Frenchman that from now on he must forgo half his wealth in order to raise up Somalia or South Sudan! The book sometimes reads as if it were written by an electoral propagandist for Éric Zemmour, acting as an agent provocateur.

Uniformity is for him the price of unity (his countryman, Frédéric Bastiat, did not make the same mistake). He has little regard for, or even awareness of, the potential political consequences of some of his proposals. In his European Assembly, for example, which would have real power (unlike the current European Parliament), France, Spain, and Italy could and probably would outvote Germany with regard to economic policy. It does not occur to him that there could be few better ways of arousing dormant German nationalism than this. Nothing is certain, but much is possible; and while he mentions the internationalism of Jean-Luc Mélanchon, the left-wing French politician, he might also have mentioned that M. Mélenchon wrote a book about Germany and Germans that could easily have been written by a patriotic Frenchman in 1916.

This, of course, does not dispose of the question of whether wealth taxes are in practice advisable or good for the economy. Professor Piketty argues that the French tax did not seriously damage anyone in France because the fortunes of the rich grew rapidly during the years of its operation. This is not as good an argument as he thinks it is: the question is not whether the fortunes of the rich continued to grow, but whether capital was lost to France by the emigration of rich people, to which the answer is probably yes.

His discussion of this question is not very subtle. He does not discuss the effect the constant threat of expropriation has on the decisions of people. Nor does he much address the question of how much of the increase in wealth is simply the result of asset inflation. I am, to a certain extent, a beneficiary of this asset inflation, in the sense that my wealth on paper has grown considerably. But as a typical member of the old-fashioned provident middle classes, I saved for years not to become rich on paper, but to avoid poverty in old age. As returns on paper wealth are exiguous, and having memories of inflation of 15 per cent a year (which the professor is too young to remember), I have very little idea of how much I need to accumulate to secure my desire for modest comfort. In other words, the constant shift in the value of money has profound effects on mentalities.

Not only does the professor leave mention of money creation and low interest rates to the end of the book, and then only en passant, he does not discuss why low interest rates should have been necessary for so long. They are needed because we live on borrowing, both privately and publicly. The trick has been to contain inflation in ordinary living expenses by outsourcing production and supply to countries with cheap labour, which can be done as long as some faith remains in the value of our money, or at least as long as there is no better alternative store of value (this era may be coming to an end). We can thus print, or create, as much of the stuff as we like and think we grow rich—at least some of us can. Thus, to whosoever hath, to him shall be given, and he shall have more abundance: but whosoever hath not, from him shall be taken even that which he hath.

The habit of spending more than one’s income, not as an occasional necessity, but as a plan of life is imprudent and will suffer the penalty of imprudence—even if, in the political sphere, there are those who would hope that bribing the electorate might keep the whole system going forever. To all this, Professor Piketty has one sovereign remedy: tax the rich.

He thinks this is democratic because many, perhaps a majority, would vote for it. He has no problems with majoritarian democracy (provided the majority agrees with him): How can democracy be tyrannous? Thus, he sees no drawbacks in Senator Warren’s proposal to set a wealth tax and to provide—provide!—“an exit tax equal to 40% of total wealth for those who choose to leave the country and relinquish American citizenship.” Moreover, “the tax would apply to all assets, with no exemptions, with dissuasive sanctions for persons and governments who do not transmit appropriate information on assets held abroad.” Not only is this tyrannous with regard to individuals, but it is tyrannous with regard to international relations, providing a justification for American jurisdiction over the whole world. Needless to say, China, Russia, and India would never accept this, and might find allies. Conflict could become endless.

The answer to this little problem is obvious to Professor Piketty: a wealth tax worldwide, such that there would be nowhere for anyone to hide. There might be a few little teething problems with implementation—for example, who is to oversee it all—but think of the benefits: lie back and think of England! Professor Piketty has found the elixir of life, and it is taxation.

Never once do considerations other than increased equality enter into Professor Piketty’s mind. There would be no privacy in his world, since the transparency of all dealings, incomes, and expenditures would be absolute. His utopia is tyranny in the name of virtue, the only virtue that counts: equality of outcome. Limits do not worry him. When he speaks of future immigration into France and Europe, he—who is so keen on measurements—suddenly does not speak of numbers, and certainly not of selection. For him, an immigrant is simply an immigrant, no matter where he comes from. He brings nothing with him but his common humanity, and therefore there is no need to take notice of any of his particularities. He is a unit, not a human being. Professor Piketty is thus the opposite of Joseph de Maistre.  “In my life,” said de Maistre, “I have seen Frenchmen, Italians, Russians, and so on. . . . But as for man, I declare that I’ve never met him.” In his life, Professor Piketty has met man, but never Frenchmen, Italians, Russians, and so on.

It is necessary to hold these two attitudes, both of which contain elements of truth, in creative tension. There is no such tension in Piketty’s work.

PrevFEAR INSTEAD OF COURAGE: America under Covid
‘Intellectual Terrorism’ in FranceNext