President Trump and the Red Line in Iran 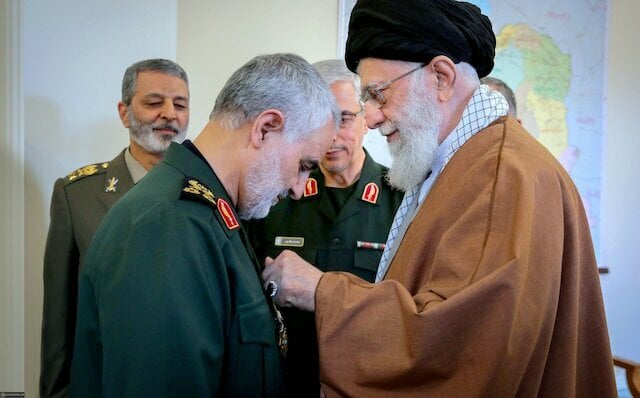 Quinquireme of Nineveh from distant Ophir, with a cargo of ivory, and apes and peacocks, sandalwood, cedarwood, and sweet white wine, rowing home to haven in a safe place in the Middle East.

That place is not easy to find. In March 2019 the Iranian Supreme Leader Ali Khamenei awarded General Qasem Soleimani the country’s highest military medal, the Zolfaghar, and declared he wished him “martyrdom” Whatever the Supreme Leader meant by this is open to conjecture, but the “martyrdom” came quickly in unmistakable fashion.  On January 3, 2020, Qasem Soleimani, together with Iraqi- Iranian militia leader Abu Mahdi al-Muhandis, was assassinated by a U.S. drone strike, a targeted killing, near the Bagdad airport in Iraq. The given explanation for the strike given by the Trump Administration was that he was planning an imminent attack on U.S. diplomatic and military personnel in the region. The official Iranian version for the presence of Soleimani in Iraq was that he was on a diplomatic mission.

Soleimani’s fate was sealed because Iran had crossed the “red line” that President Donald Trump had set, action would be taken by the U.S. if an American were killed or the American Embassy besieged. Trump was resolute and ordered the strike without Congressional approval, and regardless of criticism he had ignored a ban on assassination. Yet the ban was not applicable to terrorists, and Soleimani, martyr or not,  was one of them.

One does not expect graciousness in participants in national or international politics. Certainly not the kind exhibited by Pope Francis who on New Years’ Day 2019-2020 apologized for his behavior the previous night. He had slapped a woman’s hand when she grabbed him while he was greeting people at the Vatican. The response of Iranian Supreme Leader Ali Khamenei was different, his action was to threaten a direct attack on U.S. interests, and to kill the U.S. military commander. The new leader of the elite Quds force, General Esmail Ghaani, a member of the revolutionary guard since 1982, declared that the US would be expelled from the Middle East. In addition, though there does not appear to be any logical relationship, he and other Iranians threatened to bomb Israel if the U.S. acts again. It is revealing that the Revolutionary Guards do wear boots with the Star of David on the sole so they always stamp on Israel.

Revenge may be sweet but in spite of dire foreboding and flamboyant rhetoric Iranian response to Trump was mild in both Iran and Iraq.   In Iraq, part of the mainly Shite parliament voted a non- binding resolution for the expulsion of U.S. troops, estimated at 5,200, from the country. Iran responded on January 7 2020 with 22 missiles fired from Iran at two U.S. bases, Ain al-Assad in Western Iraq, and Erbil international airport in the north. They caused little damage and no casualty. Possibly, the action was a “slap in the face” to the U.S., and “proportionate” and the missiles may have been deliberately fired into unpopulated areas, or advance notice of the strikes may have been given.

At present there is no evident indication of a possible broader conflagration between the U.S. and Iran, though warning signs have been given, especially by the commander of the Iran-backed Popular Mobilization Forces in Iraq ,Qais al-Khazali, who vowed revenge for the killing of deputy leader al-Muhandis, and the mysterious  end of the three year old Ukrainian Boeing 737-800 with 176 aboard which crashed three minutes after take-off in Teheran.   For his part, Trump on January 8, though emphasizing that Iran will never be allowed to have a nuclear weapon, and making clear that the U.S. had powerful weapons, urged the European countries and NATO to deal with Iran to make the world a safer and more peaceful place. He suggested s peace arrangement if Iran gave up its nuclear ambitions.

Policy toward Iran should be bi-partisan but it was not surprising that major Democrats have not been unequivocally approving of the killing of Soleimani or held the view that evidence of his plans for an imminent attack is not available. Speaker Nancy Pelosi implied equivalence  in stating that “we must ensure the safety of our service members,” by no needless provocations from the Administration, while demanding that Iran cease its violence. For her the strike on Soleimani was provocative and risked escalation. Congressman Adam Schiff (Dem-Cal) said he was  aware that the killing of Soleimani can have dire consequences and is  not satisfied that the killing was due to either preventing attacks on U.S. or reducing the risk to American lives,  He accused Trump of impulsive  judgment, and want Congress to “fully engage,” presumably by endless hearings. Candidate Joe Bidden said the president had tossed a stick of dynamite into a tinderbox .

Yet the killing of Soleimani is not a declaration of war on Iran, nor is it comparable to the assassination of Archduke Franz Ferdinand of Austria, an act that led to World War I. 2020 is not 1914.

The assassination may be challenged as bad policy, but it is not a crime, nor will it transform the Middle East, nor does it give permission to anyone to attack U.S. bases, naval ships, military personnel, nor will it impede the fight against ISIS.  On the contrary, it is possible, though not certain, that it might lessen or even stop planned attacks against the U.S.

In 2008 General  David Petraeus, former commander of U.S. troops in Iraq, referred to Soleimani as a truly evil figure, and in 2020 said his killing was more important than that of Osama bin Laden or the ISIS leader Abu Bakr al-Baghdadi.

The basic fact is that Soleimani,62 years old, a popular and well-publicized  figure, since 1998 was the commander of the Quds Force of the Islamic Revolutionary Guard, (IRGC), the elite unit responsible  for foreign operations, a body designated as a terrorist organization by President George Bush in 2007. Soleimani was a forthright enemy. He warned Trump, “I myself and the Quds forces can defeat you… There is no single night that we sleep without thinking of how to destroy you.”

Soleimani has been the pivotal figure for implementing Iran’s Islamic thrust and building Shiite militias in the world, and was known a major international terrorist. He was instrumental in actions in Iraq, Syria, and Lebanon, He was the operational commander responsible for attacks that killed 608 U.S. soldiers during the Iraq war. He supported Bashar Assad to maintain power in Syria. He deployed in 2013 2,000 Hezbollah soldiers to help capture the town of al-Qusayr, a crucial point in the Syrian war, and helped the 2016 Aleppo offensives. He was almost certainly behind the killing of the former Lebanese prime minister Rafik Hariri and 21 others in a car bombing in Beirut. He was responsible for supplying weapons to Hezbollah, now 45,000 fighters with 120,000 missiles able to fire 200 rockets a day, in Lebanon to threaten and kill Israelis. Iran shot down a U.S. drone, attacked Saudi oil facilities, and attacked U.S. bases in Iraq. Pro-Iranians were responsible for the attack on the American Embassy in Baghdad which, apart from other aspects, was a violation of international law and American sovereignty.

President Trump has hinted that any further retaliation, which so far has been measured, by Iran would lead the U.S. to respond with 52 attacks, symbolizing the 52 hostages taken by Iran after being seized at the U.S. Embassy in 1979, including those in cultural sites. It is not yet absolutely clear why Soleimani, the master terrorist,  was in Iraq, but it is probable he was more interested in killing heretics, Americans and Jews, than in examination of the cultural treasures of Iraq.

Some of Soleimani’s colleague are equally uninterested in cultural treasures. The Iran Revolutionary Guard chief  Hussein Salami told the millions of mourners for Soleimani in Teheran that Iran would hit any places supported by the U.S.  He proclaimed, “we will set them ablaze,” amid crowd shouting, “Death to Israel.”

Was the action of Trump necessary and prudent? What will be the political and military consequences? Future weeks will give the answer. He remains adamant about the undesirability of the 2015 nuclear accord, in his opposition to any Iranian nuclear weapon, and in the maintenance of sanctions against Iran. Perhaps even more important by his action Trump has shown a willingness to act, and that there is no iron in his soul.