President Trump, The Diplomat in Europe 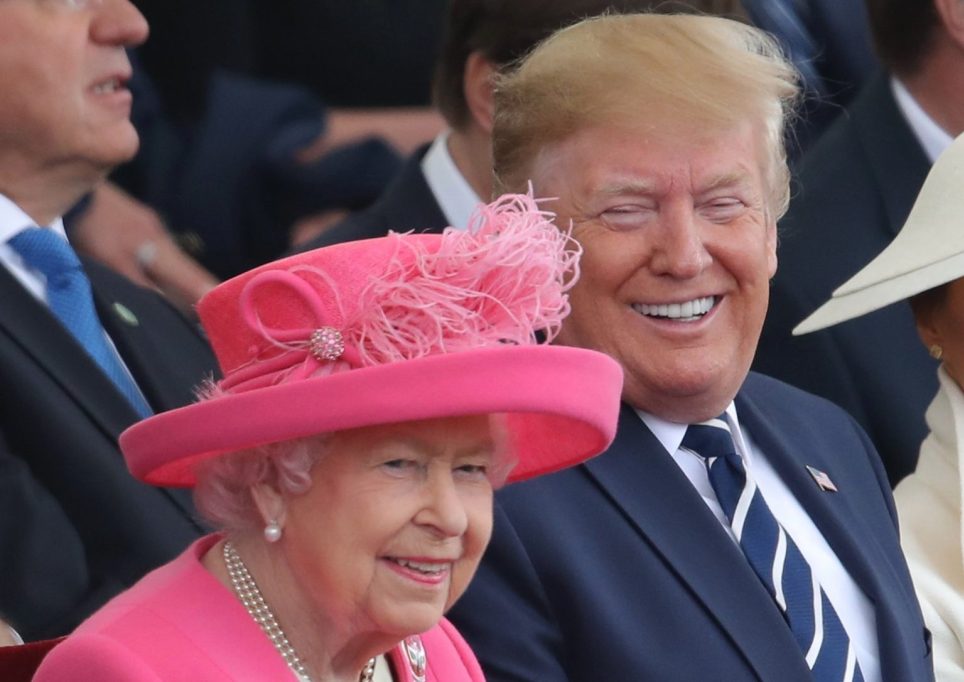 The test of a zealous politician, F. Scott Fitzgerald might have said, is the ability to exhibit two opposed forms of behavior at the same time, and still retain the ability to function. No one in the contemporary political world exhibits this more then President Donald Trump, unconventional, crude, aggressive tone, uncouth, plain speaking, tweeter of attacks on opponents, and intemperate at times, but a model of good behavior, modest, language, diplomatic skill, and charm, at other times as he displayed in London and in Normandy in June 2019. Yet the contradiction remains. Trump, together with the other leaders of the former Allied countries, on June 6, 2019, signed the multi-national D-Day proclamation honoring those who lost their lives on that day, but he self-centeredly signed at the top so his name came first.

Trump’s effect on others is similarly contradictory. In Washington, D.C., Nancy Pelosi, (Dem-Cal) Speaker of the House, on June 3, 2019 proclaimed, “I do not want see him impeached, I want to see him in prison.” Two days later in London, Queen Elizabeth II, who seemed, as shown on photos, to have enjoyed his company, in saying farewell to the President after his visit to London, said to him, “I hope you come to this country again soon.” Trump replied, “It was a great honor to be with you.”

In an interview on June 6, 2019 Trump said the meeting with the Queen was incredible, “We had automatic chemistry…the Queen had an animated time.” In politics, ceremony plays an important role, as does personal warmth with hugs and handshakes. Trump was gracious in honoring and paying tribute to the fallen and to veterans of D-Day on a cemetery near Omaha Beach, where 2,500 U.S. troops were killed on one day, and where he spoke of the brave men who showed a fierce patriotism, and saved freedom. The Queen was even more gracious in the ceremony she arranged for the President.

If Shakespeare is to be believed, the meeting of Cleopatra and Antony was a setting of ceremonial splendor. She was in her barge dressed in a cloth of gold, and the poop was beaten gold. The Roman -Egyptian meal she served must have been extravagant, a mixture of Cairo and Rome food, lamb kebab and scaloppini di vitello a piacere.The food may have been delicious but the outcome of the two lovers was tragic. Even more extravagant was the banquet at the Field of the Cloth of Gold, a summit between the young rivals, English King Henry VIII and French King Francis 1 in June 1520. It featured feasts, costumes made of cloth of gold, a fabric woven with silk and gold thread, a temporary palace, flowing red wine, 2,200 sheep and other meats consumed. In all an extravagant display, but one that was followed by minor political results.

Another banquet, though not quite of the sumptuous order of 1520 was held in London in connection with the commemoration of D-Day, the invasion of Normandy on June 6, 1944 by the Western allies of World War II to fight Nazi Germany. President Donald Trump visited London for his first official state visit by the UK to celebrate the special relationship between the UK and the U.S. before going to the D-Day ceremonies in France.

The meeting of President Trump and the 93 year-old Queen Elizabeth II, the longest serving leader in the world, and the reception on June 3, 2019 was lavish and reminiscent of British grandeur. Distinguished protocol was extended to Trump when the Royal Horse Artillery Troop led 71 horses into place to fire 82 rounds in his honor. On the lawn of Buckingham Palace,Trump inspected the guard of honor formed by the Grenadier Guards wearing their bearskin hats.

At the banquet in Buckingham Palace Trump sat next to the Queen. The 170 guests were served steamed fillet of halibut, with watercress mousse, asparagus spears, chervil sauce, saddle of new season Windsor lamb, vegetables and port sauce, strawberry sable with lemon cream, assorted fresh fruits, petit fours. Wine was a rare great vintage, Chateau Lafitte Rothschild 1990 which Trump did not drink since he is a teetotaler.

Next day, on June 4, 2019, Trump hosted dinner for the Royal Family at the American Embassy in London, with a menu that does not appear as precious as the banquet at the Palace: it was listed as grilled filet of beef, heritage tomatoes, pommes Anna, summer berries and home-made vanilla ice cream. Wines were Chardonnay, Pinot noir, and Brut reserve.

Perhaps the heavens looked kindly on Trump. The weather was fine, unlike last year when rain prevented Trump for talking at the ceremony. This year there were still demonstrations, but they were small. If there were no concrete achievements from the events, there had not been expectations of any. The events showed Trump displaying empathy. He stopped his speech on D-Day to embrace a 94 years old veteran who landed that day near the Omaha beach, (Colleville-sur-Mer). His speech on June 6, 2019, staying on script, was moving, referring to the U.S. troops who “knew they were carrying on their shoulders not just the pack of a soldier but the fate of the world,” was even praised by Jim Acosta, CNN White House correspondent, probably his most frequent critic.

Donald Trump is a puzzlement. There are many facts of which he could be more certain, including whether to join with other nations in alliance. Trump did speak of his respect for the Royal family, of friendship between the UK and the U.S. at some points, and his closeness to President Emmanuel Macron. Trump and Macron, who have had a testy relationship in the last year, embraced each other with a handshake, for Macron the “moment of truth,” and a hug.  Macron praised the U.S. fighters: “America, dear President Trump, is never greater than when fighting for others’ freedom.”

Yet Trump could not refrain, at other points, from commenting, not only on U.S. figures like Charles Schumer, Nancy Pelosi and Bette Midler, but also on British political personnel of all parties, and on domestic UK issues such as the National Health Service, Northern Ireland and Brexit. Among the UK politicians, were the outgoing Prime Minister Theresa May, potential candidates to succeed her, MIchael Gove, Environment minister, Jeremy Hunt, Foreign Secretary, and Sajid Javid, Home Secretary. He did not meet with but had a long telephone conversation with Boris Johnson, presently the leading person to become prime minister, and whom Trump said would be a great prime minister. Trump turned down a meeting with Labour Party leader Jeremy Corbyn whom he termed a “negative force.” In a somewhat indiscrete act, he met with Nigel Farage, founder of UKIP, independence party, and founder and leader of Brexit, an hour after his press conference with PM May.

Trump had an extended meeting with Prince Charles and discussed serious issues, particularly climate change, and praised the Prince for his “passion for future generations.” But he was less cordial to others. He admitted using the word “nasty” about Meghan Markle, Duchess of Sussex, who had made critical remarks about him in 2016. He called London mayor Sadiq Khan, who had made critical remarks about him, a “stone-cold loser… who should focus on crime in London not on me.” Trump was replying sharply to Khan who had compared Trump to fascists of the 1930s and 1940s, and called Trump the “poster boy” for the far right. For Trump, Kahn had done a bad job as mayor of London. But he spoiled the criticism by stating that Khan reminded him of “our very dumb and incompetent mayor of NYC, who has also done a terrible job.”

At no point in his remarks during the three day event did Trump mention MEGA or boast of U.S. accomplishments under his administration. On the contrary, he pledged, though not as strongly as President Macron or Theresa May, his willingness to join with allies to solve international problems peacefully. Outgoing PM May gave Trump a copy of the 1941 Atlantic Charter. The Queen at the banquet spoke of the importance of international institutions, and  of the time when Britain and the U.S. worked with other allies “to build an assembly of those institutions to ensure that the horrors of conflict would never be repeated.” Trump himself said that the men of D-Day battled not for control, or domination, but for liberty, democracy, and self-rule. It remains to be seen if his remarks at the D-Day events, unusually well received by almost everyone, will change any of Trump’s policies on multilateral issues.

It will be useful for U.S. foreign policy if Trump will resolve the contradictions in his behavior, and take heed, “Ourself will mingle with society and play the humble host.”