On a visit to Preston MEP candidate Tommy Robinson said that turnout for his rally was the best support he had been shown in the North West. At least 600 people gathered to hear him speak on Ashton Park tonight.

The turnout will be somewhat galling to the 40 or so people who turned up to a ‘Peace, Love and Milkshake Party’ in the city centre, to take a stand against the far-right activist.

Speaking from a platform to supporters holding English flags Robinson said: “I’m getting more and more confident as the days go on in this campaign. We are going to make history this week. Never before has an Independent won the European elections. This is part of a tidal wave that is sweeping across the North West.” 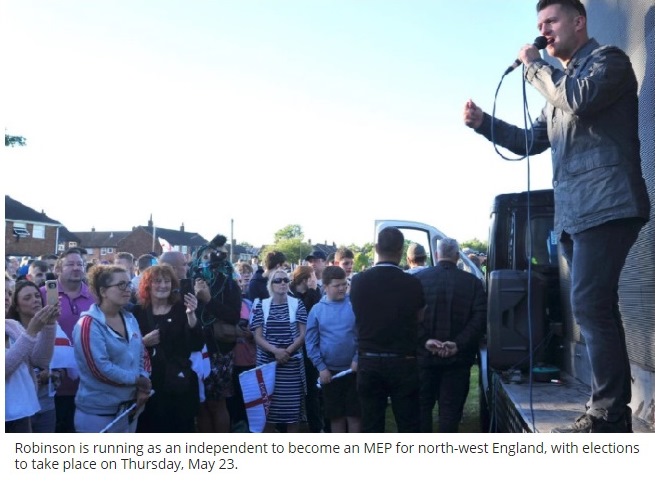 He went on to attack the media and political correctness.

“Too many people in this country feel censored,” he said. “They feel silenced. They are watching this country change for the worst and no one is saying anything about it. Not one politician is standing up against a certain section of the community in this country.”

Picking out a group of three Muslims in the crowd later Robinson said: “There’s one thing we all hate, it’s the establishment.” He added: “Lads I don’t hate you.”

Speaking after the rally a supporter of Robinson defended him and said: “The media has a leftist agenda. They distort things to fit with that agenda. There’s a lot of anger built up in members of the community and he’s obviously aware of that. He’s got to fight fire with fire. He’s mirroring the media’s tactics.”

Another supporter Michael Cottom from Larches, when asked about the threat coming from far-right extremists said: “Tommy Robinson’s against all extremists.”

The comments from readers of the Lancashire Post are all complimentary to this reporter.

? Wow, well done to you for publishing an unbiased account of something involving Tommy Robinson and his supporters and you didn’t mention the far right once or remind everyone that his real name is Stephen Yaxley Pork scratching Lennon. I doff my cap to this reporter!

? Huge respect for this journalist that reports what really happened. Sorry if your going to take flack from the left for it but thank you.

? All respect to you for quoting and reporting what the people are actually saying!

PrevAustralia rejects the politics of envy and a green-left redistributive agenda.
Erdogan’s Grand Plan For Turkish Schools In FranceNext