That was a witness describing how Mustafa Elmotalki, a Moroccan and failed asylum seeker indecently assaulted an 11 year old girl in a grocers in Croisilles (France) in 2018. This story is on page 117 of the book, one of hundreds, some even worse, that occurred across Europe (and Australia and the US occasionally) and are detailed in this book. 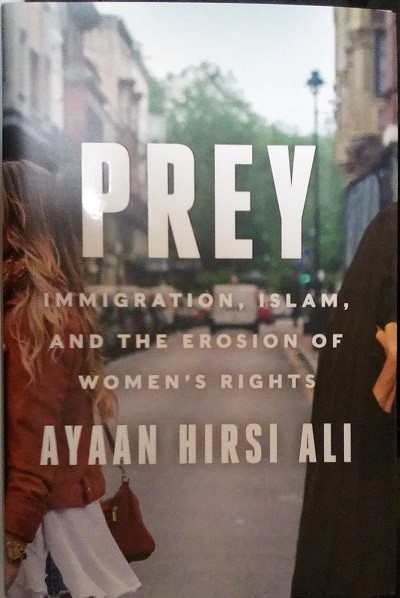 Any book by Ayaan Hirsi Ali is of international importance and well worth reading.  I disagree with her on a few issues; I think I am one of those right-wing populists your mother warned you not to talk to. But nevertheless she makes some valid and interesting points and the collection in one place of crimes occurring all over Europe makes the official line that these are isolated incidents look like the nonsense we know it to be.

Starting with the introduction when she explains how publication was delayed by the Covid 19 pandemic she explains the reasons why she wrote it.

Why does she focus only on Muslim men when sexual violence is a universal phenomena? “After all, when the Red Army invaded Germany between 1944 and 1945 Soviet soldiers committed many more crimes than those described in this book…”

As an aside I have read that many of the German women so raped reported that their assailants were from the second wave of Soviet troops, and from divisions recruited from the Soviet Central Asian Republics (like Uzbekistan, or Chechnya) who would have been of Muslim descent, albeit brought up under a regime that repressed all religion. The Red soldiers of European ethnicity who arrived first were too busy butchering every German male of any age they saw to have time to rape the women. Others who have made a closer study of that atrocity can confirm or correct my suggestion.

The main premise of the book is that the varied sex crimes committed against women of all ages, in Europe (but not confined to Europe as Australia and the US are mentioned) are affecting women’s lives such that the hard-won equalities of recent years are in danger of being lost as our lives are constrained by the dangers we might face if we exercise the freedoms we are used to.  Women not walking out on the streets after a certain hour, or unless in company, or wearing clothing modest to Muslim standards beyond our own. Obeying de facto sharia norms to avoid the unwelcome attentions and censure of Muslim newcomers to the district.

She speaks many times of her fear that ‘the clock will be turned back’ maybe 200 years, or to some other period of history. The threat is actually worse than that. In North west Europe, in England definitely, there has not been a time in written recorded history when in law an Englishwomen couldn’t and didn’t leave her home to conduct her lawful business freely, without let or hindrance.

She is honestly pro-immigration, having benefitted twice from the ability to migrate first to the Netherlands, then to the United States, but she is adamant about a migrant’s responsibility to integrate and be an asset to their chosen country.

The main book is in four parts and 18 Chapters. Some are statistics, carefully compiled and necessary to support the evidence and arguments that come later. Most of the case studies and court cases are from Germany and Sweden. Chapter 4, Taharrush Gamea (the rape game) comes to Europe is particularly harrowing, in my opinion. In Chapter 11 The Modesty Doctrine she quotes Phyllis Chesler on the subject of the miserable existence of the later wives under a polygamy regime, and how a Muslim woman expects abuse and sexual assault but it comes as a shock to a western woman. Dan Seligson’s observations in that chapter as to how polygamy gives rise to more violent and less prosperous societies is very interesting.

One thing we both agree on is in Chapter 8, The Broken Windows of Liberal Justice. Liberal Judges who give a lenient sentence for a first sexual conviction are giving encouragement to an offender who perceives mercy as weakness.

I was hoping to read more about the Loverboy phenomenon in the Netherlands, about which I expected she would have a wealth of experience from her years first with social services and later as an MP in the Dutch parliament. Plenty of news in English gets reported about incidents in France, Germany and Sweden, and even schoolgirl studies in French and German are enough to pick out the gist of a medium brow newspaper. But Dutch isn’t a widely known language outside that country. She mentions it in one paragraph only in Chapter 15, Grooming Gangs, and then continues with some Swedish examples about which I knew nothing, until now. It is of concern that few Swedes that she speaks to are aware of the Dutch Loverboys or the English ‘grooming gangs’ and their glaring similarities are overlooked.

That chapter on the grooming gangs was obviously of particular interest to me. For the purpose of the book she interviewed both Ann Cryer the retired MP who raised the alarm years before anyone else and Nazir Afzal the Crown Prosecutor for the North West who was finally able to break the conspiracy of silence and get some convictions. She also quotes from, amongst others, the work of Alexis Jay, Louise Casey, Quillam, survivor of the Rotherham gang Ella Hill, Andrew Norfolk and Anoosh Chakelian, author of ‘Grooming Rings are the Biggest Recruiter for the Far Right’. Far right, or not far wrong, like us or loath us, we did get people sitting up and taking notice 10 years ago.

It’s a shortish chapter but there was no need to reinvent the wheel; the subject has been more than adequately covered by Peter McLoughlin’s Easy Meat (covering the whole of England) and other books such as Survivors by Maggie Oliver which covered Greater Manchester including Rochdale.

The final part, Part IV is Solutions, Fake and Real, including Chapter 17, The Populist Problem. Followed by conclusion The Road to Gilead. She says of the Handmaids Tale exactly what I said when I first picked up the book in 1985 (and didn’t finish it for that very reason, I didn’t know it was going to become a cult for the neo-feminists) Margaret Atwood is ‘warning’ against evangelical Christians, but all this that she is describing is normal life in many Islamic countries. She’s picking on the wrong religion here. Coming so soon after the Salman Rushdie riots I wasn’t impressed. But I digress.

Her solutions are actually sound.  She is pro immigration but immigrants must integrate, work, learn the language, adopt the values of the country they have chosen to be home. Jews, Chinese, Sikhs have done this over a period of time; Muslims from whatever continent should do the same. Procedures re asylum need reforming, benefits don’t need to be so easy and tempting. We must uphold the rule of law and not accept sharia courts acting in parallel.  I’m not sure what she means by ‘stabilise the Muslim world’. We had the Muslim world stable once and now the British Empire is a dirty word. There is no appetite for a repeat.

I won’t argue with those suggestions but don’t think the aspirations of the ‘populists’ are completely incompatible. I want the likes of Adil Khan, Qari Abdul Rauf and Abdul Aziz who were convicted of offences in Rochdale out of my country, never to return. No sane person would want them roaming the streets intimidating their victims when they could be elsewhere, back in the land they have never really left, but are trying to re-create. Stripping Shabir Ahmed of his citizenship was right and once his sentence is served he can be on his way as well. Meanwhile Shamima Begum can stay where she is.

The solutions will be multi-faceted and are not going to please everybody. But we do have to talk about them. Left unchecked it isn’t just women who will suffer.

“We women can and must refuse to be relegated, as we have been in the past, as I have been in my own lifetime, to the status of prey. “

Miss Ali mentions Jews and Gays as others who will suffer, but anybody who has read any of the works of Bat Yeor will know, under Islam all dhimmis suffer, and the wrong sort of Muslim suffers, and the believing women suffer. So let’s not go there.