Priest Naim Ateek’s ‘theology’ of lies and hatred against Israel

Protesting Ateek and Sabeel is not a violation of free speech; it is a call for intelligent and honest speech. 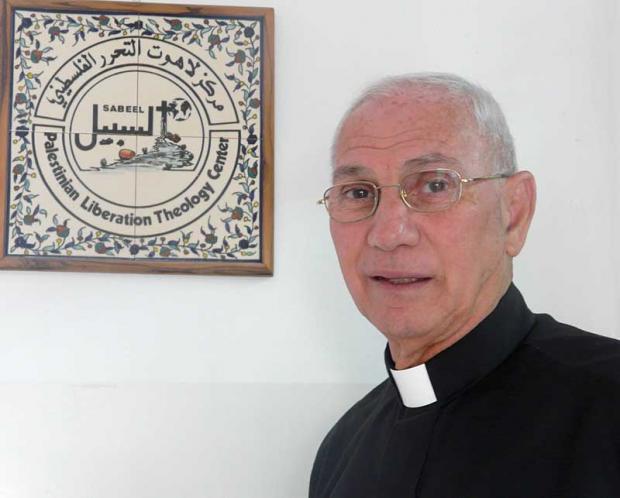 Naim Ateek, an Anglican priest who heads the St. Georges Church in Jerusalem and founder of Sabeel, an anti-Israel organization, and the Kairos Palestine document is a respected clergyman in Christian communities. He travels around the world lecturing in churches and universities, and has written “A Palestinian Theology of Liberation” (Orbis Books, 2017), published by Maryknoll, a Catholic organization in New York.

Because he is an Anglican priest, Ateek’s  message to Christians is widely accepted. His organization, Friends of Sabeel, has branches in North America, the United Kingdom, Scandinavia, Norway, Australia, Ireland, the Netherlands, Germany and France. His toxic message of lies and hatred is heard by tens of millions throughout the world.

Dexter van Zile writes (“Rolling out the anti-Zionist Catechism,” JCPA, 2012): “Ateek and Sabeel have become the most effective anti-Zionist evangelists  in the American mainline churches today,” including World Council of Churches (WCC), Disciples of Christ, United Church of Christ, Lutheran, Methodist, Presbyterian and Episcopal church organizations, and the Quakers (Society of Friends).

According to Professor Gerald Steinberg, president of NGO Monitor, a Jerusalem-based research organization, “Sabeel, Kairos and DCI-PS (Defense for Children International-Palestinian Section) are three components of a wide NGO network that propels the ‘Durban strategy,’ whose objective is the ‘complete international isolation’ of Israel as an ‘apartheid state.’ ” (“Blood libels and delegitimization,” Jerusalem Report, June 17, 2013)

Yet Jewish organizations have failed to counter Ateek effectively. Some have published monographs, papers and blogs about Ateek and Sabeel, but these efforts reach few, and those who are already convinced. They remain in the archives of good intentions. Some American and U.K. Jewish leaders do not even know about the problem; others rely on interfaith “good will.”

The question is why Jewish organizations have not responded effectively to growing anti-Semitism and anti-Israelism. As Jonathan Weisman wrote recently in The New York Times, “If not quite a crisis, it feels like a proto-crisis, something to head off … Yet American Jewish leaders … have been remarkably quiet.”

No organization or Jewish leader has challenged the churches and institutions that support Ateek and Sabeel. Writing op-eds and providing information on websites are not enough. Failure to actively and systematically confront Ateek has allowed him to spew his “theology” of hatred and bigotry.

The Israeli government, especially the Ministry of Foreign Affairs and officials dealing with Diaspora affairs, are also culpable. Ateek should be (but is not) considered an enemy of the state and the Jewish people.

Holding conferences on anti-Semitism and well-meaning speeches without sustained and focused leadership accomplish little or nothing. A new office in the Ministry of Strategic Affairs dedicated to combating the Boycott, Divestment and Sanctions movement is narrowly focused on legal efforts, with some success, but misses fundamental issues.

The following quotes are from Ateek’s book.

Ateek condemns Israel as a “settler colonialist” state that seeks “to dispossess the Palestinians—Muslims and Christians—of their land and replace them with Jews,” who engage in “ethnic cleansing and annihilation.” He criticizes Judaism as a form of “tribalism,” a “racist theology” practiced by people who worship “a god who has been created in the image of those who are thirsty for revenge,” based on “exclusive biblical texts that are being used to justify the ethnic cleansing of Palestinians.”

He justifies “Palestinian resistance” as “the right to resist the evil of illegal occupation of our country.” Therefore, “we must work for the liberation of the oppressors, as well as the liberation of the oppressed.” This struggle, he insists, follows the path of liberation taught by Jesus, and, in a sneaky effort to create empathy, he insists that “Jesus was a Palestinian”—a century before the Romans changed the name from Judea after crushing the Bar Kochba rebellion in 135 C.E.

Although he espouses “non-violent resistance,” which he identifies with the First Intifada in the late 1980s, including throwing stones and gasoline bombs (during which about 100 Israelis and 60 soldiers were killed, and more than 1,000 Palestinians were killed by intra-Arab fighting), he completely ignores the massive, virulent terrorism of the Second Intifada from 2000-03 (during which more than 1,200 Israelis were killed, and 10,000 seriously injured), and it continues to exist. Not a word.

Nor, inexplicably, does he mention the decimation and persecution of Christian communities that are under Palestinian Authority/Hamas rule. He ignores the fact that Christians are more protected in Israel than any other country in the region, except perhaps Lebanon.

“The faith Nakba has made it clear that if the Palestinian Christian community wanted to reinvigorate its religious life, it was essential to reexamine the meaning of its faith and Christian responsibility in light of Israel’s oppression of its people.” This is “the will of God … as expressed in the message and life of Jesus Christ.”

Towards that end, Ateek, Sabeel and the Kairos Palestinian document call for “a system of economic sanctions and boycott to be applied against Israel … to put an end to Israeli occupation of Palestine … ”

“Justice for Palestinians,” he proclaims, but not for Israeli Jews.

And then, lest we forget, because of “Western guilt” and to “speed up the implementation of the Balfour Declaration … the rights and wishes of the Palestinians” were ignored, and the State of Israel was declared (the “Nakba”). “Palestinians were the easy scapegoats … compelled to pay the price [for the Holocaust] by their dispossession and loss of homeland … Palestine and its people were sacrificed on the altar of Western guilt.”

“One cannot exaggerate the psychological influence that the Holocaust exerted in the creation of the state of Israel. If the Nakba necessitated the emergence of Palestinian liberation theology, the Holocaust was an essential part of its background.”

As former Chief Rabbi Jonathan Sacks explained: “Antisemitism is not about Jews. It is about anti-Semites. It is about people who cannot accept responsibility for their own failures and have instead to blame someone else. … The appearance of antisemitism in a culture is the first symptom of a disease, the early warning sign of collective breakdown … Antisemitism means denying the right of Jews to exist as Jews with the same rights as everyone else. The form this takes today is anti-Zionism.” (“The Mutating Virus of Antisemitism”).

British leaders, however, have not asked why the Anglican Church of England supports Ateek and Sabeel. The British media is silent.

Finally, Ateek and his supporters are not only a “Jewish problem;” they are—because they undermine communal trust and respect—a Christian problem.  Using his version of Christianity as a mask for his political/theological agenda, he savages the fundamental values and tenets of the religion which he claims to serve.

Protesting Ateek and Sabeel is not a violation of free speech; it is a call for intelligent and honest speech. It is a protest against hatred and propaganda, and a call for integrity and truth. That can be an important learning experience.